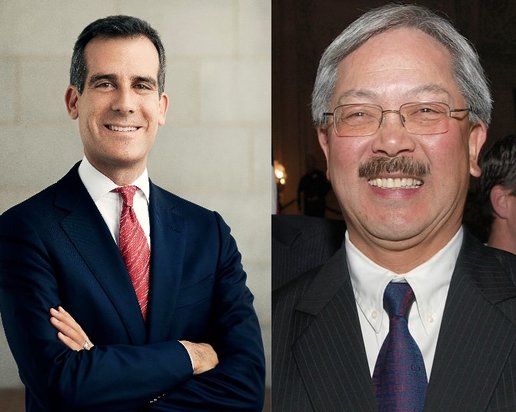 The Giants and Dodgers are bitter rivals, but that did not stop San Francisco Mayor Ed Lee and Los Angeles Mayor Eric Garcetti from organizing a Big City Mayors campaign in support of legendary organizer Fred Ross Sr. The campaign urges President Obama to confer a posthumous Presidential Medal of Freedom to for a lifetime of organizing low-income communities for social change.

Ross, best known for his role as mentor to Cesar Chavez and Dolores Huerta, trained and developed thousands of other Latino, labor, civil rights and community organizers across the country. He was born in San Francisco, but then led the campaign in the 1940’s that elected the first Latino to the Los Angeles City Council.

San Francisco’s Mayor Lee got to know Fred Ross Jr. as they worked together to try to pass Ellis Act reform legislation in Sacramento. Ross Jr., himself one of the nation’s leading labor and community organizers, expressed thanks for Lee and Garcetti’s effort: “I’m gratified from seeing the outpouring of support and recognition of my father’s legacy. To get so many mayors from across the country sends a strong message to President Obama.”

I have written previously about Fred Ross Sr’s extraordinary legacy, and have described the incredibly broad national support for his receiving the Medal of Freedom. My book, Beyond the Fields: Cesar Chavez, the UFW and the Struggle for Justice in the 21st Century details the enormous contributions Fred Ross Sr. and Jr. have made for economic justice.