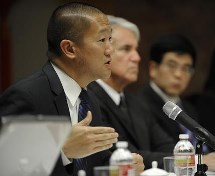 Last week, Victor Hwang was appointed to the Police Commission, unseating Angela Chan who served for the past four years. Hwang previously worked as Assistant District Attorney where he prosecuted hate crimes and human trafficking. With over twenty years over legal experience, he says he hopes to bring a balanced perspective to the Commission.

Hwang was born in New Jersey and moved out to California to attend college at UC Berkeley, where he became active in student organizing. It was his organizing around the Asian American community as a journalist where he realized that he wanted to go to law school to become a community lawyer.

“The Asian American community really lacked good litigators,” he told Beyond Chron. “It was true twenty years ago when I started doing this work, and I think that it continues to be true.”

“I think there is a tendency for lawyers to want to go into policy or into advocacy and not do the trial work,” he said.

He attended law school at the University of Southern California and began working in Los Angeles as a public defender before returning to San Francisco in 1996. He spent time working with the Asian Law Caucus as their civil rights attorney, and was part of a lawsuit against the Rohnert Park Police for racial stereotype killing of Kuan Chung Kao in 1997.

In 2003 and 2004 while working for the Asian Pacific Islander Legal Outreach, he says he handled a number of police misconduct cases including one where police in the Tenderloin shot a mentally disabled Chinese man.

From these cases, he worked to increase training for bilingual officers and trained them to deescalate.

With API Legal Outreach, he also worked to provide services in the areas of domestic violence, immigrant rights, and human trafficking.

“All through my career, as a public defender, a private civil rights lawyer, or as a D.A., I’ve worked around police and community related issues,” Hwang said.

Hwang believes this history of community involvement will help bring a balanced perspective to the Police Commission.

“There are folks on the commission who have been prosecutors in the past,” he said. “I certainly can bring to it a high level of understanding of how the system currently works.”

“I’ve worked in the system for a lot of years, not just San Francisco, but other jurisdictions. I can bring a higher understanding of how to improve the way that police respond community investigations.

Hwang said that it is too early to say what he wants to accomplish while on the Police Commission and wants to hear from community groups first.

“I don’t walk in there with my own agenda. I don’t think that’s the way people should represent the community,” he said.

“My role is to amplify the voice of the community,” he said.

Hwang will be sworn in as Police Commissioner on May 12.