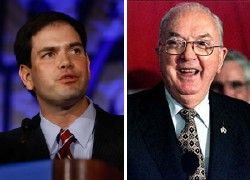 When the January 10 New York Times Magazine cover story described Florida’s Republican Senate Marco Rubio as potentially “the first Senator from the Tea Party,” it was clear that the nation’s far right has struck gold with its new identity. But these newly minted populist teabaggers have a long history.

In the 1930’s, they opposed Social Security, promoted white supremacy, and charged FDR with being a Communist. In the 1940’s, they passed anti-union laws and used anti-communist attacks to break progressive unions. In the 1950’s, they defeated civil rights legislation in the wake of the Montgomery Bus Boycott and Brown v Board of Education. In the 1960’s and 70’s, today’s teabaggers fought for “states rights” against federal civil rights, and fomented a racially charged backlash against domestic spending and the War on Poverty. Teabagger hero Ronald Reagan was elected President in 1980, and Jesse Helms and fellow right wing Republicans won the U.S. Senate. Teabaggers then controlled the White House under George W. Bush, and both houses of Congress from 2002-2006. Now, out of power less than a year, the media has transformed these longtime right wing reactionaries into populist forces out to reclaim the Constitution.

If anyone still doubts that politics is all about branding, the rise of the “teabagger” closes the case. Here we have a group of overwhelmingly white anti-tax crusaders with a long history of political backing for right-wing causes suddenly re-branded by the media as populist crusaders for the common good.

The dominant framing of the teabaggers, even by detractors, is that they represent some new force on the political scene. That’s why Florida’s Rubio is identified as the candidate of the “Tea Party,” rather than the latest in a long line of right-wing Republicans who become Senators and even Presidents.

And that the Republican Party has featured extreme anti-government, anti-tax Senate and House candidates in every national election for at least the past fifty years.

While Rubio’s home state of Florida is not typically associated with the violent suppression of African-American voters, attacks on civil rights marchers and other all too common features of right-wing activism, that’s only because of a lack of coverage. Paul Ortiz’s excellent Emancipation Betrayed shows the deep and racist roots of Florida’s anti-government right wing, years before the post-Castro arrival of Cuban immigrants moved the state’s Republican Party even further to the right.

The Right Plays By Different Rules

Since Barry Goldwater’s 1964 presidential campaign, the Republican right wing has routinely waged primary challenges and backed staunchly conservative candidates with a real chance to win. Far from being a “new” tactic, Rubio’s Senate primary challenge to moderate Republican Governor Charlie Crist (who is not even an incumbent) is business as usual.

While the media has reinvented a “moderate” Ronald Reagan, the former California Governor who publicly opposed Medicare and Fair Housing laws was widely perceived as too far right to win the presidency when he challenged President Ford in the 1976 Republican primaries. This race has similarities to the Rubio-Christ contest, as conservatives rallied to back the conservative Reagan against a fellow Republican who was expected to be a stronger candidate against the Democratic nominee.

The teabaggers and their predecessors realize that elections are cyclical, and that it’s essential to get one of your people in office when it’s your party’s turn to win. Democrats who cheer when right-wingers win primaries, believing that they will be easier to beat, often miss this point.

Recall how many felt that current Oklahoma Senator Tom Coburn’s comment about rampant lesbianism in East Oklahoma schools would doom his 2004 election chances against a popular Democrat. This extreme right-winger won easily, and would have been declared the first Senator from the Tea Party had conservative forces not already controlled the federal government.

Progressives ran no strong candidate in 1992, when it was their cyclical turn to win the presidency. And while Reagan and George W. Bush tried to give their core base everything they wanted, progressives have trouble getting Barack Obama to fulfill campaign promises during his first year.

As much as the media wants to portray the teabaggers’ as populist (notwithstanding their funding by wealthy interests), their tax policies are anti-working class and profoundly elitist. The Bush tax cuts overwhelmingly benefited the wealthy at the expense of most Americans, yet these “grassroots” anti-tax activists seek more of the same.

After imposing tax policies that derailed the economy and gave Democrats the White House and Congress, the right wing hopes to mount a comeback by repackaging and re-branding its failed agenda. Now, under the mantle of “teabaggers,” the right-wing’s backing of record budget deficits, squandering of the Clinton surplus, and reckless handling of the nation’s economy can be forgotten — or, even better, blamed on the Democrats.

One would like to think that the teabaggers would be no more successful than Sarah Palin in fooling the American people. But given how the Obama Administration dissipates hope on an almost daily basis, the artificial teabagger “movement” may prove the best available strategy for returning the right-wing to power.