The “Moz” Theology Comes to the Paramount 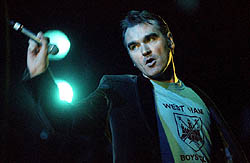 The term ‘rock gods’ gets tossed around a lot these days but there is only one Rock Deity whose fans seem to take that title literally: Morrissey.

Many fans and even impartial observers have likened a Morrissey concert to a religious experience. At his feet devotees gather in the footlights with outstretched hands, hoping the great man may stoop and reach out to them in acknowledgement of their adoration. Some of the most devout even scurry on to the stage and throw their arms around him trying to catch a quick embrace of their Beloved, before security guards appear and drag them off into the wings. One of Morrissey’s trademark rituals is to remove his shirt during performances and throw it into the crowd. The lucky fans who catch it hold tight to their treasure while other fans often congregate around them and ask to touch the holy garment.

Morrissey first rose to fame as front-man and lyricist for The Smiths, the wildly successful indie band he formed in the early 1980s with fellow Manchester native, Johnny Marr. From The Smiths’ 1986 hit There is a Light that Never Goes Out to his latest solo album, Years of Refusal, Morrissey has sung of deathbed epiphanies, ethereal travels and after-life reunions. In his 2006 release I Will See You in Far Off Places, Morrissey sings: “Nobody knows what human life is, why we come, why we go, so why then do I know, I will see you in far off places?” In the same song he promises his followers: “…one day I will close my eyes forever, but I will see you, I will see you in far off places.”

If Moz, as he is fondly known by many of his fans, is truly a sacred figure, then what constitutes the central tenets of the “Morrissonian” religion? The answers to that question are readily apparent in the lyrics of many of his songs, penned over the last three decades. Morrissey’s belief in the immortal nature of the soul is a recurring theme in much of his work. He often sings of the survival of consciousness after death. In his early song A Rush and a Push and the Land is Ours Morrissey opens with the introductory line: “I am the ghost of Troubled Joe, hung by his pretty white neck some 18 months ago.” He continues “I traveled to a mystical time zone, but I missed my bed and I soon came home.”

For many of his fans, Morrissey’s lyrics are replete with obvious references and subtle innuendo alluding to a belief in the transmigration of the soul. In various interviews he has mentioned reincarnation. Early on in his career, an interviewer asked Morrissey how it felt to collaborate with British songstress, Sandie Shaw, one of his childhood idols. Morrissey commented that meeting her “was almost like meeting oneself in a former life.”

To some of his followers, it is that sentiment that sums up the mystical allure of Morrissey. His songs create a sense of intimacy and familiarity—it is a feeling of having known Morrissey in a previous lifetime. Reading fans’ posts on any of the numerous websites devoted to him, one finds speculation about the artist’s past lives. Some believe that Morrissey has been a famous person in previous incarnations. Some fans believe he was Oscar Wilde, others have proposed that he was one of the Bronte sisters. It has even been suggested that Morrissey was a priestess in Ancient Egypt who led a sect of Bastet worshipers, the feline sun goddess depicted with the body of a woman and the head of a cat. This belief that he was a woman in a past life may help to explain the transgender nature of Morrissey’s appeal. When questioned about his own sexuality Morrissey has always rejected the labels of “gay, straight or bi” and has declared “I feel I’m a prophet for the fourth sex.”

In addition to the recurring ethereal themes of Morrissey’s lyrics, the second pillar of Morrissey’s theology is the belief that human consumption of animal flesh is inherently wrong. An unflinching vegetarian, Morrissey’s views of carnivores is best summed up by the title of one of his most well known Smiths era songs: Meat is Murder. Accompanied by sounds of whining animals and the bone-chilling screech of slaughterhouse machinery, the song’s solemn refrain echoes over and over “It’s death for no reason and death for no reason is murder.”

Stories of Morrissey’s unabashed defense of vegetarianism are legend. During his concert tours local venue managers are asked that sales of meat products at concession stands be suspended the day of Morrissey’s show. A vocal supporter of PETA, Morrissey has always been unapologetically outspoken in his advocacy of animal rights. Although all of his fans are not vegetarian, surely no fan has escaped hearing his message: the killing of animals to satisfy the gastronomic desires of humans is wrong. In Morrissey’s view, the institutional violence of the meat industry creates a society that is desensitized towards suffering. He has voiced his concern that humans view meat as an inanimate substance not linked to the living, breathing animals we see in fields. He has been quoted as saying “People don’t realize how gruesomely and frighteningly the animal gets to the plate.” This calls to mind another of Morrissey’s song titles: “Barbarism Begins at Home.”

Other rock stars may have legions of loyal fans, but few rival the passion and devotion of Morrissey’s followers. To many, this writer included, Morrissey is not only a singer and writer, he is a philosopher and ideologue.

Morrissey is appearing at the Paramount Theatre in Oakland this Saturday, April 18, at 8:00 pm.

Wallie Mason is a Human Rights and Animal Rights activist and a member of the American Immigration Lawyers Association. She lives in the east bay where she practices Immigration Law.