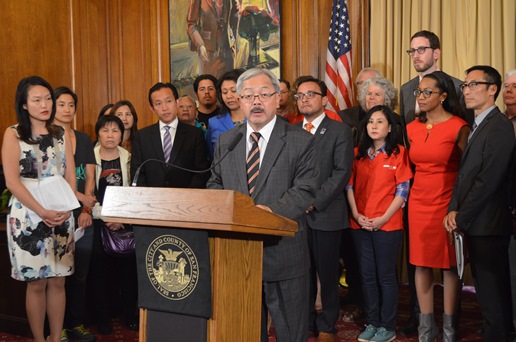 Mayor Lee, supervisors and representatives of workers’ rights, nonprofit, and business groups announced on June 10 that San Francisco will move forward with a consensus minimum wage ballot measure for November. The measure raises what would otherwise be an $11.03 local minimum to $12.25 on May 1, 2015, with raises each following July until $15.00 per hour is reached on July 1, 2018.

The proposed measure reaffirms San Francisco’s longtime national leadership on wages and other issues impacting low-wage workers. It includes none of the exceptions (like tip credits) invoked by other jurisdictions.

Since Mayor Lee announced support for a minimum wage hike last December, the question has come down to specifics. The challenge in reaching a consensus proposal was two-fold.

First, hundreds of nonprofit organizations expressed concern that they would be unable to afford the $15 minimum wage proposed by SEIU Local 1021 when it filed a ballot measure with the city. While the city would pick up this cost for nonprofit workers paid under city contracts, many nonprofit staff lack city funding.

The ultimate deal gives low-wage workers a nearly $2500 annual pay hike starting May 1, 2015. This rises to a $9000 increase once the $15.00 per hour begins in 2018. As I wrote a few days before the mayor’s announcement last December, “activists can pass no legislation or ballot measure that will do more to address income inequality in San Francisco in the next year than raising the city’s minimum wage.”

While many worked hard to get this deal done, special credit goes to Supervisor Jane Kim and SF Labor Council President Mike Casey. Both worked tirelessly to get worker and nonprofit groups to get a deal they could take pride in.

The minimum wage measure is expected to easily pass in November.

Linked to the minimum wage deal was a separate agreement closing a longtime loophole in the city’s Healthy SF program. Supervisor David Campos has repeatedly tried to close this loophole, which has allowed employers to take back tens of millions of dollars from health care accounts when the funds are not used.

Campos’ new plan will solve this problem of employers withdrawing funds that other employees need by removing employers’ incentive to put money in such accounts It is estimated that 35,000 additional workers in San Francisco will benefit from the change.

So not only will low-wage workers get a raise, many will also get greater health care coverage. Quite a day in the City by the Bay!

In fact, under Mayor Lee and the current Board San Francisco is in a golden era for progressive measures. Ideas like a housing trust fund were long pipedreams before becoming reality in 2012. Those of us who backed the 2003 minimum wage hike with its index to inflation thought the issue was largely resolved—which it was until Fight for 15 changed the debate.

On issue after issue, San Francisco is far ahead of other cities. It still has many problems, and economic inequality and unaffordable housing top the list regardless of the minimum wage hike.

But no city more aggressively pursues, and implements, progressive solutions.