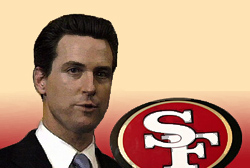 When incoming House Speaker Nancy Pelosi and Senator Dianne Feinstein take time from their post-election planning to urge San Francisco 49ers owner John York to keep the team in San Francisco, then you know that the city’s wealthy elite are in an uproar over the 49ers proposed move. Only a tiny percentage of San Franciscans would ever benefit from the luxury boxes and improved seating at a new 49ers stadium, and the dozen games per year does not provide meaningful jobs for neighborhood residents. Neither San Francisco’s now-abandoned 2016 Olympics bid nor a new 49ers stadium in San Francisco addresses the real needs of city residents, particularly those living in Bayview-Hunters Point. Mayor Newsom has handled the 49ers correctly, and deserves public support for maintaining his position that San Francisco taxpayers should not subsidize either the Lennar Corp or the 49ers billionaire owners.

Since the San Francisco Chronicle has long been first with any news about the San Francisco 49ers, its understandable that the paper is giving ongoing front-page coverage to the teams stadium plans. But there was virtually no talk about the importance of a new 49ers stadium in the recent San Francisco elections, even though there was a Supervisor’s race in the district housing Candlestick Park. This should confirm suspicions that most San Franciscans have far greater concerns than whether the 49ers play its games in Santa Clara.

The stadium debate, like that of the Olympics, is covered by the San Francisco Chronicle in the same way it provides multiple stories and large photo spreads for opening night at the Opera or Symphony. Football is a more blue-collar sport, but those preoccupied with the location of a 49ers Stadium or the 2016 Olympics (which would occur nearly three presidential elections from now) are those with the luxury of not being troubled by such present-day concerns as ensuring adequate funding for schools, maintaining health care for their family, or having the resources to remain in San Francisco.

For Pelosi and Feinstein’s friends in the Pacific Heights elite, the thought of sipping wine in a luxury box at a new 49ers stadium is exciting. These folks were also looking forward to being on the Official Welcoming Committee for the 2016 Olympics, so that the loss of the stadium and the Olympics was a double blow that necessitated Congressional intervention.

Feinstein is so upset about the 49ers move that she announced she is considering federal legislation to keep the team in San Francisco. Let’s hope the Senate holds off considering the measure until it brings home troops from Iraq, raises the minimum wage, grants legalization to immigrants, addresses America’s health care crisis, and otherwise focuses on the issues the public actually cares about.

As many have pointed out, NFL teams commonly build stadiums outside their home cities. On Sunday, a San Francisco football fan began the day by watching the Detroit Lions playing the 49ers (the Lions played in Pontiac, Michigan until 2002), and ended it by watching the Bears-New York Giants game played in the Meadowlands in New Jersey.

Moreover, it is not as if the 49ers longtime location at Candlestick Park has boosted economic activity in the surrounding neighborhoods. To the contrary, football stadiums are more likely to be an economic deadweight, as they occupy a huge amount of space for an activity that only occurs between 11- 13 times a year.

With the stadium issue gone, San Franciscans could begin a serious public debate about the best future for that portion of Bayview-Hunters Point. Currently, the 49ers and Lennar Corp. are calling all of the shots, even though neither is accountable to the community and the latter appears to have gained control of vast areas of public land without a public bidding process.

Lennar’s gentrification of the neighborhood was justified as necessary to help meet the costs of a new stadium. Without the stadium, Lennar is no longer needed, and the community could have affordable family housing rather than upscale condos.

Lennar is not happy about losing this no-bid opportunity to control scarce San Francisco real estate, and much of the blowback against the 49ers is likely coming from the national housing developer and its well-oiled team of lobbyists and political allies.

That’s why it’s so important that Mayor Newsom not be left alone to fight the pro-stadium forces. Stadium opponents cannot allow the media to pressure Newsom into giving up the store to get a deal, and must reject talk that Newsom will be forever viewed as the Mayor who “lost the 49ers.”

If you doubt the effectiveness of these pressure tactics, look what happened in Oakland. After Mayor Elihu Harris refused to give in to Al Davis’ exorbitant financial demands for returning the Los Angeles Raiders to Oakland, the Bay Area media tore Harris apart.

Harris was accused of preventing Oakland from becoming a “world class city,” and was described as arrogant and aloof from the common person in not appreciating the psychological lift that the Raiders return would bring.

The result? Harris felt compelled to agree to a revised deal with Davis that was just as bad as the original. Alameda County taxpayers have since lost nearly $20 million per year, and that means money not available for schools, health care, housing, or public safety.

Local sports-talk radio station KNBR spent Monday criticizing Newsom on the Olympics/49ers stadium. Evening host Damon Bruce repeatedly referred to San Francisco’s political leaders as “morons,” foreshadowing the kind of media attacks that Newsom will be subjected to in the days ahead.

Despite his claims that he sleeps with a football near his bed, Newsom, like Harris, lacks the blue-collar sports background that would facilitate his opposition to the 49ers extortion attempts. That makes it imperative that regardless of other differences people have with Newsom, that they give him the support he needs to allow the San Francisco 49ers to play their games in Santa Clara.

Every elected official involved with the Raiders deal suffered politically as a result. Mayor Newsom will politically benefit from holding firm against a new stadium, and it is also the best move for San Francisco’s future.