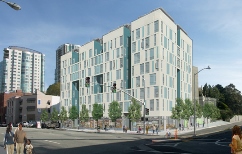 Public officials face a double standard when addressing housing and homelessness: “success” is evaluated not by those helped by programs and policies, but by those not assisted.

On April 21, the San Francisco Chronicle’s Matier & Ross wrote yet another column implying that San Francisco spends a huge amount addressing homelessness without much to show for it. They start by claiming that the city spends “about $34 a day per homeless person, whether they are on the streets, in a shelter or in supportive housing”—- ignoring that supportive housing tenants are by definition not homeless.

The columnists gloss over their own figures showing that 50% of the money allegedly spent on “homeless persons” should not be counted. They also ignore that state and federal funds comprise 20% of city homeless spending. If supportive housing were taken out of the city’s homeless budget and put it in the housing budget where it belongs, the city’s homeless budget would immediately be cut in half.

But worse than the reporters’ misconceptions about city homeless spending is their denigration of the entire supportive housing model; “The problem is that, between the housing market and the type of people in the program, as often as not they don’t move on. As a result, the housing fills up, and the street homeless population has stayed pretty much steady at about 7,000 for the past 10 years.”

It’s now a “problem” that people go from the streets to housing and don’t return to homelessness? I remember when Matier & Ross used to denounce “Camp Agnos” and ask why the city didn’t do more to house homeless people.

Now that the city is doing what the columnists said they should do, they have changed the goalposts so that the new test for success is the numbers still not housed.

That the visible homeless population is steady is actually a remarkable accomplishment given hugely rising homelessness in New York City and in most of the United States during this period. And while the numbers are “steady” in San Francisco, the people are different—that thousands of formerly homeless persons in San Francisco now live in permanent supportive housing is never promoted as a success by Matier & Ross.

Matier & Ross are like too much other media in holding homeless and housing spending to a standard that defines “success” in a way that it is unobtainable. What programs accomplish is deemed far less relevant than the ongoing unmet need.

Yet when Salesforce CEO Mark Benioff and his wife recently donated $100 million to UCSF’s Children’s Hospital, I didn’t see any reporters downplaying the donation because it will not solve the region’s health care crisis. Obamacare was also deemed a success with its over eight million new enrollees, even though far too many Americans remain uninsured.

Is BART a failure because tens of thousands of local residents still drive to work? Using the Matier & Ross argument, BART is a poor use of funds because its lack of “visible progress” should be defined by backups on the Bay Bridge, not the thousands using BART to get to work.

Matier & Ross have long criticized SF’s homeless spending without offering better solutions. Sadly, they have used their platform to convince the public that increased funding for homeless programs makes no difference, relying upon a criteria for success that can never be met.

It seems that every new piece of tenant-protection legislation enacted by the city, and every new pro-housing policy implemented by the mayor, is immediately highlighted for their insufficiency. Even advocates asct as if they feared that touting any progress would lead some to believe the problem is solved.

But downplaying real policy successes discourages activism. It also causes elected officials to shift attention to areas where they can get credit for successes.

In San Francisco, Mayor Lee is trying to address the city’s long failure to build housing by changing many policies that slow and discourage construction. Yet even if the mayor reaches his ambitious goal to build 30,000 housing units, single family home prices and rents on vacant units will not have declined. Development critics will then claim that building such housing “makes no difference,” just as housing homeless people is said to have no impact so long as thousands remain unhoused.

In order to win greater federal, state and local resources to address the homelessness and housing crisis, incremental victories matter. Don’t let the Matier & Ross’s of the world convince you otherwise. These victories expand the activist base and send a message to supportive politicians that their efforts are appreciated—-and are bringing real success.

Randy Shaw is Editor of Beyond Chron. He describes the potential for building support for homeless funding in his new book, The Activist’s Handbook: Winning Social Change in the 21st Century