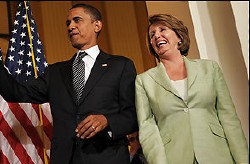 Senators Ben Nelson (D-NE) and Susan Collins (R-ME) have produced a Senate stimulus bill that kills jobs, eliminates affordable housing, guts education and gives billions in new tax breaks for the rich. Their hypocrisy is shameful. As New York Times columnist Paul Krugman put it, the Senate measure will “lead to substantially lower employment and substantially more suffering.” While the Senate’s $40 billion cut to the states has gotten the most attention — and was publicly denounced by Obama economic advisor Lawrence Summers — most striking is its attack on affordable housing. Despite record foreclosures and dramatic declines in low-income housing tax credits, the Senate reduced affordable housing funding by $4.7 billion while allocating $18.5 billion for a $15,000 home purchase tax credit. A credit that has no ceiling on either the buyer’s income or the sale price, or even requires that beneficiaries be first-time buyers! In fact, 42% of the Senate bill relies on tax cuts, despite the past eight years showing the failure of this approach. President Obama and House Speaker Pelosi have seen a progressive stimulus bill virtually wrecked by two conservative senators from small states — and must demand major changes in the Senate measure.

Before discussing what activists can do to improve the stimulus package, let’s acknowledge the political complexities.

First, Obama did not campaign for a specific stimulus package, so it does not present the case where “the voters have spoken” and will feel personally betrayed by Republican obstructionism. Polls show the public favors Obama’s stimulus stance, but the issue is not stirring emotions among the masses.

Second, the stimulus emerged so quickly after Obama’s inauguration that there was no time to build a grassroots campaign for a progressive package. This left cable news networks to spin their erroneous versions of the stimulus, and all but MSNBC has featured more Republicans than Democrats to discuss the package.

Third, Republicans do have veto power over this bill. Sixty votes are needed to go forward with a vote in the Senate apart from the issue of a filibuster.

This does not mean that Democrats must cave in and accept the flawed Senate bill. But it means that instead of coddling Specter, Collins and other “moderates,” activists in their states should be pressuring them to support a more effective package.

When I read that Nebraska Senator Ben Nelson had cut $4.7 billion in affordable housing funds from the House bill, and eliminated $2 billion in aid to distressed neighborhoods, some of which might have been used for housing, it brought back memories.

In 2000, I joined with other housing activists in a Washington D.C. meeting with the Office of Management and Budget (OMB) to get its support for a National Housing Trust Fund. OMB’s support was crucial because we had designed the Trust Fund to be funded by FHA surpluses, which OMB controlled.

While Clinton Administration officials said they wanted to support a National Housing Trust Fund but could not get budget authority, the OMB folks had a completely different take.

They disputed that there was a national affordable housing crisis, saying that Nebraska had plenty of vacant rental housing at affordable rents. At first we thought they were kidding, and then explained that while the housing crisis began on the coasts, and in major urban centers, it had spread to city and suburban areas across the nation.

But the OMB official insisted that the crisis was not widespread, and that Nebraska proved that we were overstating the extent of the crisis.

I do not recall the name of the officials we met with, but they may now well be advising Senator Nelson.

Nelson and Collins combined their elimination of affordable housing funding with the insertion of an $18.5 billion proposal from Senator Johnnie Isakson (R-GA) that gives a $15,000 tax credit to anyone buying a house. Unlike the House version, which limited the credit to first time homebuyers, the Senate amendment applies to a wealthy mansion buyer who already owns ten homes.

Senator Isakson promoted this costly, non-job producing amendment that fails to address any aspect of the nation’s housing crisis, but still voted against the stimulus package. Perhaps he realized that his amendment would not encourage buyers for the huge volume of foreclosed houses, but would instead boost the luxury home market. Or maybe the Senator heard from the experts, who agree that his amendment benefits those who do not need it.

Haven’t we done more than enough to help the rich buy mansions over the past eight years? And according to a prominent analysis, the Isakson amendment could actually increase foreclosures!

Mobilizing for the House Bill

While Barack Obama gave an incredibly hard-hitting speech in favor of the progressive House bill last Thursday in Virginia, his Organizing for America network is promoting passage of “President Obama’s recovery plan” without specifying the details. Since activists don’t clearly know what constitutes “Obama’s plan,” the best approach is to mobilize behind the original House bill.

Ideally, most of this mobilizing would occur in Maine and Pennsylvania, home to Senators Snowe, Collins and Specter. Ohio’s Senator Voinovich is retiring, but pressure on him could sway his support in light of the state’s desperate economic plight.

But San Francisco Bay Area activists can play a critical role by supporting Nancy Pelosi’s attempts to win a progressive package. San Francisco activists often criticize Pelosi, but she is the person most responsible for getting a House measure with billions for education, billions for affordable housing, billions in aid to states, billions for health care, and billions of dollars for the stimulus projects that progressives care about most.

Nancy Pelosi and her progressive House allies, not Barack Obama, have driven the stimulus package to the left. But she needs our help. As Maureen Dowd stated on February 7, “Nancy Pelosi told her leadership team that she had told the president, “I don’t mind you driving the bus over me, but I don’t appreciate your backing it up and running over me again and again.”

Pelosi needs to hear from her constituents that she should stay firm in rejecting the Senate package. And Obama needs to hear the same message, which, as was clear from his speech to the House Democrats last week, is consistent with his support for the House version.

While far too much can be read into what happens with the stimulus package, one point is clear: if Republicans benefit from obstructionism, this will be the pattern for universal health care, labor law reform, immigration reform, and every other major piece of progressive legislation. Accommodations to the more conservative Senate are understandable, but on issues of education, housing, state aid and assistance to distress neighborhoods, a line must be drawn.