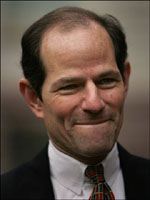 New York City is home to millions of recent immigrants, but racist, anti-immigrant attitudes still prevail in much of the state. This reality became clear in the wake of Governor Elliot Spitzer’s decision to grant drivers licenses without proof of legal status.

Polls show 72% of New Yorkers opposing Spitzer’s action, and the once-popular Governor has seen his popularity ratings plunge since he took a common sense action to help with ID cards for undocumented immigrants. While CNN’s Lou Dobbs and other opponents of Spitzer’s action claim that the Governor has opened the door to terrorism, Latino immigrants are not a group typically associated with such acts. Opposition to immigrant drivers’ licenses in New York, as in California, is really about racism, and its persistence even in the bluest of states.

New York Governor Elliot Spitzer has been having a tough time. After easily winning election last November, Spitzer got into a nasty fight with Republican State Senate leader Joseph Bruno that led the Governor’s staff to engage in unethical conduct. Now Spitzer has seen his poll numbers crash in response to his directive that driver’s licenses issue without applicants submitting a Social Security number.

Californians recall how Governor Gray Davis was recalled partly in response to his signing legislation for immigrant drivers’ licenses. Governor Schwarzengger quickly got the measure repealed.

Upstate New York, which lacks an immigrant political base, is apoplectic over Spitzer’s action. And since no part of that region is a terrorist target, the link between such acts and drivers’ licenses is tenuous, if not non-existent.

The anti-drivers license furor is driven by the same racist, anti-immigrant backlash that gives Lou Dobbs’ high ratings on CNN, and that has prevented Congressional passage of legalization for undocumented immigrants. Forget about the importance of ensuring that those on the road know how to drive safely—opponents claim this is about preventing lawbreakers from benefiting from their wrong.

Unlike Gray Davis, who let it be known that he only signed the drivers’ license law under pressure from Latino legislators, Spitzer is defiant in his support of the new law. It is all too rare to see a Governor stake out a strong but politically unpopular progressive stance, and Spitzer’s stance has won him plaudits from the state’s core progressive base.

But in a state with remarkable ethnic diversity, the fact that the drivers’ license is striking such a negative chord is disturbing. Not necessarily surprising, but disappointing to see how racist attitudes against Latinos are openly promoted by top Republicans in New York and by national television personalities on CNN.

The word is that Don Imus, fired for his racist insults against the Rutgers women’s basketball team, will soon be back on the air in New York City. That’s quite fitting in our “post-racism” age, and speaks volumes to the current furor over drivers’ licenses in New York.