How About the House Democrats Next? 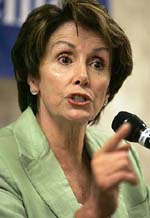 President Obama’s one-hour session last week with the House GOP caucus was a big success, and Republicans later admitted privately that they regret it was ever broadcast on C-SPAN. After all, he helped expose them for what they are – obstructionists with no realistic agenda. But while it’s good that he met with opponents who want him to fail, a more challenging task would be to do the same with the House Democrats, and I’m sure the public will be just as eager to watch it on C-SPAN. In the past year, Speaker Nancy Pelosi and the House Democrats have made major strides passing progressive legislation – only to see it die or lull in the Senate, with the President barely lifting a finger. Voters are getting restless, Obama’s approval ratings are down and Democrats are in trouble because they haven’t gotten much done. Now with the Senate acting like a House of Lords, it’s time for House Democrats to get a little respect – and give Obama a piece of their mind.

If I told you that in the past year, the U.S. Congress (a) redirected TARP funds from Wall Street to create jobs, (b) passed tough financial regulation reform, (c) passed a “cap-and-trade” emissions bill, (d) cracked down on corporate tax loopholes and (e) passed a decent universal health care bill that includes a public option, you wouldn’t believe me.

And you’d have good reason not to believe me, because none of those things have become law. It’s all part of what progressives thought they were getting when they voted for “change we can believe in.”

But all these bills (and more) passed the House of Representatives, often with not a single Republican vote. They have now either lagged – or worst, died – in the U.S. Senate, where Republicans automatically filibuster everything and conservative Democrats join them. EFCA also passed the House in 2007, but has been stuck in the Senate since.

In other words, the U.S. House – which more accurately reflected the will of the people in 2008 – has been usurped by an undemocratic House of Lords, and the Obama White House appears complicit in allowing this to happen. With Democrats in serious danger of having accomplished little this year, it’s time for a public accountability session. The President was willing to face Republican questions – now it’s time to face his own party.