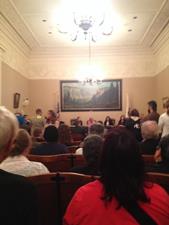 The drive to stop speculator evictions in San Francisco under the state Ellis Act passed a big hurdle on May 6 as Senator Mark Leno’s SB 1439 cleared the Senate Judiciary Committee by a 5-2 vote. The bill now heads to the Senate floor with momentum at its back.

With opposition strong at last month’s hearing, a large contingent of Ellis Act reform supporters traveled out to Sacramento. Over 60 seniors and low-income tenants from groups like the SRO Collaborative, Senior and Disability Action, and Chinatown Community Development Center came on two buses full.

Over 500 came to Sacramento in February for the bill’s introduction, and yesterday’s show of support was greatly needed. Yesterday’s hearing saw supporters outnumbering opponents, which remains primarily property associations and the real estate lobby.

Unlike the prior Senate hearing, opponents provided no testimony from landlords allegedly negatively impacted by the bill. And those most profiting from buying multiple properties and then quickly Ellising them and evicting tenants are nowhere to be heard in the public hearings on the bill.

Leno’s bill, which proposes to place a hold on Ellis Act evictions within the first five years of purchasing a building, has garnered broad support. Last week, sf.citi gathered signatures from 75 tech companies including Twitter and Salesforce in support of Ellis Act reform. Labor groups like California Labor Federation also came out to testify in support of the bill.

Alysabeth Alexander, Political Director of SEIU Local 1021, was among those speaking in favor of the bill. Prior to the hearing, IBEW 1245, various locals of the UFCW, the San Francisco Labor Council, and representatives of Building Trades Councils urged pro-union legislators to protect tenants.

Tech and labor is a powerful combination in California politics. Their alliance with tenants is making a major difference in securing strong Democratic legislative support for Ellis reform.

“Anyone who is in a rent controlled unit right now is vulnerable,” Leno said to the Committee. “There is literally no protection.”

He added that “Every Ellis Act eviction is a loss of an affordable housing unit.”

Jeff Buckley, senior advisor to Mayor Ed Lee, testified, “We found wide support because people from the business community, whether from Bay Area Council or sf.citi, whether the California Labor Federation or the California Building and Construction Trades—all of them have members who are affected the Ellis Act.” Mayor Lee has assigned the city’s Sacramento lobbyist to make Ellis Reform a top priority, and is actively working behind the scenes to secure support for the bill.

Gabriel Medina of the Mission Economic Development Agency spoke about the effects the Ellis Act is having on Latino communities in the Mission District.

“The Mission Latino community has been more adversely affected by the Ellis Act in San Francisco,” he said. “71 of the Ellis Act evictions betweem 2009 and 2013 were in the Mission—more than any other neighborhood.”

“Because of the proliferation of Ellis Act evictions, we’ve seen a twenty-one percent decline of the Latino community in the Mission district.” Medina and his allies played a key role last month in speaking with State Senator Ricardo Lara when he was in San Francisco for a media event. Once seen as a swing vote, the influential Lara (he heads the Latino Caucus) has now voted twice in favor of SB 1439 in two separate committees.

State Senator Hannah Beth Jackson voted for the bill after securing an amendment related to serial Ellis evictions. Her support will make a big difference when the bill is voted on by the full Senate.

Over 40 people testified in support including representatives from the California Labor Federation and sf.citi. The amount of pressure at the hearing yesterday was a reversal from last month’s, which highlighted the strength of this growing movement.

Senator Leno, who has worked tirelessly for SB 1439 and is widely respected by his colleagues, closed by speaking on the importance of Ellis Act reform to his constituents, and asked his colleagues to support his district bill.

“Clearly, all the working folks who took the day off from their busy lives to travel to Sacramento to make their case substantiates that this is a crisis in my district,” Leno said. “San Francisco has a higher rate of renters than any city. 65% of San Franciscans rent.”

Momentum for Ellis Act reform is building but organizing and advocacy must continue until the bill passes the Assembly and Senate and is signed into law by Governor Brown.