CDP Convention Wrap-Up: On the Value of Primary Fights 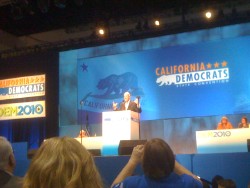 Having returned from my tenth California Democratic Convention (and my eighth as a delegate), it’s become clear to me that competitive primaries and endorsement votes are good for the Party. It gives rank-and-file delegates a meaningful role there, and boosts excitement. But that’s not the message the leadership always wants to convey. These events are about putting on a united face for Democrats, with Jerry Brown and Barbara Boxer facing tough challenges in November. We remember how Steve Westly and Phil Angelides killed each other for the 2006 gubernatorial nomination, but at their best these fights mobilize the grassroots. And a Party endorsement at the Convention can give a needed boost to candidates not wealthy or bought off by corporate interests.

Democrats gathered in Los Angeles this weekend, as Senator Boxer faces what may be her toughest re-election fight – and Jerry Brown’s likely G.O.P. opponent has shattered all fundraising records in state history. Delegates heaved a sigh of relief when Brown gave an energetic and animated speech on the Convention floor. And his challenge to debate Steve Poizner and Meg Whitman before the June 8th primary will finally turn the spotlight on how the two billionaires are hiding behind their paid media buys.

But with no real competition among Democrats to replace Schwarzenegger, progressives have been nervous that Brown will not excite the base. This left much of the weekend’s drama on down-ballot races, where competitive primaries meant candidates for Lieutenant Governor and State Insurance Commissioner sought the Party’s endorsement going into June 8th. And while there’s much controversy around that process, it’s a good thing for Democrats.

Gavin Newsom and Janice Hahn both failed to win the 60% to get an endorsement, so the Party won’t take a position for Lieutenant Governor. Which was a blow for the L.A. City Councilmember, who really needed a shift in momentum to balance Newsom’s financial and institutional advantage. Newsom got 52% of the delegates, with Hahn at around 42% – with the rest voting “no endorsement.” I was annoyed to get robocalled to death in the final week; neither campaign bothered to have a human call me and ask for my support.

For a job that is mostly a stepping stone to higher office and has few responsibilities, I ended up basing my vote on issues where the Lieutenant Governor can’t really do much. I spoke with Hahn about tenants’ rights, and she supports repealing the Ellis Act – which Newsom would not do when I asked him. Other delegates asked her about “split-roll” taxation, which she supports – and Newsom has apparently not taken a position. Still, Hahn was not an impressive candidate – and the race highlighted the need for more Democrats in the race.

One of the Attorney General candidates – Assemblyman Alberto Torrico – would make a great Lieutenant Governor. Torrico has talked a lot about funding higher education, and the Lieutenant Governor sits on the UC Board of Regents, but he’s instead running for a different job against five Democrats (including Kamala Harris) – where chances are slim.

But the value of a Convention endorsement was obvious in the race for State Insurance Commissioner – where Assemblyman Dave Jones got 60.9% of delegates. His opponent, Hector de la Torre, received 32% – with the rest voting for “no endorsement.” Jones had been working for months on this endorsement, having diligently cultivated the grassroots of the Party. One delegate told me that he called her more often than her own children.

In California where a statewide run costs millions of dollars, candidates who are not independently wealthy – or bought by corporate interests – are at a stark disadvantage. In down-ballot races like Insurance Commissioner (where the only campaign contributors likely to take an active interest is the insurance industry), this is especially true. A former legal aid attorney, Dave Jones has vowed not to take insurance money for this race – and unlike most statewide politicians seems to actually care about the particular position he’s running for. With the Democratic Party endorsement, Jones will now be the front-runner.

Competitive primaries where the State Party makes an endorsement allows delegates to serve a useful and powerful role at the Convention – rather than just listen to speeches, wear stickers and drink booze. And sometimes, that means being a bit controversial.

There was fireworks yesterday morning before the Convention adjourned, as progressive delegates challenged the Party’s recommendation of Jane Harman – a Blue Dog Congress member from Los Angeles who voted for the Iraq War. Harman once called herself the “best Republican in the Democratic Party,” and is facing a primary challenge by activist Marcy Winograd. The Winograd campaign successfully gathered signatures from 300 delegates to appeal the Regional Caucus endorsement – forcing a floor fight on Sunday.

Chairman John Burton and much of the Party leadership didn’t seem to appreciate this challenge. He even complained that it wasn’t fair that delegates from Siskiyou County (and elsewhere in the state) could overrule the will of delegates from Harman’s district. But the Party rules allow for it, and the Convention had a formal vote on the question.

In the end, Harman’s endorsement was ratified by a vote of 599-417. While Winograd is challenging Harman a second time (after running against her in 2006), my impression of her campaign was that she lacks a wide enough coalition to actually defeat an incumbent in the primary. She’s more of a Dennis Kucinich than a Howard Dean, and Harman has not been obnoxious to the extent of other conservative Democrats like Blanche Lincoln.

But I congratulated Winograd’s volunteers after the vote – and told them I was one of the 417 delegates who had their back on the Convention floor. Primary challenges are good for the Party, because it holds our leaders accountable and keeps them honest. And when politicians respond to fear, Jane Harman will hopefully get the message.