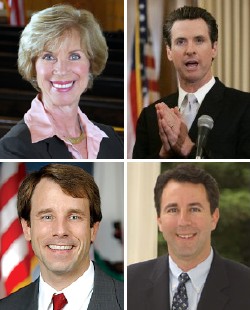 Today, I head down to Los Angeles for the weekend to attend the California Democratic Convention. With Jerry Brown unopposed for the Governor’s race, it should be less exciting than last year’s Convention in Sacramento. But delegates will weigh in on two down-ballot primary fights – Lieutenant Governor and Insurance Commissioner – and a candidate who gets 60% of the vote will have the State Party’s endorsement on June 8th. In the race for Insurance Commissioner, Assemblymembers Dave Jones and Hector de la Torre are duking it out. But the Lieutenant Governor race has generated the most attention. In the past week, I have been barraged with non-stop e-mails and robo-calls from the Gavin Newsom and Janice Hahn campaigns. And the sheer number of dual endorsements in that race has made it hard to follow. Meanwhile, none of the candidates for Attorney General are seeking the Party endorsement – but expect them to be there.

Last year, it was all about the Governor’s Race – where San Francisco Mayor Gavin Newsom had a swarm of campaign workers at the Convention, and Jerry Brown threw a party at the Governor’s Mansion. Los Angeles Mayor Antonio Villaraigosa planned to be there, but had to make a last-minute cancellation (due to the city’s budget crisis.) His spokesperson put on the best face – “we’re not going to Twitter while Rome burns” – but two months later, he was out of the race. And in a very Zen-like quality, Brown managed to scare off all Democratic opponents before entering the race – leaving him unopposed.

Which means this year’s Convention will focus on lower-profile races – where Newsom is now running for Lieutenant Governor, against L.A. City Councilwoman Janice Hahn. Both candidates are vying for the Party Endorsement, and campaigning has been intense. In the past week, delegates have been e-mailed and robo-called repeatedly by both sides – and expect to be courted at the Convention. Newsom will have Party Vice Chair Eric Baumann and former Chair Art Torres working the Hall this weekend, while Hahn has Party Vice Chair Alex Rooker.

Then, we have the incessant robo-calls. The one I got yesterday afternoon pretty much summed it all up for me – from Eric Baumann, on behalf of Newsom. “We’re all sick of robocalls, but …” then he proceeded to explain why delegates should vote for Newsom.

As a San Franciscan, I was intrigued to listen to Newsom’s first robo-call – where among other things, he touted what a great job he’s done as Mayor. By now, we are all used to Newsom taking credit for Tom Ammiano’s universal health care plan – as he did when he ran for Governor. But at least the Mayor can credibly say he supported the legislation, and signed it into law. Here, however, he credited San Francisco for being the first city to pass paid sick days – which the voters approved in 2006 despite Newsom’s opposition.

But while I’ve been barraged with robo-calls from both Lieutenant Governor candidates, I have yet to receive a call from a live person – even from a volunteer. Endorsements at these Conventions are a numbers game, with both sides trying to identify delegates to get 60%. For the Insurance Commissioner race, I got live calls from volunteers in both the Dave Jones and Hector de la Torre campaigns. When I told the Jones campaign they can count on my vote, I got a follow-up letter in the mail thanking me for my support. Lieutenant Governor? Nothing.

Could it be that Gavin Newsom thinks he already has the endorsement sewn up, so he’s not even trying to get commitments from people like me? Or that Hahn needs the Party endorsement more than he does, because he has more money? Newsom’s endorsement list is more impressive than Hahn’s – Nancy Pelosi and Dianne Feinstein, to Speaker John Perez and Senate President Darrell Steinberg. Hahn has SEIU, but among labor Newsom has the California Teachers Association and the California Nurses Association.

Recently, the infamous Garry South – who ran Newsom’s campaign for Governor, but now works for Janice Hahn – wrote a scathing critique of his ex-client, suggesting what many of us have known about Gavin for years: he can be a lazy campaigner. Newsom was quoted on KGO, explaining that his run for Lieutenant Governor won’t interfere in his job as Mayor like running for Governor because he can “do a lot of campaigning on the phone.”

South went for the kill: “In June, Democrats should nominate a candidate for Lieutenant Governor who actually understands the job, wants to do the job, and will actually bust their you-know-what campaigning for the job. Not someone who views it as a consolation prize for his failed bid for Governor, thinks it’s a springboard to higher office – and believes he can phone it in.” But Hahn has yet to prove to me she’s a hard worker.

As for the Insurance Commissioner’s race, both Democrats have vowed not to take funds from the insurance industry. But Dave Jones got my endorsement months ago, because he’s a former legal aid attorney who has been a champion for poor people. He has courted Party delegates for the past year, and his campaign appears well organized.

Finally, with five Democrats running for Attorney General each candidate acknowledges that they won’t get the 60% threshold for an endorsement. But expect them to be there in full force, holding coffees and parties for delegates. San Francisco’s Kamala Harris will be there, plus Assemblymembers Ted Lieu and Alberto Torrico (all three of whom just got triple-endorsed by SEIU.) And L.A. City Attorney Rocky Delgadillo is trying again.

One candidate – Facebook privacy officer Chris Kelly – is running, but has not endeared himself to the netroots. Many are furious at the negative attacks he’s taken on Harris.