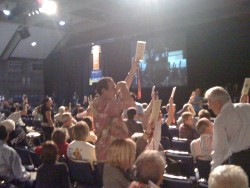 Before the California Democratic Convention ended yesterday, delegates bucked the Party leadership on the May 19th ballot measures – by securing a “no endorsement” on Propositions 1A, 1D and 1E. State legislators and Party operatives pushed “yes” on all six measures, but enough of the grassroots who stayed for the tail end of the session refused to go along. I’ve been attending these Conventions for 12 years, and it’s clear now that activists and “reform” types run the Party – a stark contrast to how it once was. That’s because Howard Dean and Barack Obama brought in a new wave of rank-and-file members, and now we see the impact. College students have replaced the “professional” types that once dominated the Young Democrats caucus. Reformer Hillary Crosby won the race for State Party Controller, and even John Burton’s election as Party Chair is a good thing for the activist wing. Politicians must adapt to this change, and it’s clear some of them – like John Garamendi – still don’t get it. In the race for Governor, San Francisco Mayor Gavin Newsom was not well received at the Convention by delegates from his hometown – as he painted a rosy picture of how things are in the City. And while Chris Daly ran as a “reformer” in the race for Regional Director, other factors contributed his defeat.

Grassroots Buck Establishment on May Propositions

On Friday, the Resolutions Committee (all of whom are appointed by the Chair) approved a “yes” vote on all six Propositions for the May 19th special election – i.e., the budget package sponsored by Governor Schwarzenegger and Democrats in the state legislature. Under the Party’s arcane rules, this would be the default position of California Democrats – unless delegates pulled each Proposition from the consent calendar for a floor vote on Sunday afternoon (when many rank-and-file delegates had left.) If a Proposition was pulled, a 60% vote would be required to uphold the “yes” vote – or the Party would take a neutral position.

In past years, delegates would come to these Conventions to network and hear politicians give speeches. But the new wave of Party activists are different, and they weren’t happy with rubber-stamping these Propositions. On Sunday afternoon, delegates took all six measures to a floor vote. Three of them (Propositions 1B, 1C and 1F) ended up passing the 60% threshold, so the Resolutions Committee was sustained — which means the Party has endorsed them. But delegates blocked an endorsement of Propositions 1A (the budget spending cap), 1D (a raid on children’s health fund) and 1E (divert mental health money), forcing a neutral position. As a delegate who gave a floor speech against Prop 1E, I’m proud it got the lowest level of support among the six measures.

My friend David Dayen at Calitics live-blogged the floor debate on all the Propositions. For a play-by-play account, click here.

“The Party better get us a bigger room next year for our caucus,” bellowed one candidate for President of the California Young Democrats – as hundreds of young people packed into a room at the Convention Center. We all know Barack Obama inspired a whole new generation of young people into politics, but seeing the CYD caucus – and remembering what it was like ten years ago – was an emotional experience. The age cut-off for CYD is 36, and when I was in college it was dominated by political operatives in their early thirties. I used to call it “California Yuppie Democrats.” Today, the vast majority of members are college students – and they have a healthy dose of high school chapters.

Burton and Crosby Elections a Win for Reformers

Two years ago, rank-and-file delegates wanted an audit of the State Party – so grassroots activists could know how the money was being spent. They complained the Party didn’t put resources in red counties – building an infrastructure to be competitive everywhere. The Chair shut them down, so they ran one of their own for Party Controller. Hilary Crosby beat incumbent Eric Bradley by a 54-46 margin, after running a disciplined campaign that tapped into the energy of delegates who cut their teeth with the Howard Dean effort. Crosby wants the Party to raise money from small grass-roots donors, so it will be less dependent on big checks from institutions.

While it’s tempting to view John Burton’s election as Party Chair as a return of the “old guard,” anyone who knows the former State Senator understands it’s a very good thing for progressives. “There’s nothing old-fashioned about helping the poor,” said Burton in his victory speech, as he made it clear that the Party’s activist wing will have a powerful ally. Burton’s nomination was moved by the President of California Young Democrats, and seconded by the head of Take Back Red California – two growing constituencies. It was a signal Burton understands where the Party has to go.

Garamendi Puts Himself Ahead of the Party

Along with East Bay blogger Sean Mykael, I spent a good part of the Convention talking to delegates about how John Garamendi has picked the wrong district to run for Congress – a selfish move that is destructive to the Party. The Lieutenant Governor has injected himself in the 10th District’s special election, when he should be challenging District 3 incumbent Dan Lungren in his native Calaveras County. Bill Durston, who lost to Lungren in 2008 by five points, told me it would make “so much sense” – and others like Charlie Brown (who ran in the 4th District) agreed.

Garamendi has stubbornly told everyone he won’t do it, and even told me there was nothing I could possibly say or do to change his mind. But I sense some insecurity. Rumors abounded Friday night that the “Draft Garamendi” flyers we were passing out was a plot by Mark DeSaulnier – one of the candidates in the 10th District who would benefit from that move. I had to explain it was a just a couple of “angry bloggers” who don’t necessarily have a horse in the race.

Garamendi’s move is offensive because it (a) wastes an opportunity to grow the Party in a red district, and (b) kills the chances of candidates in the 10th District who are “rising stars,” but lack name-recognition. I met one of these candidates this weekend – Anthony Woods, a 28-year-old gay African-American Iraq War veteran. Woods was discharged from the military because of Don’t Ask Don’t Tell, and then got a degree from Harvard’s Kennedy School of Government. He has a compelling story, and deserves a fair shot in the special election.

If the Party was still made up of hacks subservient to a politician’s personal agenda, John Garamendi would get away with this. But with an influx of reformers and activists who don’t take no for an answer, “stay the course” will give him headaches down the road.

When I arrived Friday, Gavin Newsom’s campaign for Governor had an army of college- age kids holding signs at a street corner. I asked if any of them were from San Francisco, and none of them were. I suggested they might not feel that way if they lived there.

Applause in the San Francisco section was light when Newsom gave his Convention speech on Saturday. That’s because you would have no idea just by reading it that the City has a $500 million deficit, the Mayor has offered no specific revenue solutions – and has been largely absent from the City while he’s campaigning.

Newsom presented San Francisco as a solution to the state’s health care woes – without giving credit to Tom Ammiano, and failed to mention the City’s Health Department is getting horrible budget cuts. He also didn’t give Ammiano credit for the Rainy Day Fund that averted layoffs in the City’s public schools. And he touted the City’s “green” record, while our bus system has been starved because it’s an ATM to solve the budgets of other City Departments – up to $80 million.

Why Did Daly Lose to Longo?

In the race for Region 4 Director, Chris Daly branded himself a “reformer” from the Party’s activist wing – but lost badly to incumbent August Longo. Daly partisans argued afterwards that a lot of progressives stayed away – for fear of offending unions who campaigned heavily against him. About 40 out of 140 eligible voters did not cast ballots, and I noticed a few faces who weren’t there. But my guess is it was only a handful – not enough to explain the 77-28 margin.

It’s clear the union angle had a big impact. I had breakfast with two San Francisco delegates yesterday morning, whose politics made me presume they were for Daly. Both of them voted for Longo, and labor was what did it for them. But another factor may have been State Senator Mark Leno. Not only did Leno speak for Longo at the meeting, but he also allegedly made personal phone calls to delegates on his behalf.