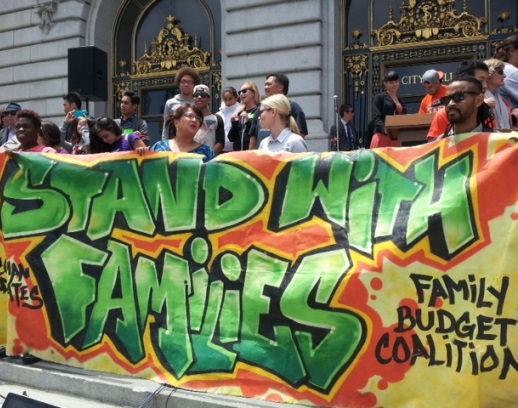 A coalition of youth groups gathered on June 11 with over 100 of their members to rally in support of the Board of Supervisor’s proposed ballot initiative to extend and expand the widely successful Children’s Fund Amendment.

The Children’s Fund, passed by voters in 1991 and renewed in 2000, has served thousands of youth in San Francisco since it was initiated. It has been seen as a great success in providing necessary resources for vital youth services, currently allocating $50 million every year to around 250 groups and organizations and 47,000 youth across the city. Coleman Advocates for Children and Youth, LYRIC, Huckleberry Youth Program, and the Chinese Progressive Association, among others, were present at the rally yesterday.

Chelsea Boliard from Coleman Advocates for Children and Youth, the organization that first launched the campaign for a dedicated fund for youth in 1991, spoke with the over 100 youth across the steps of City Hall with red wagons lining the front steps.

Supervisor John Avalos introduced the ballot initiative in April, and was joined by David Campos, Malia Cohen, Jane Kim, Eric Mar, and Norman Yee on stage to show support for the bill.

“In San Francisco, we take care of our own,” Avalos said. “We look ahead to generations of children, youth, to make sure that this city can provide opportunity, education, housing support services, all kinds of services we need to thrive.”

Avalos noted that preschool and early education were going to be highlighted in this version of the Children’s Fund. It will also have LGBT services specifically mentioned in the charter for the first time, which he said will help increase services for the many queer youth that migrate to San Francisco.

The Children’s Fund came about because of grassroots mobilization in 1991, and the massive presence at the rally was the result of the youth empowerment that has been enabled by the fund.

“It came about not because of politicians cutting deals here at city, but because of a grassroots movement and unity that you built twenty years ago,” Mar told the crowd.

With new reports showing San Francisco having the fastest growing rate of income inequality in the country, Campos spoke of the need for funds like this to exist and remain funded. He also noted that San Francisco has the lowest percentage of children of any major city and how the fund would help keep families in San Francisco.

“This is about San Francisco making a commitment to close this inequality gap,” Campos said. “We need to make sure that everyone is lifted in San Francisco.”

Youth from the many groups present spoke throughout the rally.

Jessica Allen a 24-year-old youth advocate spoke about need for the inclusion of youth and young adults aged 24, and how resources helped her transition into young adulthood.

“All the youth friendly programs ultimately gave me a place of belonging in a place where I didn’t have,” she said. “I was disconnected, and I didn’t have the support I was deserving of.”

EdianBlair Schofield, an 18-year-old queer youth educator at LYRIC, highlighted the significance that youth services had for them, and why the Children’s Fund should be expanded.

“We, youth, are this change to society,” they said. “We can transform this world, this society to a more equitable place.”

“Through LYRIC, I have grown, I have flourished, and I have become triumphant. I have become someone that can transform society for the better. Now it’s time for others to follow my footsteps.”