ACCJC Should be Replaced 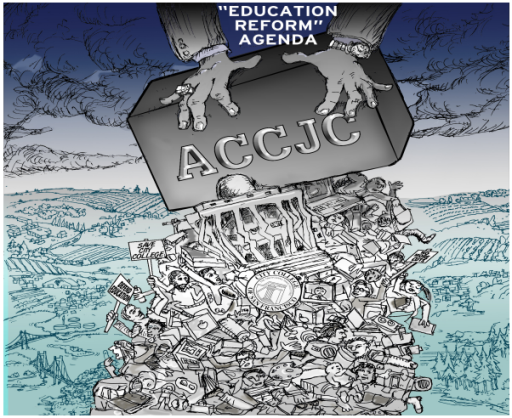 Amidst all the talk about extending the accreditation of City College San Francisco (CCSF), something very important has been insufficiently reported.

Following are a few excerpts from the “Final Analysis and Recommendation for ACCJC” by NACIQI and the Dept. of Education:

* “the Department may be compelled to limit, suspend or terminate ACCJC’s recognition”

* The agency has been unclear in its communications

* The process of appealing an adverse ruling takes too long. “This two step process could take over a year to complete, which does not ensure that the process from commission action to appeal decision is carried out expeditiously”

* “The agency must remedy the noncompliance findings”

ACCJC is Worried and has appealed

The ACCJC appeal is not widely known and they have not publicized it. They undoubtedly realize that if this issue is discussed in the open, ACCJC will surely lose the appeal. In the past, ACCJC could at least count on the loyal or submissive support from college administrators whom they serve and come from. Now, even the leaders of California Community Colleges are voicing discontent with ACCJC. In a break with tradition they have sent a letter pressing for a change in ACCJC actions, specifically regarding CCSF.

At this time it is unclear when the Dept. of Education will makes its determination on the ACCJC appeal. There are many more complaints against ACCJC on record now, compared with in December, but they will not be considered in the appeal.

The Accreditation Commission has distorted the truth in many areas. For example, ACCJC’s reports to the public and to the press make no mention of the fact they have been found out of compliance regarding a basic eligibility requirement. They tried to spin the rulings from December into a victory despite the crushing criticism. The ACCJC description of the December hearings and results is basically untruthful.

More recently ACCJC spokesman David Hyams was publicly lying when he claimed that nobody has questioned the validity of ACCJC findings regarding CCSF compliance. He said

The above statement is, of course, nonsense.   Not only did many people question the findings and criticize the accreditor from the start, the teacher’s union filed a formal complaint which was substantially agreed with by the Dept. of Education.

It is one of the tragedies of this situation that CCSF did not publicly question the initial “Show Cause” ruling, partly because Chancellor Griffin had recently departed abruptly for brain tumor surgery. When the “Show Cause” ruling came down, it was the Shock Doctrine in practice. The Board of Trustees thought the best course was to find someone friendly with ACCJC so they appointed outside interim chancellors with no knowledge of nor commitment to CCSF. This was followed by the appointment of a Special Trustee who was ACCJC devotee and who publicly admitted he knew nothing of CCSF’s deep connections in the community. When the ACCJC spokesman says ‘No one complained’, this is whom he is referring to, along with the State Chancellor who is himself a former ACCJC Commissioner. In contrast, many informed people were questioning and complaining from the start. Even the former Chancellor of the Community College System, Jack Scott, questioned the extremity of ACCJC decisions.

ACCJC is Trying to Reverse Course

The teacher’s union complaints against ACCJC were largely upheld by the Dept. of Education. As a result, ACCJC has been required to make changes in composition of review teams, prevention of conflict of interest, and clarity of communication. At this point the Dept. of Education has accepted that ACCJC has started making the necessary changes but time is needed to verify.

However in the huge area of their policies and actions being “widely accepted” in the education community, there were found out of compliance. As a result, ACCJC is trying to rapidly reverse course.

The following chart shows the percentage of explicit sanctions on colleges being comprehensively reviewed over the past eight years. Notice the dramatic change in sanctions at the last meeting (January 2014) which took place AFTER the Dept. of Education put ACCJC on effective “show cause”.

One could argue that January 2014 was an aberration and that ACCJC “standards” are consistent and the dramatic decline is because colleges have suddenly learned how to comply with “standards”.   But honestly, doesn’t that stretch credulity?   In addition to the abnormally LOW number of explicit sanctions on colleges being reviewed comprehensively, there was a dramatic reversal and dropping of sanctions on other colleges previously under sanction:

*   Four colleges were “Removed from Warning”

* Three colleges were “Removed from probation”

* Another college had its severe Show Cause sanction removed entirely.

In short, the January 2014 meeting of the ACCJC resulted in a dramatic change in their behavior. They went from sanctioning roughly 50% of the colleges they were comprehensively reviewing to sanctioning only one of nine. On top of that, they REMOVED the previous sanctions on nearly every college which has been under sanction.

Since ACCJC is now under scrutiny and in clear danger of losing its authorization, suddenly it is dramatically changing its behavior. This is another example of the fact that sanctions have been applied subjectively and the 2012 and 2013 rulings against CCSF, made when ACCJC was operating out of compliance with federal regulations, should be set aside.

ACCJC Should be Replaced

ACCJC has justified its severe punishment of CCSF on the grounds that the Dept. of Education requires accreditors to not give indefinite leeway to colleges which are not meeting standards. It’s called the “two year rule”.

The problem for ACCJC arose years ago because they have been using the punitive sanctions so loosely and excessively that it caught the attention of the Dept. of Education. No other accreditor in the country has applied negative sanctions, implying colleges are out of compliance with standards, as pervasively as ACCJC.

This brings us back to the question of City College San Francisco. There are two important facts:

1) The Dept. of Education determined that the review of CCSF in 2012 was out of compliance with regulations. It is clear that ACCJC’s “Show Cause” decision should have been dismissed with a new evaluation in keeping with federal requirements. But ACCJC has prevented that from happening.

2) ACCJC justifies its “Termination” ruling against CCSF because of the “two year rule”. However a recent detailed study of relations between ACCJC and CCSF confirms that CCSF was NOT out of compliance with ACCJC standards before 2012, as ACCJC has falsely asserted.

It’s way past time for ACCJC to be held accountable. They have caused far too much damage and expense. Their actions have directly led to thousands of students dropping out.   ACCJC needs to be replaced.