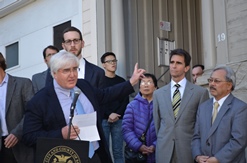 In a remarkable showing of tech support for those victimized by speculator evictions under the state Ellis Act, nearly 75 companies have gone public with their support for SB 1439. The sign on letter comes as the bill faces its next big test at the Senate Judiciary Committee on May 6.

The letter, signed by SF.citi head Ron Conway, makes all of the key points supporting the legislation, which is also sponsored by Assemblymembers Phil Ting and Tom Ammiano. Here is the letter: