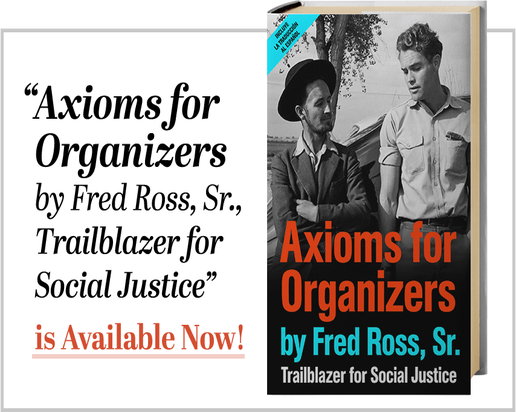 “A good organizer is a social arsonist who goes around setting people on ﬁre.”

“90 percent of organizing is follow-up.”

“If you are able to achieve anything big in life it’s because you paid attention to the ‘little’ things.”

These are just three of Fred Ross Sr.’s Axioms for Organizers. Ross was probably the most influential (but little-known) community organizer in American history.  Although Ross died 22 years ago, his influence continues in the thousands of people whom he taught the tools of organizing and in the ideas found in this powerful little book, Axioms for Organizers, which has just been republished as an e-book in English and Spanish.  In my article,“A Book for the People of Ferguson — And Oppressed People Everywhere,”   I celebrate Ross’ life and legacy.

The book, launched last week,  is available for $2.50 through all major e-book sellers. Ross’ son, Fred Ross, Jr.—also a seasoned and successful organizer—added a chapter to the e-book called “Organizing in the Internet Age,” and included a short biography of his father, as well as a thoughtful introduction by former Secretary of Labor Robert Reich, who is now a professor at University of California-Berkeley.

Those who’ve heard of Ross typically associate him with Cesar Chavez, the legendary founder of the United Farm Workers union. It was Ross who first identified, recruited and trained Chavez to become a leader and an activist. “Fred became sort of my hero,” Chavez recalled. “I saw him organize, and I wanted to learn.” But that was only one episode in Ross’s long career as a professional troublemaker.

As I explain in my article, Ross dedicated his life to fighting racism, discrimination, and other injustices by organizing working men and women to help themselves by building powerful grassroots organizations.  He had a successful career mobilizing people to challenge police brutality, fight segregation, and organize voter registration and voter turnout campaigns. Ross taught people how to channel their anger and frustrations into building powerful grassroots organizations that can win concrete victories that change institutions and improve people’s lives. He understood that while sporadic protests can draw attentions to long-neglected problems, it requires the hard day-to-day intentional work of organizing to build power and give people a real voice in the key decisions that shape their living and working conditions