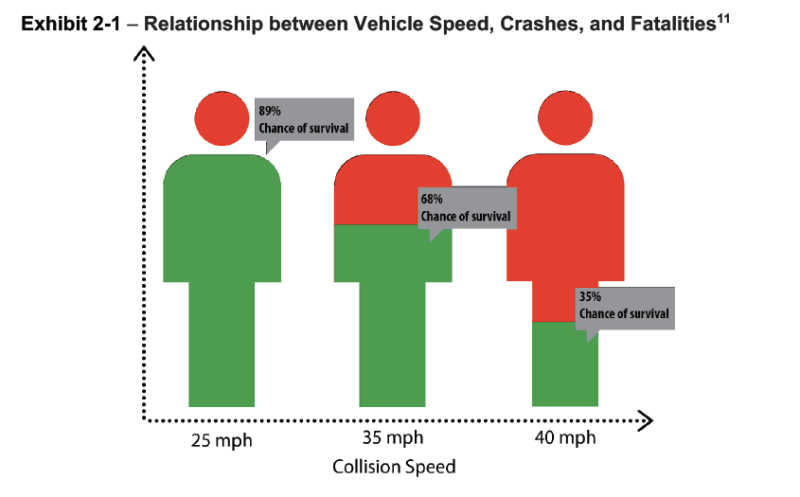 From the Zero Fatalities Task Force report: The faster a vehicle is going when it crashes, the more likely a serious injury or fatality will occur

At long last, the highly anticipated Zero Fatalities Task Force report has been released. Its conclusion: California needs to change the way it sets and regulates speed limits on its streets.

While that was the original, immediate intent of the bill, A.B. 2363, that led to this report, opposition from various sources clouded the issue. The bill was ultimately whittled down to calling for this task force to study the issue of speed and safety, incorporating input from as wide a variety of stakeholders as possible, and to come up with recommendations for moving forward.

“It’s okay,” A.B. 2363 author Assemblymember Laura Friedman told Streetsblog. “Sometimes you have to take a step back. I am most encouraged by the fact that even with a wide range of perspectives…. and even though they didn’t agree on everything, they did come to a broad consensus.”

“And given that, now we’ll be able to move forward to codify some of their recommendations.”

As a matter of fact, taking the time to study the issue closely has produced even better recommendations than the original bill was able to tackle. “Quite frankly, as a result we’re going to have legislation that has more traffic safety-related regulations than the [original] bill had,” said Friedman. “And it will also be farther reaching in other areas as well.”

The Zero Fatalities Task Force report [PDF], backed by research from a team that included input from UC Berkeley, UCLA, and UC Davis [PDF], sets out a number of findings. For example, speed is a factor in the safety outcomes of crashes. Believe it or not, some “stakeholders” in the process have objected that speed has limited significance. But, no: “There is clear evidence, supported by statistical analyses, that traffic fatalities and serious injuries increase with individual vehicle speed,” according to this, and many other, reports.

The report provides a solid explanation of California’s current speed-limit-setting methodology, which was developed for rural roads and relies on smart choices by 85 percent of drivers. That is, a speed limit is set after studying how fast people drive on a given segment of road and then adjusting it to the speed driven by 85 percent of those drivers. It assumes that “most drivers will drive at a safe and reasonable speed based on the road conditions,” says the report. “It is also based on the idea that speed limits are safest when they conform to the natural speed driven by most drivers and that uniform vehicle speeds increase safety and reduce the risks for crashes.”

In addition, the “85th percentile method,” developed and used exclusively in the U.S., “relies on driver behavior,” and is likened by the research team to “crowd-sourcing speed limits.” “Although historical research between safety and speed asserted that posting the speed limit at the 85th percentile speed resulted in the lowest crash rate, recent studies indicate that there is not strong evidence to support this claim,” says the report.

Among the problems that have arisen with this method are “speed creep,” in which speed limits go up over time as limits are raised, people drive faster, and then limits are raised again. This is not academic–Los Angeles had to raise speed limits on a number of its streets a few years ago when it was forced to update its traffic survey so the LAPD could enforce existing limits. The survey revealed that enough drivers were exceeding the limit that they then had to raise it, without being able to consider road conditions or design or the safety of other users.

Cities are grappling with the myriad safety and livability problems caused by their historical focus on vehicle throughput at the cost of all other users. In so doing, they are also realizing how hampered they are by outdated rules like the 85th percentile method. Even if local officials want to propose lower speed limits in urban areas, they “may be unable to do so because state transportation departments require engineering studies that are driven by the 85th percentile speed.”

“The automobile has irrefutably altered the way in which transportation systems and the built environment are designed and constructed, often at the expense of pedestrians,” says the report, quoting from an FHWA study.

“I was frustrated when, as a city councilmember, I was told something was ‘not possible’ because it said so in a manual somewhere,” said Friedman.

The report recommends allowing cities more flexibility in setting speed limits, as some other states do. That includes allowing them to keep current speed limits even if a survey shows that 85 percent of drivers are exceeding the limit, and creating more classes of locations where speed limits can be set at a particular speed without having to do a traffic survey (for example, near schools and in business districts).

It also recommends developing a way to conduct traffic speed surveys that takes into account bike and pedestrian safety.

Some people, including a few task force members, have argued that speed limits themselves have very little effect on safety, but the researchers found the opposite. “Recent research has indicated that this approach is effective,” according to the report. “The UC ITS … synthesis found that research studies clearly indicate speed limit changes cause changes in drivers’ speed. Those changes might be small, but even small changes in speed limits can bring significant safety benefits.”

This is especially true for road users not in vehicles. The research team found that “even though reducing speed limits may only have a small effect on vehicle speeds, those changes in speed result in meaningful safety improvements,” particularly for vulnerable road users such as bicyclists and pedestrians. And “national research results…support the notion, which is advocated by many California cities and local governments, that lowering speed limits will make streets safer.”

On the other hand,

Task Force members overwhelmingly agree that changing a road’s infrastructure is the most important factor to reduce vehicle operating speeds. When surveyed, 13 of 15 survey respondents said that design elements effectively reduce speeds. One Task Force member noted that a local city had recently reduced the speed limit in school zones. However, the accompanying wide streets encouraged drivers to ignore the signs and continue driving fast; the lowered speed limit was in itself “not enough to make our streets truly safe.”

The report recommends that the state create guidance to give city planners a better idea of the options they have to increase safety. This includes inserting information about engineering and design interventions into the California Highway Design Manual, such as the notion of “target speed” (designing a street in a way that encourages driving at a particular safe speed).

The task force report also recommends the long-term development of a replacement for the 85th percentile method, specifically context-sensitive methods that prioritize the safety of all road users. “This approach should be based on how a street is used and by whom, how protected nonmotorized users are from vehicles, how likely it is that there will be a conflict between vehicles and other street users, and how likely it is that a collision will result in a fatal or serious injury.”

“We need to do something differently,” said Assemblymember Friedman. “Hopefully this report will finally give the legislature an incentive to change the way we set speed limits going forward.”

She is in discussions with staff and other legislators on upcoming legislation. “We’re still going through the report, but we will be introducing bills soon,” she said. They have to decide which issues to tackle first, and whether to put them together in a single bill or spread them out.

“We’re looking for parts that have the most direct impact on traffic safety, namely pedestrian and bike safety,” she said. “This report provides a good groundwork for that. But whatever it is, it will be a work in progress. We’ll be making changes based on what we hear from the transportation committees, for example.”

At any rate, expect to hear more about this report in the next few weeks, as hearings on new legislation stemming from its recommendations are set.