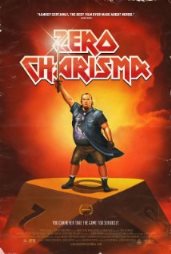 In the Dungeons and Dragons role-playing game (RPG hereafter), every character possesses a grab-bag of personality traits known as charisma. These traits include a character’s actual strength of personality (as opposed to other characters’ perception of same), persuasiveness, personal magnetism, ability to lead, and physical attractiveness. For purposes of game play, a number from 1 to 20 is randomly assigned to a character’s charisma courtesy of a throw of a die. One, of course, represents lowest charisma. For those masochistic enough to wonder what a person with zero charisma is like, filmmakers Katie Graham and Andrew Matthews answer this question with their SXSW Audience Award winning black comedy “Zero Charisma.”

Scott Weidemeyer (Sam Eidson) lives with his incredibly acerbic grandmother and makes do as a take-out restaurant’s delivery boy. Tuesday evenings provide his main source for outside social interaction. Those nights Scott becomes the all-powerful tyrannical Dungeon Master of his self-created RPG. When a divorce threat removes one of Scott’s players from the game, the Dungeon Master’s efforts to find a replacement come at first to naught thanks to his obnoxious aggressiveness. Chance brings semi-geeky Miles Butler (Garrett Graham) into the group’s fold. What Scott doesn’t expect is seeing Miles win over the other players in the RPG through his niceness, funniness, and all-round coolness. Young Weidemeyer’s carelessly built life starts collapsing around him, and he seeks revenge against Miles for somehow totally upending his life.

Scott embodies the nerd social loser trifecta. He’s spectacularly overweight, is a single adult man living with an older parent, and lacks a social life outside his fandom. No backstory is given to Scott’s Tuesday night RPG buddies, but it’s probable their lives aren’t much better.

What worsens Scott’s situation is that he’s a man-child with severe anger management issues. His frustration with his pathetic life gets expressed in both the holes he punches in his room’s walls and such petty passive-aggressive actions as tightly sealing a mayonnaise jar. Heavy metal music provides a sonic outlet for his semi-suppressed aggression.

“Zero Charisma”’s script does provide viewers with an understanding of why Scott embraced fantasy entertainment in various forms so avidly. Grandmother Wanda (Anne Gee Byrd) possesses a particularly acidic tongue she shows little hesitation in using. Mother Barbara (Cyndi Williams) turns out to be a flighty narcissist who regards family as merely a resource to exploit. The scriptwriters get credit for not needing to spell out how fantasy and science fiction became young Scott’s emotional refuge.

Miles earns Scott’s eventual enmity because the Games Master feels the Geek Chic founder’s lifestyle threatens the rationale for Scott’s personal hideout. Butler’s mentioning his personally talking to the Wachowskis and showing of his own comics work establishes his geek credentials. The new member of Scott’s RPG group makes friends without being domineering or aggressive. Miles’ girlfriend Kendra is accepting and supportive of his interest in fantastic pop culture. Scott thinks of Miles as a scapegoat for the personal disappointments of his life.

Yet the other gamers and fans seen in “Zero Charisma” differ from Scott in degree of nerdiness. An aspiring game creator who asks a gaming legend for career advice seems more interested in seeking public ego-stroking than professional critiquing. When Scott’s RPG group visits Miles’ home, the members are more interested in admiring Miles’ comics work than finding ways to engage Kendra in the conversation. Even Scott treats his sitting next to the attractive woman as a type of punishment.

Graham and Matthews’ film demonstrates obvious familiarity with the shortcomings of nerd culture. There have been male fans that have masturbated in various ways to images of Wonder Woman. Other unsuccessful fans have voiced with different details Scott’s unfounded claim that a story he submitted to a no-name writing contest years ago got allegedly “stolen” to be the hit science fiction film “The Matrix.” Having these real-life nerdish embarrassments dramatized on the big screen breeds not admiration but cringing and hoping one’s own mistakes as a fan didn’t catch Graham and Matthews’ eye.

Potential viewers need not worry that “Zero Charisma” is the nerd equivalent of insider baseball. The film’s specific science fiction and fantasy references are to already familiar mass culture touchstones such as the Millennium Falcon and the Starship Enterprise. Graham and Matthews are ultimately telling the familiar story of the self-proclaimed big fish in a small pond being rudely made aware of his pond’s minuteness.

“Zero Charisma” also can’t be dismissed as a hatchet job on nerd culture. Pointing out a culture’s failings is not necessarily equivalent to hating that culture. If it were, why does the moment when Scott delivers his monologue about the place of imaginary role-playing in humanity’s long history of storytelling feel so true? Eidson’s performance as the anti-heroic Scott makes plausible that the person who delivers this idealistic speech is the same person who also acts as an obnoxious self-appointed gatekeeper over fellow nerds.

The film’s script does boast some nicely ironic one-liners, such as Scott’s pompous “I deal in reality. Let’s role-play.” But awareness that a character is a stereotype (e.g. Angry Chinese Woman) doesn’t make the script’s use of that same stereotype less offensive.

Overall, “Zero Charisma” feels more like a cinematic gleaning of embarrassing nerd behavior than something that uses those self-humiliating moments to create something surprising and truly cringeworthy. For a work that successfully accomplishes this feat, the reader is directed to cartoonist Evan Dorkin’s tales of the “exploits” of the Eltingville Club. The boys in those stories do such insane things as take amphetamines to watch all of a “Twilight Zone” TV marathon or duel over their knowledge of “Star Wars” minutiae.