Your Meeting Is in a Boycotted Hotel. Now What? 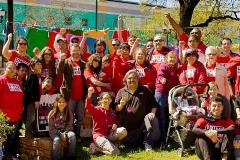 In May of last year I answered my phone, at work in Seattle, and found myself talking to a union organizer in Texas.

He was calling to alert me that my professional association, the Society for Social Work and Research (SSWR), was scheduled to have its 2014 national convention at the San Antonio Grand Hyatt—a hotel on the UNITE HERE boycott list.

Working conditions for San Antonio Hyatt workers are among the worst in the country, with housekeepers expected to clean rooms in eight minutes or less, or up to 30 rooms per shift. The boycott is aimed at getting Hyatt to agree to a fair process for workers to form a union, free from management intimidation.

But the meeting was only eight months away. The train had not only left the station, it was barreling along at top speed. Was there any way to stop it?

Much to my amazement, there was, and we did.

It began with a few people each working independently, far apart and invisible to each other, feeling alone. There wasn’t time to plan a campaign, and only in retrospect does this look like a process. I share it here in hopes it can be of use to others in similar situations: wanting to keep their organization from crossing a virtual union picket line at a non-union hotel.

The members of the Society for Social Work and Research are primarily social work faculty and doctoral students. What worked in this group was simultaneous pressure at two levels: from organizational leaders who differed with the board’s decision and from grassroots activists.

Ultimately, a decision to move the meeting venue would have to come from SSWR’s elected board. The majority of board members were reluctant to consider moving, and the initial vote to stay at the Hyatt was unanimous.

But several current and past leaders of the organization were sympathetic to the boycott. Identifying and working with these leaders was key, because their insider knowledge and demonstrated commitment to the organization made their voices un-ignorable. They put in many hours of careful negotiating and lobbying.

These activists were less focused on the practicalities of relocating the conference, and more focused on the ethical problem of defying the boycott. The first steps were conversations and meetings of allies. These led to increasing numbers of individual messages of concern sent to the board via email.

Soon members and universities began booking rooms at other San Antonio hotels to hold their students’ job interviews. Students even began brainstorming ways to raise funds for SSWR to make up for the penalty fees it might incur by breaking its contract with the boycotted hotel.

In September a Change.org petition went online; it quickly garnered over a thousand signatures. Students at my university created a Facebook page, Social Workers Stand Up, that was used to send links to the petition far and wide. This outpouring of passion, largely from the youngest and most idealistic in our profession, helped keep supporters energized.

If you’re facing this situation and wondering where to start, here are some steps:

1: Get the facts. When UNITE-HERE began to lobby social work faculty, the SSWR board sent out a message to members explaining that the board could not end its contract with Hyatt because it would cost almost a half million dollars to break it, which would bankrupt the organization.

Was this dire assessment of costs accurate? I talked with UNITE-HERE staff, read the Hyatt Hurts website, and asked my labor friends if these threats were credible (they were) and whether the contract was as unbreakable as it sounded (it wasn’t).

In the summer, when UNITE HERE called off its global Hyatt boycott, the board sent a message that suggested that the San Antonio boycott was off (it wasn’t). Having a clear and accurate understanding of the facts was essential to effectiveness on the next point:

2: Talk about it. I took every opportunity to chat up my co-workers, especially those I thought might be sympathetic. My troublemaker credentials came in handy here, as some colleagues sought me out for my thoughts.

We took pains to avoid blaming and shaming in these conversations, keeping the focus on “us vs. Hyatt management” rather than “members vs. the board” or “boycotters vs. attenders.” The group’s annual meeting is an important job search and networking venue for graduating students, as well as for faculty researchers, so even those in sympathy with the union’s position were often torn between desire to support the boycott and needing to meet other personal goals. Alienating them wouldn’t have helped us move the board, or other members.

3: Focus on practical as well as ethical problems. In their initial thinking, members of the board (which has a legal obligation to shepherd the organization’s budget) focused on the immediate financial penalties for breaking the contract.

The costs associated with holding the meeting at a boycotted hotel were less obvious, so it was imperative to bring these concerns front and center. Members queasy about the boycott might choose to “sit out” this year’s meeting. The loss of their registration fees would be significant.

Some would come but not stay at the Hyatt, so room quotas would not be met. Those who felt strongly about the ethics of holding the conference in a boycotted hotel might leave the organization altogether, causing a loss in membership dues.

4: Do it even if you think you’ll lose. I didn’t really expect we would win. But win or lose, the campaign offered an opportunity to raise important issues and build for long-term change in the organization.

This fight became a venue for talking about how support for unions meshes with social work values and about how we “walk the talk” (or don’t). It was a chance to educate about labor perspectives. As a result, at our school we’re having a series of events this May to talk about social work’s relationship to labor and workers—hospitality industries, immigrant workers, the $15 Now campaign to raise Seattle’s minimum wage, and other labor topics.

The incoming president of SSWR is working to craft strong criteria for selecting future meeting sites, criteria that address labor, environmental, and other human rights issues.

In the end, SSWR never officially boycotted the Hyatt, but the board found a way to negotiate reduced financial penalties for holding all the sessions at other hotels and at the convention center. With all sessions moved out of the Grand Hyatt, members were able to attend the meetings and honor the boycott.

A high point for me was getting to meet some of the Grand Hyatt workers in person, to share joy and congratulations about a fight well fought.