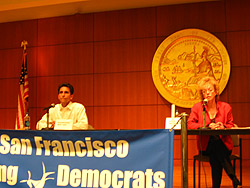 State Senator Carole Migden and Assemblyman Mark Leno squared off last night in the very first debate for the 2008 State Senate race, at a meeting of the San Francisco Young Democrats. Moderated by John Scott of Quake Radio, the one-hour exchange revealed a clear difference in the candidates’ priorities, tactics and temperament.

After the debate, SFYD members voted on whether to make an early endorsement in the race. Out of 66 votes cast, Leno won the endorsement with more than 60% of the vote – a large boost for his challenge to the incumbent. The debate and endorsement also helped the club’s clout in local politics, as members reported getting 30-minute phone calls from Carole Migden in the run-up to last night’s vote.

“Tonight is a night about tough choices,” said Luke Klipp, the Club’s President. “We have two incredible people, and it requires a close scrutiny of both candidates. SFYD is honored to host the first debate.”

While Leno touted his long relationship with Young Democrats and presence in the district, Migden stressed the hard work that she does in Sacramento. While Leno urged the need to have competitive elections to invigorate the grassroots, Migden argued that resources should not be wasted on local battles. While Leno stressed the need to push the envelope on progressive issues, Migden said that it’s better to focus on tangible results. In the end, Leno’s message prevailed.

Leno began his opening remarks by thanking SFYD for endorsing him when he ran for the Assembly in 2002, and how he has always been there to meet young activists and work on progressive issues. “I know we have the same mission,” he said. “To challenge the status quo and fight for change. I am the best choice for change.”

Migden began with a frank statement – “I am the status quo.” The State Senator candidly acknowledged that she had not built a relationship with local activists, but that she has worked hard to deliver for the district. “Five of my bills have become national landmarks,” she said, as she rattled off her various accomplishments like predatory lending, needle exchange and saving the Headwaters Forest.

“It’s terribly important to send folks with the heft and continuity to bring things home,” said Migden, as she defended the fact that most in the room do not know her as well as Mark Leno. “I know that sometimes I’m in the Capitol chomping on cigars and getting things done – rather than being here.”

Migden argued that she has done a good job in Sacramento, and spent much of the debate questioning the wisdom of challenging an incumbent who you generally agree with on policy issues. “Mark has the right to run,” she said, “but is it a good idea? We should put our energy into places where we can make gains.”

But Leno said that the “diverting resources” argument is a very limited way to view politics. “Given that we live in one-party districts,” he said, “there is absolutely no democracy without primary challenges. When we let voters experience democracy, we actually bring more people into the process. These seats don’t belong to those who were elected – they belong to the voters who put us there.”

While the debate focused on how much time legislators should spend in San Francisco and the wisdom of a primary challenge, there was also a substantive discussion on the issues. And it’s here where their tactics showed a stark contrast. While Leno is clearly the big-picture idealist, Migden portrays herself as a hard-nosed pragmatist.

On mass transit, Leno advocated a new fund for Muni by allowing San Franciscans to voluntarily re-instate the car tax that Schwarzenegger repealed. On tenants’ rights, he talked about curbing the Ellis Act. On gay rights, Leno trumpeted his work on marriage equality that has helped “raise consciousness and change hearts and minds.”

Migden said that she agreed with all of these proposals and that it was worthy to push for them, but that the Governor has – and will – veto them, leaving few tangible accomplishments at the end of the day. She argued instead that getting things done in Sacramento means bringing home the bacon. “When Gavin Newsom wants to get stuff done for the City,” she said, “he comes to me.”

Ultimately, however, Migden was left with the unenviable task of trying to explain to a group of young activists why – despite 35 years in politics – most do not know her very well. “If you can’t vote for me,” she said, “then don’t endorse – it’s still early. Give me the chance to build a relationship.”

But Leno said that he had already built that relationship. “I get my work done in Sacramento,” he said, “but I also take the extra step to come home. It’s election time, and guess who shows up? The politician who wants your endorsement.” Leno’s track record of having shown up for Young Democrats regardless of any election posed a sharp contrast with Migden – who seemed frustrated that she has to fight to defend her seat.

In the end, the membership of SFYD agreed with Leno and gave his campaign the necessary 60% for an endorsement – even though the election is 14 months away. Leno credited his years of building a relationship with the City’s young activists, and said that he was proud and honored to receive their support. “Having this endorsement at the time gives me the steam that my challenge to the incumbent will need,” he said.

EDITOR’S NOTE: Outside of work, Paul Hogarth is a member of San Francisco Young Democrats and has endorsed Mark Leno for State Senate. He also made the motion for SFYD to make an early endorsement that prompted last night’s vote. He did this as an independent member of the Club, and plays no advisory role in the campaign. Send feedback to paul@beyondchron.org