York Pork is Too Easy a Target in Olympics Finger-Pointing 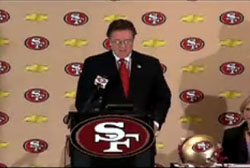 No observer of the dysfunctional San Francisco 49ers organization should have been surprised when owner John York bungled the protocol for his announcement that the team would be moving to Santa Clara. (The shakiness and lack of consultation of that assertion have been well documented, and its implications for the real needs of the city were examined in Beyond Chron yesterday.) However, one aspect of the punditry surrounding this latest manifestation of bozomania, York style, strikes me as overdone. That is the suggestion that San Francisco was poised to win the 2016 Summer Olympics – or at least was the clear frontrunner for the American submission at the next vote of the International Olympic Committee.

Such speculation has the virtue of providing downfield blocking for Mayor Gavin Newsom, who does deserve credit rather than blame for holding the line against excessive private demands on the city’s treasury and land. But simply scapegoating York is a cheesy gloss on a larger issue.

That San Francisco coulda been an Olympics contender, before giving up the ghost yesterday, is indisputable. But a lock? No way. Major cities across the country and around the world claw for the fumble at the bottom of the Olympics pile. No matter how many millions you throw at it, no matter how meticulously you plan it, the only way to turn a flirtation into a sure thing is the Salt Lake City way – by spreading around all the right bribes to all the right chaperones just before the bar closes.

Look, as a freelance writer I don’t know the difference between eminent domain and a domain name. On the other hand, I’m the world’s foremost authority on rejection. When people say “no,” they grope for the most convenient and generic reason for doing so, but that doesn’t make it the most truthful or sincere one. In the real world, a viable San Francisco Olympics bid had many more hurdles to surmount after satisfying the demands of York Pork.

Just for starters, the Candlestick Point location truly stinks. It always has. The only way an “infrastructure” development package could ever be passed by voters was through the machinations of former Mayor Willie Brown. And by some accounts Brown stole that 1997 vote more blatantly than the Bushies did Florida in 2000 or Ohio in 2004. That mouthpieces for the city’s Olympic steering committee would so compulsively latch onto the York hangup as the single, global explanation for the collapse of their efforts is an understandable human reaction, but it doesn’t speak well for the maturity of their original vision.

Meanwhile, it may be wishful thinking on the part of those of us who would like to restore sanity to the relationship between sports and municipalities, but there are signs that the national stadium shakedown racket is approaching a tipping point. In last week’s elections, voters in Sacramento, a recent initiate to the ranks of major sports markets, rejected a public funding scheme for a new home for the basketball Kings, their only current entry in the field.

Even more telling was the Seattle voters’ thumbs-down of more palatial digs for another NBA team, the SuperSonics, who could be Oklahoma City-bound as a result. In the Pacific Northwest, Microsoft wealth is relatively widely distributed; if the good people there are willing to force an honest discussion about civic priorities, then that debate may be not just petulant, but ripe.

Personally, I’m agnostic about the (ever remote) prospect of seeing San Francisco host the Olympics. Without a doubt, there might be some economic trickledown, though I’m sure the supporting models are wind-aided exaggerations. I wouldn’t relish all the hassles attendant to a made-for-TV production – most notably becoming a magnet for terrorism. The best thing I can say is that it might facilitate my wife’s dream of a season-long house swap in Barcelona or, better yet, the cash returns from subletting our Berkeley townhouse rental.

But, people, let’s keep in perspective the meaning of this latest shot in the foot by San Francisco’s all-purpose total-yardage bete noire, John York. As Forrest Gump would have put it, “Bozo is as bozo does.”

Irvin Muchnick is author of Wrestling Babylon: Piledriving Tales of Drugs, Sex, Death, and Scandal, which will be published early next year by ECW Press. For more information, see http://wrestlingbabylon.com.