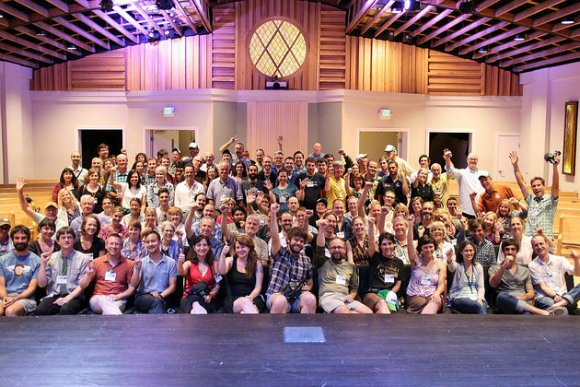 I have bad news for those who oppose new housing, support suburban sprawl, enjoy subjecting working people to long commutes, and who think preserving gas stations is more important than allowing kids to grow up in vibrant cities: YIMBY’s  from across the country are gathering in Oakland this week. They will all be at the YIMBY Conference 2017, sponsored by East Bay Forward .

This will likely be the largest gathering of urban visionaries anywhere in the country this year. Tickets for the July 13-16 event are only $75 a day on a sliding scale, and nobody will be turned away for lack of funds.

Who Are the YIMBY’s?

YIMBY—an acronym for Yes In My Back Yard—is the name adopted by many pro-economic diversity, pro-transit, pro-infill housing, pro-smart growth, anti-greeenhouse gas emission activists from across the land. It is a takeoff on the term NIMBY—Not in My Back Yard—which I avoid as it oversimplifies the agenda of anti-housing activists and ignores their 1970’s progressive roots.

YIMBY’s bring a global environmental perspective to the fight for more housing. They also realize there is nothing “progressive” about denying working and middle-class families the opportunity to live in big cities.

Despite YIMBY’s environmental and social justice agenda, anti-housing activists falsely accuse them of  being on the political right. I wrote a lengthy piece exposing these false claims— “Anti-Housing Activists Fake Narratives,” May 16, 2017—but they continue to be made.

The most common charge against YIMBY’s—claims they are “shills” for developers—reeks of hypocrisy. If you want to see who gets money from developers and banks, check out the dinner committees for nonprofit housing groups’ annual fundraising events.

Banks and developers routinely buy tables at these events, some of whom are for groups  attacking YIMBY’s for aligning with builders of new housing. I look forward to these groups turning away future developer funding. They should also return the hundreds of thousands of dollars they have previously received so their attacks on YIMBY’s can be consistent with their own practices.

Developers fund all types of nonprofit groups. Yet it is only when pro-housing advocates align with those building the housing all cities desperately need that taking money from developers becomes suspect.

It’s no mystery why opponents of new market rate housing attack those who build these units and their YIMBY supporters. By focusing on “evil developers,” these activists hope people ignore how opposition to infill housing promotes urban inequality and climate change.

Not to mention promoting increased property values for homeowners benefiting from artificially reducing the housing supply. That’s a part of the anti-housing agenda  rarely discussed.

I’ve talked to YIMBY’s from around the country. They have a much bigger social vision than anti-housing opponents.

Opponents of housing in Bay Area cities like Marin, San Francisco and Berkeley only see what is happening in their block, neighborhood or city. They do not care that population in the area is rising and that people have to live somewhere to get to their Bay Area jobs.

Multi-hour, greenhouse-gas emission producing commutes on the Bay Bridge? Not their problem.  Public school teachers’ inability to afford the cities where they teach? That’s the government’s fault. Or the workers’ own fault for not teaching in a district where they can afford to live.

These anti-housing activists live with blinders on. They have no vision of the environmental or social consequences of restricting housing in their neighborhoods or city.

That’s why so many have such a visceral anger toward YIMBY’s. YIMBY’s are calling housing opponents out for their narrow vision. They are calling out groups like the San Francisco Bay Area chapter of the Sierra Club for demanding an EIR for an infill housing project on an auto repair site. Nobody likes to be exposed as an environmental or social justice hypocrite, but YIMBY’s must do so on a regular basis.

Talk to most YIMBY’s and you will learn that they see themselves on the political left. Some activists are libertarians who support more housing as part of a free-market approach. But opponents’ pattern of selecting isolated quotes from such activists to “prove” they are anti-poor or anti-tenant is like discrediting anti-housing groups for members who use “neighborhood preservation” to keep out the poor and non-whites.

I strongly encourage anyone interested in learning what the growing YIMBY movement is really about to attend the conference. It should be a must attend for anyone who cares about the future of  Berkeley and San Francisco, which are already paying a steep price for not building enough housing for decades.

The conference is also a must attend for those who care about stopping climate change and reducing greenhouse gas emissions. Anyone who does not understand the environmental implications of stopping infill housing through “downzoning” and other anti-housing restrictions really needs to attend as well (that includes the self-identified “environmentalists” on the Berkeley City Council)

The conference schedule is full of stimulating panels. I particularly recommend Seattle YIMBY activist Laura Loe’s Friday at 9:45am keynote. Loe is a longtime immigrant rights, LGBT, and environmental activist who focuses on a key challenge:  persuading current opponents that they should instead be our allies.

Many anti- housing activists do not recognize the environmental and social implications of not building more housing. Loe has ideas on how to win over these folks. And here’s a spoiler alert: it’s not by yelling at them.

Thanks to Victoria Fierce of East Bay Forward and Kieryn Darkwater‏ for taking the lead on bringing this event to the Bay Area. No region of the country needs to hear the YIMBY message more.