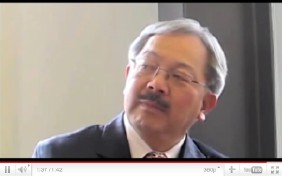 Last week, the Leland Yee for Mayor campaign released a video showing Ed Lee repeatedly insisting that he would not run for mayor. Yee campaign manager Jim Stearns said that the video was “certainly not meant as an attack,” but was instead “more of a friendly reminder that Ed Lee would not be mayor today if he hadn’t made a promise not to run.” While Stearns’ goal was to deter Lee’s entry , the video – described by the Chronicle as “scathing” – is more likely to backfire. Now, if Lee does not run people will think it was because Leland Yee called him out as a liar, and that he feared rough campaign tactics; the video encourages Lee to run to redeem his character. Further, Yee’s accusing Lee of being untrustworthy undermines his claim that if elected mayor he would appoint Lee to his former position as Chief Administrative Officer. With Yee the frontrunner in Lee’s absence, the video sends a stark message that if Ed Lee does not run and win for mayor, he will not have a city position come January.

According to the Chronicle, Stearns uploaded the video – which he titled “Promise – and said: “If I were to make a video about Run Ed Run, it might look something like this.” He tweeted about the video shortly after Ed Lee refused to rule out running for mayor, clearly believing that it would serve as a preemptive strike that would keep Lee out of the race.

But Stearns’ action is more likely to have the opposite impact. Here’s why.

Lee Does Not Cave In to Threats

As I recently wrote about CPMC’s efforts to negotiate with the mayor via press release, Ed Lee does not cave in to threats. Powerful developers or high-powered attorneys did not intimidate Lee when he was a lawyer for the Asian Law Caucus, and nothing in his record as mayor shows him as someone who caves in to threats or intimidation.

As its video shows, the Yee campaign is now threatening to define Lee as a liar, hypocrite and political opportunist. Yee and Stearns are offering a choice: stay out of the race or get ready to have your personal integrity attacked from the day you announce through Election Day.

But in their haste to preempt Lee’s candidacy, Yee and Stearns apparently did not consider that the video offered Lee an alternative choice: run for mayor or forever be known as the guy who gave up a solid chance for the mayor’s office because he was afraid of having his integrity attacked by political opponents.

Or to put it another way, the video tells Lee that the best if not only way for him to affirm his reputation for trustworthiness is to let the voters decide.

The second reason the Yee video is likely to backfire is that it undermines Leland Yee’s claim that he would appoint Lee to his former Chief Administrative Officer (CAO) position if Yee were elected mayor.

Ed Lee has always said that if he were not serving as mayor he wanted to serve as CAO. All of the major candidates have pledged to appoint him as CAO, a commitment seen as essential for keeping Lee out of the race.

But after Yee’s “scathing” attack on Lee’s integrity, and his effort to publicly embarrass the Mayor, does anyone believe these two could work together in a Yee mayoral administration? Or that Yee would appoint someone CAO for whom he has so little respect?

To put it bluntly, there is no way that Yee, the current mayoral frontrunner, appoints Ed Lee CAO.

Yee’s video told Ed Lee in no uncertain terms that he either runs for mayor and wins or starts preparing to exit city employment. Lee’s securing a position in a future Yee Administration is not an option.

Why would Yee and his savvy campaign manager Stearns unleash a video that would actually increase pressure on Lee to enter the mayor’s race? Stearns’ explanations in the Chronicle aside, there are two other possible reasons.

First, Stearns and the managers of other candidates were in full panic mode after Lee for the first time refused to rule out a mayoral run. The worst kept secret in town is that Lee wins if he runs, and the prospect of this occurring led Stearns to make a desperate preemptive strike.

Second, Stearns may believe that if Yee can undermine Lee’s integrity before voters know him as a “politician” rather than caretaker mayor, than the positives Lee now enjoys can quickly evaporate. Once Lee has a full head of steam his campaign will not be stopped, so the idea is to halt the momentum before it emerges.

But the big picture is that Yee has pushed Lee to vindicate his reputation by winning the Mayor’s race in November. And those in the “Run, Ed, Run” camp no doubt appreciate this unexpected help from a rival campaign.