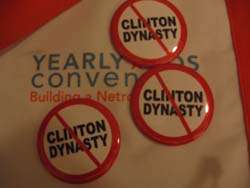 With 1,500 delegates at Yearly Kos, I only met two Hillary Clinton supporters. She is the current front-runner for the Democratic presidential nomination, and is hoping to get it by inevitability. But this doesn’t mean the blogosphere is “out of touch,” although blogger demographics clearly work against her. Hillary Clinton’s current lead in the polls comes from a higher name recognition, and a strategic muddling of her position on Iraq so that progressives don’t hate her.

Hillary was the biggest loser in the Convention’s August 4th Debate, as she defended taking money from Washington lobbyists and argued that we are now “safer” than on September 11th. While Iraq never came up in her pre-debate break-out session, that’s because only five people – including myself – got to ask her a question. Hillary’s response to my question about the Clinton years was the session’s “only moment of tension,” and confirmed she is a ruthless triangulator who will take progressives for granted. If Democrats realize this, she will lose the nomination.

“It is really no mystery why Hillary Clinton’s current lead is not reflected in the netroots,” said Chris Bowers of Open Left, and formerly MyDD.com. “The blogosphere is 60% male, and she does better with women. It’s 45% secular, and her voters are religious. Bloggers are younger, richer and better informed. In every single circumstance, it’s the worst demographic for Hillary Clinton.”

Of course, one media narrative to explain why bloggers don’t support the front-runner is that they are “out of touch” with Democratic voters, a common theme that is often used to marginalize progressive activists. But making the Yearly Kos Convention sound like a gathering of Naderites is absurd. When Dennis Kucinich said at the Debate that voters see “no difference” between the two major parties, he was loudly booed.

Another theory is name recognition – Hillary Clinton is a known quantity that reflects her lead in the polls, and less informed voters are most likely to pick her. Although 64% of New Hampshire Democrats recently said they are “still trying to decide” among the candidates, only 9% mark “undecided” when asked to make a choice. With voters less familiar with John Edwards and Barack Obama, Hillary’s the main beneficiary.

But while that’s a factor, Clinton has also modified her position on Iraq so that bloggers now thinks that she would make an acceptable nominee – though far from ideal. “She’s done a great job blurring on the war,” said Markos Moulitsas. Pandering on this issue is a strategy that’s been used before. In early 2004, when John Kerry was trailing Howard Dean because of the Iraq War, he started shifting his position – and it worked.

Clinton got a tame reception at the Convention – leading most of the media to wrongly conclude that it was favorable. But if the bloggers had been more aggressive in expressing their true opinions about her, Hillary would have called them rude and mean-spirited. Then she would have used that image to marginalize them as disgruntled lefties.

All things considered, I’m glad that the bloggers were polite. When Dianne Feinstein ran for Governor of California, she got booed at the state party convention for supporting the death penalty – and then used that in a commercial to prove she wasn’t a liberal. It is painfully obvious that Hillary wanted to get booed at this Convention; when she finally did, she said, “I’ve been waiting for this to happen.”

Hillary got booed during the Yearly Kos Presidential Debate because she refused to join Edwards and Obama and stop taking money from Washington lobbyists. Incredibly, she rationalized her refusal by saying that lobbyists “represent real Americans – nurses, social workers, and they represent corporations who employ a lot of people.”

Hillary lost even further credibility when she said that we are now safer than before September 11th. Everyone knows that the invasion of Iraq has ruined our standing in the world, and her statements that “we’ve made a lot of changes” such as taking off our shoes at airports was both naïve and insulting. Edwards had a great response about how the use of torture and other attacks on our civil liberties has made us less safe.

Hillary Clinton at her pre-debate break-out

Besides the Debate, delegates got to attend an individual break-out session with one of the candidates. None of the delegates asked Hillary about Iraq, but that’s because only five people got to ask questions. And unlike Edwards and Obama – who in their sessions blindly called on the bloggers themselves – Hillary had her Internet Director, who has heavily courted the netroots and knew who in the room was friendly, pick on people.

The first person he called upon asked a softball question about education, which Hillary proceeded to answer for nine of the session’s 30 minutes. While I don’t know if that question was a plant (and many people suggested that later), it’s clear that she chose to give a long-winded answer in order to kill time. But because I had strategically placed myself in a visible part of the room – and by dumb luck was wearing a bright red shirt that day – her Internet Director called on me during the last five minutes.

“Senator Clinton,” I said. “My name is Paul Hogarth, and I am from Beyond Chron in San Francisco. First, I’d like to thank you for having gone on the record saying that you would repeal Don’t Ask Don’t Tell – which passed during your husband’s administration. I want to ask you about four other pieces of legislation that happened in the Clinton years, and whether you would be willing to advocate their repeal – the Defense of Marriage Act, the Telecommunications Act, NAFTA, and the Welfare Bill.”

Her answer to my question was absolutely awful. Like her statements in the Debate, it exposed her as an anti-progressive triangulator – and was the tensest moment of the break-out session. If Democrats wake up and realize that the Bill Clinton years (although far better than the Bush years) had some serious issues and we cannot trust Hillary to be a progressive leader to get us out of the wilderness, she can be defeated.

Here’s what each of the laws did and what Hillary’s answer was to my question:

Defense of Marriage: DOMA, passed in 1996 when Bill Clinton wanted to deprive Bob Dole of a campaign issue, allows states not to recognize an out-of-state gay marriage. “DOMA served a very important purpose,” she said. “I was one of the architects in the strategy of fighting the 2004 Marriage Amendment, and DOMA gave us a bright line to be able to pull back the votes.”

NAFTA: The 1993 trade agreement has been absolutely devastating to labor and environmental standards. “NAFTA did not realize what was promised for a number of reasons,” she said. “We need to have an ongoing evaluation.”

Welfare Repeal: Also passed in 1996 when Bill Clinton wanted to deny Bob Dole a campaign issue, the Welfare Bill denied legal immigrants the right to get Food Stamps and SSI. It was an awful piece of legislation, and her response was that “the positive consequences outweighed the negative.”

You can watch a clip of the break-out session here.

I could have been far more confrontational in asking my question, but that would have played right into her hands because I would have sounded shrill and mean-spirited. Which is why I made a point to thank her for agreeing to repeal Don’t Ask Don’t Tell.

Hillary’s campaign was ready to spin the Convention regardless of a warm or cool reception. Either she made peace with an important constituency that makes her nomination “inevitable,” or else she was harshly attacked by a group of extremists who “don’t represent” the party.

The truth – that the bloggers knew better than fall in that trap and were just being polite – is too subtle for the mainstream media to pick up. What’s news here is not what the bloggers said or did, but what Hillary did. She hung herself when asked tough questions, and exposed herself as an anti-progressive triangulator.

Readers of this website know that we are highly critical of the San Francisco Chronicle. In fact, our name – Beyond Chron – derives from the paper’s terrible coverage of state and local politics. But as someone who played a small role in this news story, I have never been angrier at the Chronicle for painting such a rosy picture of Clinton’s support at the Convention.

The Chronicle’s coverage was by far the worst coverage of Hillary Clinton and the Convention that I have read. Most newspapers like the New York Times and the Los Angeles Times led with the Clinton-Obama flap about lobbying money, and the Washington Post said she got “mixed reviews.” None was so uncritically positive about the myth that Hillary made peace with bloggers.

The Chronicle also referred to me as “one blogger with a challenging question” – and failed to mention that I happen to be from their hometown. There was no excuse for the Chronicle to claim ignorance. I stated in my question that I was with Beyond Chron, and the Washington Post mentioned that I was from San Francisco.

Hillary Clinton did not get a warm reception at the Yearly Kos Convention, nor was she attacked by a shrill minority. Through the break-out session and her own ridiculous statements during the debate, she was exposed as an anti-progressive triangulator. And this is what could put her nomination in doubt.

EDITOR’S NOTE: Stay tuned for tomorrow’s Beyond Chron, where Paul Hogarth will conclude his report about the Yearly Kos Convention. Send feedback to paul@beyondchron.org