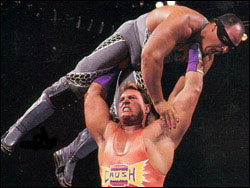 Two committees of the House of Representatives are edging toward hearings this fall that will further define the blurred lines of our junk-besotted popular culture.

The essential question before them is whether the lives of professional wrestlers are as highly valued as those of aging character actors and exploited children.

Readers of a certain age may recall that in 1982 Vic Morrow, star of the old TV series Combat!, was decapitated by a crashing helicopter on the set of Twilight Zone: The Movie. Two other actors at the 2 a.m. shoot, 7-year-old Myca Dyhn Le and 6-year-old Renee Shin-Yi Chen, met similarly gruesome ends. As a result, safety regulations for movie sets in California were reformed and federal child labor laws were strengthened.

It remains to be seen if an oversized Hawaiian named Brian Adams will be able to claim such a serious legacy. On August 13, Adams, whose most notable role was as “Crush” in the then-World Wrestling Federation’s 1980s tag team Demolition, was found dead at age 44 at his home in Florida. Though the cause hasn’t been pinned down, his chemical history is hidden in plain sight. Like dozens of other wrestlers – as well as baseball players like Rick Ankiel and Troy Glaus, and football players like Rodney Harrison – Adams received anabolic steroids and/or human growth hormone from the Internet gray-market dealer Signature Pharmacy. (In 1995, when he was still an active wrestler, Adams was arrested for purchasing steroids and owning an illegal stun gun.)

Adams became untimely pro wrestler death No. 10 in 2007. Nos. 6 and 7 were the now notorious Chris Benoit and his wife Nancy. In June, Chris strangled Nancy and their 7-year-old son before hanging himself in a case that gripped cable news and belatedly shone a light on a billion-dollar industry’s pandemic of drugs and death.

Since 1999, World Wrestling Entertainment has been a publicly traded company whose board of directors includes people like Lowell Weicker, the former Connecticut governor and senator. In his TV plotlines, WWE chair Vince McMahon paused briefly after the Benoit carnage to wipe a tear away, abandoned a shtick in which he faked his own death, and commenced another in which it was announced that someone else in the troupe was Vince’s “illegitimate son.” Neither script was referenced in the text of McMahon’s commencement keynote speech this year at Sacred Heart University.

Oh yeah – Chris Benoit also got drugs from Signature Pharmacy. Further, Benoit passed an April drug test under WWE’s fraudulent “wellness policy” despite the fact that he was receiving from Dr. Phil Astin – a doc to the stars now under federal indictment – a ten-month supply of steroids every three to four weeks. Benoit’s postmortem toxicology test found a testosterone level five to ten times above normal.

And as Sports Illustrated and other media outlets have revealed, a dozen or so other WWE performers were on the Signature Pharmacy customer list, according to an investigation by the district attorney in Albany, New York. This constituted such a blatant violation of the “wellness policy” that not even the carnival chieftains or their drug-testing enabler, a Nashville lab headed by one David Black, could explain it away.

WWE announced the suspensions of ten wrestlers, but not their names, leaving it to obsessed fans to sort out who got spared (and why?) and who got temporarily consigned to oblivion on “Raw” and “SmackDown.” It’s not even clear if the “suspended” wrestlers are simply on paid leaves while they hope (futilely this time, I suspect) for the scandal to blow over.

The most hilarious name on the Signature list is a blowhard who goes by the ring handle “Mr. Kennedy.” His indiscretion cost Kennedy the career opportunity of a lifetime, as he was reportedly about to be tapped as Vinnie Mac’s bastard. Kennedy’s drug cocktail included anastrozole, which is used appropriately by breast cancer patients and desperately by steroid freaks to counteract the condition known in gyms as “bitch tits.”

The reason this is funny is that Kennedy had been the most vociferous defender of the wellness policy during the Benoit cable news yak-a-thon, aggressively attacking the credentials and motives of former wrestler Marc (“Johnny B. Badd”) Mero.

Mero’s particular crime against the business is that he holds up a list of all the deceased wrestlers he once wrestled with – it runs to 27 names now – and says, “Except for a military person in Iraq, who else can say that 27 of his work colleagues died young? It’s time to clean up wrestling’s drug problem.”

The Signature Pharmacy dragnet shows that the WWE wellness policy “isn’t worth a flip,” said Congressman Cliff Stearns, the Florida Republican who is the ranking minority member of the House Energy and Commerce Committee’s Subcommittee on Commerce, Trade and Consumer Protection. Stearns and the subcommittee’s Democratic chair, Bobby Rush of Illinois, have corresponded with WWE for details on its drug policy and studies of deaths in wrestling (the company has conducted none), and spoken of hearings. So have Congressmen Henry Waxman of California and Tom Davis of Virginia, respectively the chair and ranking minority member of the Committee on Oversight and Government Reform, which conducted the infamous baseball steroid hearings.

In response, McMahon – who seems to have a Jim Morrison complex even though he’s 62 years old himself – mocked the committees in a TV skit, making an outdated allusion to Barney Fife, the bumbling deputy sheriff played by the late Don Knotts. In a pep talk to the talent on September 1, McMahon’s daughter and co-heir apparent, Stephanie, and her husband, wrestler Paul “Hunter Hearst Helmsley” Levesque, assured the boys that Vince would handle the congressional probes and would even show up at the hearings wearing a clown wig.

Stearns has been citing a number from the appendix of my book Wrestling Babylon: 89 deaths, from 1985 through 2006, of wrestlers under age 50. In a more rigorous study, Dave Meltzer of the South Bay-based Wrestling Observer Newsletter – whom Frank Deford calls “the most accomplished reporter in sports journalism” – cites 62 dead wrestlers under 50 in the last ten years who worked for WWE or other “major league” organizations. Meltzer estimated that this would be equivalent to 435 National Football League players or 186 baseball players.

To give the number further perspective, a study of the mortality rates of more than 1,000 rock stars over a period of 40 years, by Britain’s Journal of Epidemiology and Community Health, found that they are twice as likely to die young as the general population. Twice as likely? That wouldn’t even make Vince McMahon’s “angle” meter.

Irvin Muchnick is author of “Wrestling Babylon: Piledriving Tales of Drugs, Sex, Death, and Scandal” and co-author of “Benoit: Wrestling with the Horror That Destroyed a Family and Crippled a Sport,” which will be in bookstores next month. His full-length account of the Benoit case is scheduled for 2008 publication.