Wrestling’s Linda McMahon is in Connecticut Senate Race to Stay 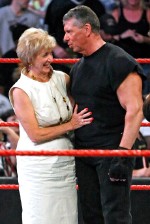 Many pundits are saying that Dodd’s retirement threatens the Democratic Senate super-majority, but they can’t have it both ways. The fact is that Blumenthal, who is much more popular than the corruption-addled five-term incumbent, stands a better chance of retaining that seat for the party.

Similarly, those who observed how McMahon has used her deep pockets to rise to the final elimination of the Republican cast of candidates can’t expect her to go back to counting beans and crotch shots at WWE headquarters in Stamford just because she seemingly has lost her juiciest rhetorical target.

Either way, someone who has spent a quarter of a century following the diabolically successful McMahon family is here to tell you that Linda is in this fight for keeps. Get over it, people.

That includes you, Peter Applebome, the revolting Connecticut correspondent for the New York Times, who outdid himself with clownish kitsch references and lack of insight in assessing the effect on McMahon of the Dodd development. The aging Senator was “one perfunctory drop kick, body slam and three-count from being a goner,” wrote Applebome, who added that like pro wrestling, “politics is now increasingly about polarizing brands,” and the abdication deprived McMahon of her candidacy’s raison d’etre.

The problem with this kind of thinking is that McMahon is a partisan Republican only by convenience. In protecting their business interests over the years, Linda and Vince have spread their campaign donations to politicians of both parties – even to Joe Lieberman, a one-time member of the advisory board of the Parents Television Council, which had to pay millions to WWE to settle a defamation suit.

The idea that a money-grubbing political neophyte would balk at the first conventional sign of a negative shift in her dynamics ignores the far greater likelihood that she will soldier on as a faux anti-establishment gasbag. Horse-race watchers are blind to this fundamental. As is the Times as an institution, which has spent decades soft-pedaling the coverage of WWE’s real scandals, while running cute features about its popularity and profitability.

Remember, folks, that the McMahons are visionaries of not just their particular brand of late-empire junk entertainment, but also of several efforts at brand extension, including some colossal failures. In 2001, WWE (then known as World Wrestling Federation Entertainment) and its broadcast partner NBC combined to sink just south of $100 million into the historically futile XFL football league. For people like this, discretion is not the better part of valor.

I am covering Linda McMahon’s race not because I presume to tell the voters of the Nutmeg State which way to pull the lever; states, like nations, get the leaders they deserve. I am shadowing this wacky candidacy because it holds some hope for accomplishing what the local authorities, the media, and even Congress failed to pull off following the Chris Benoit murder-suicide in 2007: meaningful scrutiny and oversight of the powerful and culturally influential pro wrestling industry, whose profits are built not just on cartoon story lines, but also on a work environment supporting dozens of avoidable deaths every year

Last month my blog reported that WWE lied through its teeth about the contacts of its medical director with researchers at a West Virginia institute studying brain damage in sports. The medical director, Dr. Joseph Maroon, is also a Pittsburgh Steelers team doctor and one of the National Football League consultants who dragged their feet on the evidence of the long-term effects of concussions, before the House Judiciary Committee finally started zeroing in on the topic last year.

Not a single news outlet picked up my story – not even ESPN.com, to which WWE had lied.

So please, everyone, stop sucking your thumbs over the pointless question “Whither Linda?” She is going nowhere except right back in our faces.

Irvin Muchnick, author of CHRIS & NANCY: The True Story of the Benoit Murder-Suicide and Pro Wrestling’s Cocktail of Death, blogs at http://wrestlingbabylon.wordpress.com. He is @irvmuch at Twitter.