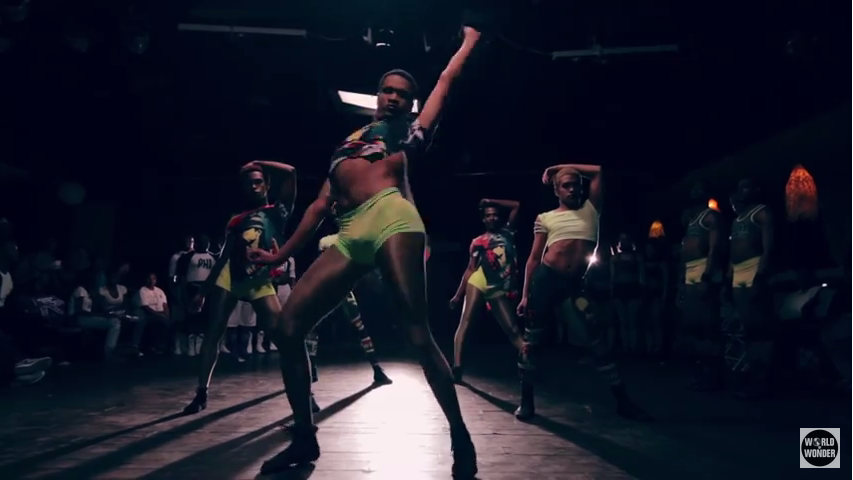 Schrager recounts the sometimes legally dubious methods used to run the nightclub. Until

What will be the next black art form to be co-opted by white people? Jamal Sims’

college games. The coordinated twisting and moving of bodies resembled the movements of an

untamed horse. The incredible physical flexibility on display so impressed more than a few gay

bucking) at the old Traxx nightclub,

showmanship and discipline to the dance floor.

Ironic mockery won’t be found in a bucking competition. A shoe that falls off or a

post-performance split in a shorts’ rear serves as a kiss of death for a competitor. The judges

are actual majorettes who have little tolerance for simple mimicry. A J-setting team’s dedication

community bonded together in chosen families. The rotund Anthony leads the legendary

has a butch lesbian junkie mother who regularly cycles in and out of prison.

mainstream, the bucking teams don’t let that prejudice deter them from giving back to the

to reflect on the legacy of the slain civil rights leader. Napoleon’s bucking activities don’t

The visual heart of “When The Beat Drops” obviously lies in its bucking performances.

Seeing these dances challenges the idea that men are inherently less flexible than women. The

speed at which arms fly and bodies flip would give a Shaolin kung fu master pause. Some

unexpected leg twists will cause a viewer to gasp.

eye-rolling. But Phi Phi wants revenge on the competitive dance floor against the equally

talented Sundari. Given the variety of musical and performance styles seen during the

competition’s phases, boredom will only befall those who don’t find anything entertaining in

again with varying results in entertainment..

fluent in the local language nor in possession of a plan for touring Sao Paulo. But as Kamiki’s

short shows, the language barrier doesn’t bar a man from either appreciating a male jogger’s

trim body or developing a tenuous friendship with someone more familiar with Sao Paulo.

“Set Me As A Seal Upon Thine Heart,” the Omer Tobi short, tells of a young gay man

escorting a confused older man out of an Israeli gay sauna. One could read the film as an

Alzheimer’s sufferer reliving the fateful youthful moment when he went firmly into the closet.

However, reaching that interpretation requires enduring an unambiguously boring journey.

needed life back to the program. Marc-Antoine Lemire tells the story of a pre-night out meeting

between transwoman Alexe and gay best friend Carl. A few glasses of wine leads the duo to

speed out of the friend zone. The film sweetly renders the slow transition from physical curiosity

to physically finding out more about a person you thought you knew well. Knowing the

the belief that only sex between heterosexual men and women can be considered normal.

well-appointed apartment. Marco is dead from a drug overdose. In a fog of possible what-ifs

regarding their now lost emotional connection, the younger man is unexpectedly joined by

Marcelo, another of Marco’s former lovers. The two men are strangers to each other, Yet the

physically grieving their mutual loss. Equally importantly, through the touch of skin and smell of

body sweat, each man learns something new about Marco and his desires. For those who

“Fun In Girls Shorts” may have leaned a little too heavily on familiar if solid ideas. Aside from a

mold-breaker or two, a particular short’s success depended more than anything on execution of

Kicking the cinematic festivities off is the Zoe Lubeck coming out tale “Grace And Betty.”

Betty that she’s a lesbian. A gag-inducing Nicholas Sparks quote nearly derails the fun. But

what ultimately makes Lubeck’s story work so well is its mirrored emotional structure. While the

younger woman struggles to come out of the closet, the older woman goes to inept lengths to

backup does wonders for easing the coming out process.

finally tell best friend Roxanne that she loves her. But the baby lesbian has to improvise when

Roxanne brings along Evelyn, a new girl who happens to be prettier than Jesse. Kimia

Behpoornia’s performance as Jesse is sympathetic enough to spur two viewer wishes: that

Jesse has the opportunity to express her feelings and for Roxanne to reciprocate Jesse’s love.

By contrast, Lauren Garroni’s “Dick Sisters” could not end fast enough for this viewer.

Tessa and Alli are two ex-friends who both dated the now dead Dick. The man’s untimely

demise eventually causes the two women to rebuild their friendship and take it to the next level.

Garroni fails to bring out the absurdities that would make the short work as dark comedy. Nor

All Right.” The central plot of womanizing Blaire rebounding from a break-up by bringing three

different dates to the same party could have worked as a comic farce. However, Heaton’s

leaden pacing and the actors’ flat performances kills any joy in either comic set-up or payoff.

Sibling rivalry provides the starting point for Julia Bostrom’s“Children Alike.” During the

preparation for a birthday dinner for their parents, Johannes introduces his new girlfriend Wilma

to his sister Hanna. However, the two women aren’t strangers to each other. The fun starts

from knowing how competitive Johannes and Hanna are with each other. Is Hanna’s renewed

locked herself in the bathroom on the day of her wedding to a well-off man. Can former college

roommate/lover Sam talk Katie down and even re-kindle their old relationship? The short’s

flashback structure may puzzle some viewers, but it touchingly pays off by capturing the details

of what Katie will lose by marrying the guy. However, a little of Todd the fussy wedding planner

such as The Lexington Club as well as the preciousness of their existence. But she also

catchily celebrates the diversity and resilience of Bay Area lesbians, which ranges well beyond

the narrow femme look mainstream culture is comfortable with.

Equally lacking in bourgeois glamor yet bristling with life is Brazil’s Porto Alegre. This is

Emotional loner Pedro lives in Porto Alegre. Thanks to an unfortunate college fight

which ended with another student losing an eye, his employment prospects are limited to his

NeonBoy performances. The onscreen name comes from the neon paint that Pedro daubs over

“Hard Paint” is divided into three sections, each referencing a person that Pedro is

only when Pedro loses all these people will he be able to find himself.

Then again, as the directors (also Porto Alegre natives) show, loss seems baked into the

town’s very fiber. Time and incoming waves of water physically eat away at its buildings. Those

who can leave do. Those who stay seem to have no choice given lack of money or opportunity.

Pedro admittedly lacks money and opportunity to leave Porto Alegre. But it feels as if

in his crumbling apartment building by claiming the rent is cheap.

fail. His trim muscular body distracts the undiscerning from noticing that he lacks anything

because he does have dance training experience. Equally importantly, as shown by such

The neon paint performances are never less than visually arresting. They possess an

partial glimpses of the sexy bodies that’s their fleshly canvases.

Wonderfully complementing the beautiful images is an electrifying soundtrack. Even if

English lyrics or translations are lacking, the insistently heavy beats of many songs hypnotize

the viewer into being swept up by the music despite language differences.

“Hard Paint” is not a film for those who prefer gay film comfort food. It offers no easily

won victories or lovable heroes. At its realistic best, its small emotional changes suggest the

possibility of a new start.

scraping by working class family. The three brothers’ childhood is shadowed by their violent

of chosen family and second chances.

Drug addiction has caused Dede’s life to implode. Her photojournalism work has dried

up. Her engagement to Chloe has ended badly. Retired investment banker Anna flies in from

Hong Kong to intervene in her addict daughter’s life. A house is rented in Los Angeles so Dede

has a chance to get clean under the eye of her divorced mother.

One of Dede and Anna’s neighbors notice the new additions to the ‘hood. Peter is a

widowed accountant. Laura is his adult autistic daughter. The father may love this daughter

who resembles his dead wife, but he’s over-protective of the young woman.

her father’s home leads to changes in both families’ lives.

Chu’s film shows itself unafraid to wear its emotional heart pinned to its chest. But rather

than devolve into sentimental glop, the film makes all four of its main characters into complex

characters who reside at various points along the morally flawed spectrum. This approach is

particularly refreshing since Dede, Anna, Peter, and Laura are all Chinese, and this sort of

emotional complexity is not something mainstream Hollywood usually bestows on Chinese

characters. To their credit, the four central actors make full use of the rich acting opportunities

Two particular moments bring out the essential goodness of the main characters. An

about their parenting abilities. Dede’s change of mind in making Laura her photojournalism

animation will keep viewers a little off-kilter. Why is the story told in this manner? The

interviews allow the characters to be candid about their feelings for the camera. But who’s

doing the interviewing and why is kept a mystery for much of the film.

traffic transform into blurred lines. A side benefit of the animated sequences is its obviating

It’s not until the very end that the viewer will understand the meaning of the film’s title.

But when that insight comes, a final warm smile will reward this very touching and affecting film.

(“When The Beat Drops” took the Outstanding Documentary Jury Award. “For Izzy” took the