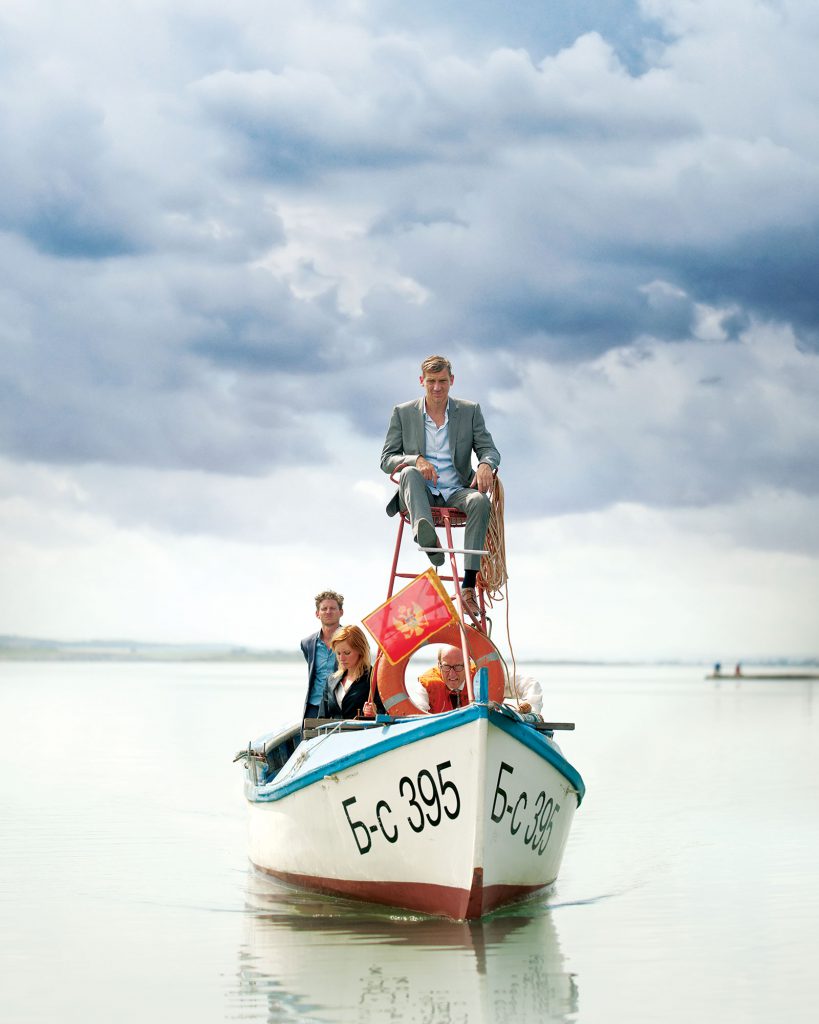 Royalty taking a leave of absence from their royal duties has long been a film plot staple.  But Peter Brosens and Jessica Woodworth’s “King of the Belgians” offers a wonderfully hilarious spin on the subject.

Belgian king Nicolas III has gone on a goodwill mission to Istanbul.  His royal retinue consists of chief of protocol Ludovic, the press attache Louise, and valet Carlos.  Recording the visit as part of the puff piece video “Our King” is former reporter turned filmmaker-for-hire Duncan Lloyd.

The friendly mission takes a serious left turn when news arrives that the Walloon region openly declares it’s seceding from Belgium.  A swift royal return is called for, but that’s not what happens.  Thanks to a freak solar flare that grounds all flights, Nicolas III and his retinue must take a mishap-filled journey through the Balkans.  They will encounter such things as a road-crossing turtle, a yogurt tasting jury, and some guys in weird furry costumes.

One of the film’s running jokes involves the monarch’s troubles in writing a speech on freedom.  His false starts ironically come from his not knowing personal freedom himself.  As Lloyd notices, the decorum that attaches to being a monarch means Nicolas is little better than a puppet himself.

But the film’s best joke is its turning the “royals slumming among the commoners” story on its head.  Like previous stories, Nicolas III and his group never permanently lose their privileged status.  Yet as the misadventures mount up, the Belgian monarch starts acting as if regaining that status has dropped in priority for him.  What begins as the humorous sight of a member of royalty looking like something the cat dragged in after a particularly vicious fight eventually becomes a symbol of Nicolas’ rediscovered humanity.

The Flemish vs. Walloon behavior jokes will probably fly over American audiences’ heads.  But the theme of discovering personal freedom through ludicrous misadventures crosses cultural boundaries.

Anca Miruna Lazarescu’s historical comedy/drama “That Trip We Took With Dad” also involves a journey that goes sideways.  The film manages the tricky task of making a historical period come alive with specific detail while capturing the moments of life that remain timeless, such as children arguing with parents.

It’s 1968 Romania, and Prague Spring euphoria has reached the small Romanian town where the Reinholtz family lives.  Father William has little love for the Soviet overlords while younger son Emil has taken to covertly expressing pro-Dubcek sentiments.  But older son Mihai is a Securitate informant.  One perk of being an informant is arranging a family trip to East Germany for William’s lifesaving brain surgery operation.  Yet the price of being an informant soon weighs on Mihai’s soul.

Opportunity arrives when Soviet tanks arriving to crush the Prague Spring interrupts the Reinholtzes’ trip.  This Soviet military push forces the family to travel home through West Germany.  But can Mihai and his relatives take advantage of a chance to leave Romania behind?

In Lazarescu’s take on the clash between idealism and reality, the director balances both honest opinion and fair treatment for the characters’ positions.  Ulrike von Syberg and her leftist friends see Communism as offering a meaningful alternative to capitalism.  Mihai sees a political system that hasn’t solved the problem of the powerful oppressing the weak.  Western material abundance may spark awe, but not when the ability to enjoy it is non-existent.  Paranoia and stress result from living in a society where Informing on one’s neighbor or worries about being informed on are unpleasant pressures.  But what if going along with the system was your only reasonable opportunity to give your family a better life?

The available technology of 1968 will jar some present-day viewers.  There are no cell phones, flatscreen TVs, or MP3 players here.  But the emotions displayed by the main characters have relatable roots.  Emil’s desire for a better Romania underpins his risky expressions of anti-Stalinist sentiment.  Mihai may be obligated to his Securitate handler to do his job.  But he draws the line at betraying his brother.

Lazarescu’s delightful film makes the 1960s’ passions live again in its capture of both the period’s musical joys and sorrowful events.  The director turns the recent past into the present’s mirror.

At least the Reinholtz family has some place to call home.  Wilson Ugabe, the protagonist of Roland Vranik’s heartbreaking drama “The Citizen,” is trying to build a new home for himself in Hungary.

Without needing explication, enough hints are thrown out regarding the roots of Wilson’s desire for Hungarian citizenship.  His home country has dissolved into the type of social chaos where babies are deliberately cut out of mothers’ wombs.  He’s also suffered a vaguely alluded to personal loss.  By comparison, Hungary seems a place of stability where he can grow new roots.

The wannabe citizen is optimistic enough to believe he has a strong chance of achieving his goal.  Tutoring in Hungarian culture from ex-teacher Maria goes swimmingly.  His job as a supermarket security guard is stable, and fellow employees like him.

Contrary to popular bromides, obeying the laws and playing by the proverbial rules don’t suffice to be socially accepted as a Hungarian.  A casually delivered N-word insult presages Wilson’s painful discoveries of the barely concealed racism that exists in Hungarian society.

Vranik leaves to viewers’ imaginations the reason for Wilson’s extraordinary efforts to prevent young pregnant fugitive Iranian Shirin from being caught by the authorities and deported.  Shirin seems lacking in long term plans for legally staying in Hungary.  Survivor’s guilt, subtly expressed by Wilson’s fixating on the bloodier acts of Hungarian rulers, is a possibility.  Or perhaps it’s the realization that the human heart is weaker than the law’s inflexibility.

“The Citizen”’s ultimate heartbreak comes from seeing the long-term effects on Wilson of having his dreams continually crushed.  The final expression on Wilson’s face is that of a man whose awareness has been permanently branded with the knowledge that the concept of home is meaningless to him.