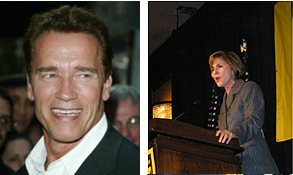 With Senator Boxer already holding fundraisers for her re-election in 2010, rumor has it that Arnold Schwarzenegger will run against her – when term limits force him out of the Governor’s Mansion. Arnold told a reporter on February 23rd that his “options are open” about a Senate run, and did not rule it out completely.

But how serious is Arnold about challenging Barbara Boxer, and how much of it is just hype from an adoring media that simply can’t bear to see him retire from politics? It’s unclear exactly how the rumor of him running got started, and whether he would want to be a mere legislator in a chamber of 100 egos. If Arnold does challenge Boxer in 2010, he will quickly find that the political dynamics are very different from his prior runs and he would face an uphill battle. Be that as it may, expect the media to continue drumming up his candidacy.

I first heard about Schwarzenegger running against Boxer last November on the day after the Election, when pollster David Binder gave his regular re-cap of the election results. It’s not uncommon at these events to have political junkies speculate about future elections, and there was nothing at the time to convince me that it was any more than just talk. But word about it has intensified over the past few months that now Boxer is raising money to prepare for such a prospect, and Democrats are relieved that she is taking the threat seriously.

The fact is – the media loves Arnold, and simply can’t stand the idea of covering politics without an action-hero celebrity around. Arnold’s name sells newspapers, and the Governor’s appearances at Editorial Board interviews elicit more requests for his autograph than tough questions about state government. Last year the Chronicle did an atrocious job of covering the Governor’s race, as reporter Carla Marinucci repeatedly did puff-pieces on Schwarzenegger and hit-pieces on Phil Angelides. Arnold’s a larger-than-life figure, and it makes the job of covering state politics a hell of a lot more fun.

In 2010, Arnold won’t have many options to pursue a political career besides running for the U.S. Senate. Even if the state legislature convinces voters to extend term limits in 2008, the measure in question won’t affect the Governor’s office – so Arnold will be termed out anyway. He can’t run for President either, because the Constitution bars the Austrian-born actor from seeking the White House. And unlike Jerry Brown, don’t expect him to run for some petty constitutional office – could you imagine Arnold as the state Insurance Commissioner?

The media wants Arnold to run for Senate in 2010, or any other high-profile office that will help attract attention. It’s noteworthy that when Arnold was asked if he would run against Barbara Boxer, he was also asked if he would consider running for Mayor of Los Angeles. His response, though technically keeping both options alive, was far from definitive. “If you serve the people well,” said Schwarzenegger, “your options are open and you can decide at the last minute anything. If you want to go back to show business, or just go into business or to run for another office, all those options are available.”

But there’s another problem with an Arnold run in 2010 – does he really want to be the junior Senator from California in a chamber with 99 other legislators? When Rudy Giuliani was Mayor of New York City, he was so popular that media pundits consistently touted him as a candidate for U.S. Senate. But like Schwarzenegger, Rudy’s a “tough guy” who thrives in an executive capacity — it’s hard to believe either man would fit in well deliberating in a legislative chamber or sitting through committee hearings.

Normally, moving from state to federal politics is a step up – and there’s no doubt that Senator from Rhode Island is more prestigious than Governor of Rhode Island. But California is a unique state and as Gray Davis once said, you’re not just “any Governor.” While California Senators have moved up to the Governorship (like Pete Wilson did in 1990), it is extremely rare to do it the other way round. Jerry Brown tried it in 1982, but did not succeed. If Schwarzenegger runs and defeats Barbara Boxer, he would be the first sitting California Governor to win a Senate seat since Hiram Johnson in 1916.

Finally, there’s a more important reason for Arnold not to run for Senate – by challenging Barbara Boxer, he could lose. Boxer’s approval ratings may not be as high as Arnold’s, but she is extremely well liked among progressive Democrats. Any challenge against her re-election would involve attacking her “liberal” record in the U.S. Senate. It won’t be like when he ran against Phil Angelides (who voters had no opinion of) or Gray Davis (who voters despised.) Boxer’s a far more feisty candidate, and an attack from the Terminator will rally the Democratic base.

Arnold was not popular in 2005 when he campaigned against the Left, as he called Democratic legislators “girly men” and threatened to “kick nurses’ butts.” He suffered a humiliating defeat in his Special Election, and could have been toast for re-election if he didn’t re-shape his image as a moderate, non-partisan figure. He was also helped by the brutal Democratic primary between Phil Angelides and Steve Westly — which can only be described as a “murder-suicide” pact – while Arnold prepared a disciplined campaign message regardless of who would be his opponent.

In 2006, the Angelides camp believed that they could win if they tied Schwarzenegger to George Bush and the War in Iraq. But that didn’t resonate because (a) voters had their own opinions about Arnold apart from Bush, and (b) a Governor has nothing to do with foreign policy. But running for the Senate will be a different story, and Arnold’s support for the War is more likely to affect voters. Boxer has always opposed the War, and will be a credible moral voice on this salient issue. Even if by 2010 we have completely pulled out of Iraq, there is no doubt that we will still be suffering the consequences.

Arnold may still run for the Senate in 2010, but at this point it’s probably just hype from a desperate media that wants to have Schwarzenegger around. And if he does run against Barbara Boxer, he can’t expect it to be as easy as his previous statewide runs have been.