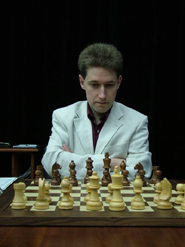 There are just four players remaining in the 2004 World Chess Championship, being held in Tripoli, Libya, including England’s Michael Adams. Joining Adams are former Soviet republic players, Veselin Topolov, Teimour Radjabov, and Rustam Kasimdzhanov. After England’s loss to Croatia in both soccer and tennis, Adams may be their last hope!

Adams defeated Armenia’s Vladimir Akopian with a win and a draw, to move into the semi-finals. He had previously defeated America’s last chance, 16 year old Hikaru Nakamura.

Again a seemingly quiet choice of opening as the players both trotted out the Petroff Defence. This is an opening notorious for a high percentage of draws so black’s choice is clear and psychological. Additionally Adams has played this line of the Petroff quite well with black. I could not find any games of Akopian with the variation chosen so it appears that he had something up his sleeve.

Akopian let loose his novelty 16.Bf4 but this did not have any major effect on the evaluation of the position and after a number of pieces were exchanged it appeared that black had equalized. Adams then compromised his pawn structure with 20.bxc6 and Akopian started to pull ahead. Adams played weakly on move 29 with 29.Rf7. Instead Rad8 would have been stronger and equalizing.

Akopian built up a persistent advantage based on black’s weak pawns. He did not seem to be making much progress around move 35 and repeated the position a few times to gain some time on the clock.

However immediately after the time control Adams equalized with 41.Rf6! After the bishop and bad pawn on c7 were exchanged for their strong counterparts the draw was easy for Adams. Good game by both players. Next up for Adams will be Teimour Radjabov. If Adams wins, he will be only the second Briton in the modern era to play for the title since Nigel Short.

E. “Doc” Smith is a former Rhode Island Amateur Champion, and has won divisional titles in the U.S. Amateur Team Championships for Brown University as well as the Rhode Island Chess League Championships. He has also taught chess to kids in S.F. schools, where he has recently directed several successful citywide tournaments.