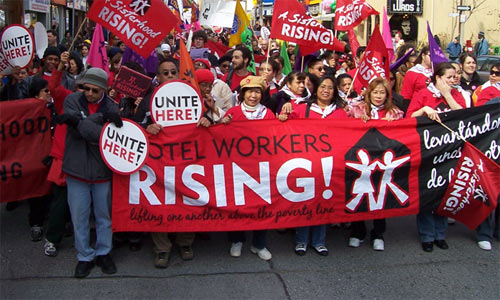 American workers are also represented by national unions that have the most resources, the biggest staffs and the largest bank accounts, greater than any other trade unions in the world.

Yet, without question, American labor is politically the weakest in the world among the large economies, largely because we remain so violently divided.

For example, no advanced industrial country on the planet matches our bloody record of police repression against the Black Community.

By comparison, the British independent newspaper, The Guardian, has documented 940 police killings, and counting, in the U.S. this year alone. And, unarmed Blacks are twice as likely to be murdered by cops than whites.

Of course, this begs the question, easily answered by those of us who claim institutional racism, of why it takes investigative reporters an ocean away to expose our homegrown bloodshed instead of U.S. government agencies or domestic media outlets.

In any case, our largely divided working class not only allows for more police repression, it also weakens us so thoroughly that it results in American unions having a vastly reduced overall political impact.

For example, American unions provide the least social benefits to our class when compared to other industrial countries where working people are more united and where they enjoy some expanded version of national healthcare, better access to education, extended maternity leave, longer vacations and earlier social security.

For those who believe unions should forgo social activism and narrowly confine ourselves to collective bargaining – representing members on the job and negotiating wages and benefits exclusively – I say this, it’s not working and never has.

Even in wages and benefits, we measure a lowly 14th among the top 20 countries in the world.

In measuring almost every social and economic indicator, we register below those of our sisters and brothers in Europe.

The contrasts mentioned above have nothing to do with differences between the various ruling groups of each country. On the contrary, they are largely the same greedy and callous bunch all over the globe.

In Europe, look at how the English rulers so cruelly dominated the Irish and how the French brutalized the Algerians, both examples only a few decades old. More recently, look at how European countries currently operate through NATO as war partners of the U.S. in the Middle East.

No, the explanation for disparities in living conditions between the two continents lies not at the top but at the bottom where the working classes were embedded from birth with vastly different political messages.

European trade unions were formed in the late 1800s, in many cases by mass Socialist parties conveying the concept of social solidarity and of defending the social and economic interests of the whole class broadly defined – as workers on the job and as citizens in the community.

This political commitment and subsequent unity in action resulted in the substantial social achievements I mentioned earlier.

Very importantly, this “unified wall of social solidarity” not only dramatically curbed the greed of the corporate elite by extracting enormous concessions, it also dramatically restrained their ability to unleash police violence against popular movements for reforms.

This enormously powerful social solidarity has, no doubt, been weakened in the last 25 years as union leaders in Europe have become more conservative and as the mostly white European working class has been challenged to embrace immigrants of color.

But, nonetheless, there is still a legacy of the power and effectiveness of 20th Century “Social Unionism” in Europe and it remains qualitatively superior to the history and experience of the largely conservative American unions who had racism deeply embedded into its late 19th century founding structures.

Of course, there are very honorable exceptions in our labor history but we are speaking here of the dominant trend of American unions.

Racism is Our History

In 1902, shortly after our national unions formed, historian W.E.B. Du Bois documented 43 national unions that had no Black members with another 27 barring Black apprentices completely.

It got better with the rise of the CIO union federation in the 1930s when the steel and auto plants were organized, but, this experience can be misleading.

Clearly, organizing auto and steel plants would have been impossible without the inclusion of Black workers who, when excluded from unions, were very successfully used by employers as scabs to break strikes.

This occurred on a massive scale with tens of thousands of Black and Mexican workers during the failed 1919 national steel strike.

Learning from this experience, steel and auto union organizers appealed in the 1930s to Black workers, for the first time in history, to join the new auto and steel industrial unions.

This newfound unity resulted in the largest growth spurt and most successful unionization campaigns in our history. There were 500,000 Black CIO members by 1945.

But, with great disappointment, I must admit this absolutely did not represent a fresh civil rights’ commitment by our unions.

For example, after the merger of the two national federations into the AFL-CIO in 1955, a powerhouse representing around 35 percent of American workers, the new federation caved to reactionary McCarthyite witch-hunt and Democratic party-Dixiecrat pressures, completely backing off the CIO post-war pledge to organize the south.

Thus, incredibly and tragically, at the same time as courageous civil rights activists were risking their lives confronting Jim Crow, our powerful and now united union federation walked away from the field of battle.

Worse yet, later in the 1960s, even the great former CIO union, the United Steel Workers of America (USWA), along with U.S. Steel owners themselves, were both successfully sued by civil rights organizations for enforcing systematic exclusion of Blacks from promotions.

It does not stop there.

During this same period of the 1960s, in Detroit, Black auto workers formed union caucuses making very credible accusations against, again, a former, militant CIO union, the United Auto Workers (UAW), for both ignoring and tolerating racist discrimination by the auto companies.

As it stands today, no doubt, many improvements have been made in employment law and many advances in how unions earnestly defend the rights of all members on the job.

But, as far as the modern political record of our national unions, at a minimum, they can be characterized as either shunning the whole issue of racism or of evading any real involvement, seldom going beyond just words on paper.

Most notably, retreat from the field of battle repeated itself with the failure of AFL-CIO leaders to appear in Ferguson, MO after the murder of Michael Brown last year.

This was a conscious political act of cowardice by our national leaders who chose instead to issue press statements of concern.

We cannot continue to ignore the deep prejudices of the white working class. Our divisions can only be breeched by new political approaches that aggressively defend the social and economic interests of the Black community and all people of color and women.

These must be our principles boldly stated, defended and implemented.

It will not be easy reversing the whole previous backward trajectory of labor. But it is the only solution to end our political isolation from the working-class majority, people of color and women, and to become the vibrant, growing movement the CIO once was.

This includes addressing the enduring legacy of discrimination whereby over half of Black, Latino and women workers earn under $15 an hour.

A good start would be by embracing the millions of low-wage Fast-Food workers, Walmart workers and Home Care workers, who have been targeted for this super-exploitation by the bosses,

Only then will our lowly membership numbers stop plunging downward, languishing on the bottom along with our morals and principles.

*After being invited by the Council to speak about the critically important Black Lives Movement, my Machinist Local Lodge 1781 membership meeting voted for me “to explain how and why Labor should oppose racism and discrimination and stand up for social justice, fairness and equality in the community every bit as much as we do for our members on the job.”

This theme ran through my remarks but I am solely responsible for the presentation itself.

Carl Finamore is former president (ret) and current Machinist Lodge 1781 delegate to the San Francisco Labor Council, AFL-CIO. He can be reached at local1781@yahoo.com