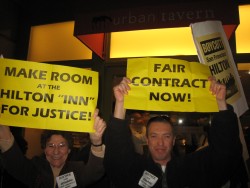 Nationally, hotels experienced a record 5.7 percent rise in the occupancy in 2010 leading prominent analyst R. Mark Woodworth to comment that “the swift pace of recovery in the lodging industry has been remarkable … a base has been established for very strong gains in both revenue and profits in the years to come.”

Yet, major hotels like the Hilton and Hyatt are still demanding dramatic cuts in health benefits and pensions along with significant increases in work assignments.

The hotel union, UNITE-HERE, is responding. On December 16, there were protests in San Francisco and Honolulu against the Hilton and a day-long strike against the Palmer House Hilton in Chicago.

Meanwhile, management is reciprocating. In San Francisco, for example, they are stepping up their harassment as the contract dispute with 9000 workers at 61 hotels enters its 17th month.

“Hotel owners prefer dealing with attorneys and arbitrators in the quiet decorum of the grievance procedure but we’re going way beyond that,” declared San Francisco UNITE-HERE Local 2 President Mike Casey as he walked a picket line with several hundred supporters in front of the Hilton, the city’s largest hotel boasting some 1900 rooms.

He was clearly irritated by the latest firing of a union activist by Hilton management but he was also very determined and vowed that “this particular issue is going to be settled through good old-fashioned street protests.”

Casey was referring to Hilton bartender Johan Tahir, who worked 22 years in the industry, earning several management awards of appreciation during those productive years of service before being summarily discharged in what the union president described “as another example of retaliation against an outspoken union activist.”

In fact, it is true, there have been numerous threats and several actual victimizations the last few months. For example, a front desk clerk at the Hotel Frank was fired in September for an extremely petty infraction followed shortly thereafter by the termination of another veteran activist, Marc Norton, for allegedly not knowing how to perform his bellman job despite his twelve years of experience.

The firing of Johan is no less unreasonable says Local 2 Field Representative Lorraine Powell, who described Johan as “an employee with a reputation for honesty and fairness. It makes the charges against him very hard to swallow. Even management acknowledged he is a very good bartender. In any case, the allegations against him would never result in a termination under ordinary circumstances but since Johan is always willing to speak out for his fellow employees, we feel management unfairly singled him out.”

“I never stop following up on complaints until they are resolved,” Johan told me, “and I am happy to say that each and every one of them over the years has been won. That’s because they aren’t fake; they are real concerns, based on our protected rights in the CBA [collective bargaining agreement].”

I asked Johan if he felt discouraged and I got an answer somewhat different than I expected and it may also surprise some who would find themselves in similar circumstances. “No, I do not feel let down, I feel high spirited,” Johan said, “ I know my co-workers support me, I know my union representative supports me and,” raising his voice a bit, “I know I have my union behind me.”

This confidence should not be dismissed as empty bravado. It is not fake, as Johan might say, it is real. And he is not alone. I often hear the same enthusiasm among Local 2 members.

Marc Norton has it and he is a sober veteran of numerous union and community struggles and “I have fought any number of fights that we didn’t win. However, the Hotel Frank campaign won’t be one of those.”

Local 2 undoubtedly has one of the better educated and inspired memberships that would make any union proud. Of course, it did not happen automatically. It is something that has been steadily built over the last 25 years as the union devoted more of its resources to education, on-the-job membership training and periodic mobilizations.

But it all begins with a clear explanation of union objectives and goals. This is crucial.

For example, this latest hotel battle began when contracts expired in August 2009. At that time, President Casey roused a membership convention of over 1000 by reassuring them that the union “will negotiate separately with each hotel if that’s the way they want it but we will do it as one union with one union standard. And our negotiators at each hotel will include committee leaders from a mix of other hotels so that our basic proposals remain the same for every hotel. One union, one contract!”

The room exploded in cheers! Workers understood how conditions in one hotel or even one city could not be maintained without the solidarity of thousands of other workers.

This is a winning strategy that speaks to the aspirations of each member regardless of where they work. Furthermore, union representatives consistently organize hotel committees of activists so that individual grievances have additional support among the total workforce.

In fact, much of Local 2’s success is owed to the fact that each individual hotel has a union committee.

Becoming a committee member starts with attending two union meetings, participating in two actions and taking responsibility for two assignments a union official explained to me. In other words, someone who consistently defends the union, helps enforce the contract and organizes other workers on the job.

With a strong and committed organization like Local 2 behind you, membership confidence grows. As confidence grows, so does participation and, ultimately, so do the results.

I see this energy expressed by hundreds of members on regularly-scheduled picket lines, by workers on lunch breaks collectively engaging in dramatic hotel lobby protests, by thousands voting 93% for strike authorization in July, by employees from ten different hotels promoting boycotts of their own hotels, by the recent overwhelming vote to fund the boycott campaign by an additional $1 million, by the membership decision to assess themselves an extra 50% monthly dues to supplement the strike fund, and by the union’s effective involvement of community, religious, labor and political supporters.

Though perhaps more developed in San Francisco, this membership involvement is spreading.

Over 50,000 UNITE-HERE hotel workers in ten cities are now working without a contract and, as a result, the national union has taken important and dramatic steps to coordinate actions against some of the major multi-national corporate owners such as the Hilton and Hyatt.

The December 16 actions in three cities were such an example. This strategy undoubtedly makes workers in each city feel more connected.

Maybe now we can better understand how Johan, Marc and the other 9,000 Local 2 members under siege by some of the world’s most powerful and profitable investment conglomerates can, at the same time, so confidently believe in themselves.

Carl Finamore is a delegate to the San Francisco Labor Council, AFL-CIO. He can be reached at local1781@yahoo.com and his writings viewed on Carl Finamore Commentary BLAHg or Facebook