With Focus on Obama, Local Ballot Measures Struggle for Attention 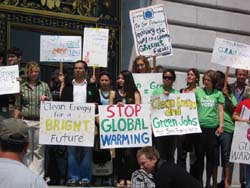 As I’ve written before, San Francisco has 22 local propositions in November—coming dangerously close to Supervisor Aaron Peskin’s pledge that “we will not go beyond Proposition Z.” Many are basic ‘house-cleaning’ amendments that wouldn’t generate much attention—regardless of what else was going on in that election. But others are more substantive, and were placed on this particular ballot for a reason: Barack Obama will bring out many progressive voters, creating a ‘coat-tail’ effect that could reshape San Francisco politics. Ironically, however, voters won’t be paying attention to most local measures—because the presidential race will hog the spotlight. Only two propositions are likely to generate buzz and whose outcomes are still in doubt: Proposition H (the SF Clean Energy Act) and Proposition V (opposing the School Board’s plan to phase-out JROTC.)

With voters fixated on the presidential election, it’s always a challenge to get people worked up about down-ballot races. This was particularly true four years ago, when many activists left town for a few weeks to campaign in the “swing states”—hoping desperately to drive out the Bush regime. We won’t see as many people travel this time around, but I’m also struck at how little attention San Francisco ballot measures are getting—although voters are asked to pick among 22 of them. Local activists have zeroed in on the Board of Supervisors races, as candidates are opening campaign offices and are getting their name out. But we’re not seeing much buzz on local propositions.

There are two notable exceptions. Because PG&E is throwing an ungodly amount of money to defeat Proposition H (which would mandate renewable energy levels for the City), we’ve already seen door-hangers popping up around town. Expect to see a lot of back-and-forth in this race, as the Bay Guardian and others make its passage a priority. A higher turnout in progressive precincts will certainly help, but don’t underestimate the amount of money PG&E will spend to sink it—along with Mayor Gavin Newsom’s opposition. This will be a long drawn-out street brawl that will be fought to the bitter end.

The other is Proposition V—a non-binding policy statement supporting the military’s JROTC program, and opposing the School Board’s move to phase it out. We’ve already seen big money being waged in its favor, and the campaign will enlist an army of high school students to be a field presence. And expect it to be a big soft-money conduit for moderate Supervisor candidates—especially in District 1, where targeted hit pieces that ostensibly advocate a “yes” vote on Prop V will attack “Eric Mar and the School Board” for getting rid of JROTC. Whatever its outcome, voters will certainly know about it.

But beyond these measures, I don’t believe we’re going to see much activity. I expected Newsom to campaign loudly against Proposition B—the Housing Charter Amendment—and his people have set up a campaign committee against it. But so far, the Mayor has spent more of his time attacking Prop H, opposing Proposition 8 (the anti-gay statewide amendment to ban marriage equality) and running for Governor. A big progressive turnout of Obama voters will help Prop B, and affordable housing groups are already out campaigning for it. But it may be a quieter campaign than most of us expected.

Then you have Proposition A—the bond to rebuild SF General Hospital—that everyone supports, and a solid campaign has been formed in its favor. Prop A needs a 2/3 majority to pass, which will probably happen. Supervisor Aaron Peskin’s revenue measures—Propositions N and Q—should also pass, but don’t expect many voters to remember. This is where SF Democratic Party and Bay Guardian slate cards will come in handy, as voters who know nothing about local measures will just check the boxes accordingly.

Two other local measures have generated buzz—but we already know what their outcome will be. Proposition K (which decriminalizes prostitution) has already given San Francisco national headlines, and fodder for columnists who like to embarrass progressives. But if Berkeley soundly defeated a similar measure in 2004, there’s no suspense around Prop K’s fate: it will go down in flames. We’ve also heard about Proposition L (Community Justice Center), but polling shows the program to be very popular—so it will likely pass.

It’s always hard to get voter attention around local measures—especially in presidential years. But many progressives aimed at placing ballot propositions in November—to anticipate a highly motivated base in the City who will vote for the Obama/Biden ticket. Some will be successful, by the sheer effect of most voters “checking the box” around progressive causes. On the other hand, as voters get their phonebook-sized ballot pamphlet in the mail, many of the 22 propositions won’t get much attention. And those who try to get voters to focus on them will be facing an uphill battle.