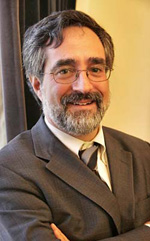 On February 24, San Francisco Democratic Party Chair Aaron Peskin filed a lawsuit against the city challenging its environmental review for projects connected to the America’s Cup. The Board of Supervisors will soon vote on the America’s Cup contracts, but Peskin’s suit under the California Environmental Quality Act, if successful, would enjoin further actions should the contracts be approved. Peskin got his start as an activist while a student at UC Santa Cruz when he challenged the environmental impacts of one of the school’s many expansions. After moving to San Francisco, he battled the establishment by suing to stop the North Beach parking garage. He also opposed widely supported plans to demolish the historic Colombo building as well as nearby apartments (I met him after he called me re the latter). Now, after becoming the quintessential insider who dined with Willie Brown and made the deals necessary to become head of the local Democratic Party, Peskin has lost his onetime political clout and returned to being a maverick.

Aaron Peskin’s lawsuit against the city is likely a first: if the head of the San Francisco Democratic Party has previously sued San Francisco over a major land use decision, that’s news to me. But Peskin has never been afraid to go against the grain in pursuit of his beliefs, and what’s noteworthy is that he felt he lacked the political support to achieve his goals and was left with filing a lawsuit.

From Potential Mayor to Political Maverick

With Mayor Ed Lee maintaining extremely high approval numbers since being appointed interim mayor, it’s easy to forget how the interim position could have gone to Peskin. Had he maintained his early endorsement of Malia Cohen in District 10 instead of co-endorsing and far more actively campaigning for Tony Kelly, and co-endorsed Jane Kim with Debra Walker instead of pouring Democratic Party money into defeating Kim, Peskin would likely have had the votes to be interim mayor (this assumes Kim and/or Cohen joining Avalos, Mirkarimi, Mar, Campos and Chiu).

Instead, Cohen and Kim’s victories spelled the end of Peskin’s mayoral hopes. But this did not mean that Peskin could not play an important role in the next mayoral administration.

Peskin did not sabotage that opportunity until he attacked both David Chiu and Ed Lee in early January 2011 as “lightweights.” Peskin also went after former dinner mate Willie Brown and former political ally Rose Pak, and accused his former Board colleagues of “being played by the super-rich.”

While Peskin’s depiction of a power-grab by the super-rich was popular in some quarters, the facts regarding the two key supervisor races that swung the mayoral appointment process say otherwise. I would bet that Malia Cohen’s voters had lower incomes than those backing Tony Kelly, and there may be no district where the “super-rich” has less impact than in the very low-income District 6 now represented by Jane Kim.

In a matter of weeks, Peskin destroyed political and personal relationships among Chinatown activists that he had spent over a decade building. His once powerful District 3 base was gone, and he was left with the same group of Telegraph Hill Dwellers and development opponents with whom he began his rise to political power.

Filing lawsuits does not require organizing among diverse constituencies or building political power. It is a clear sign that Peskin recognizes his political clout is so depleted that he could not count on six supervisors to hold up the America’s Cup agreement until his environmental concerns were met.

I first met Peskin when he asked for help in his effort to prevent the demolition of the Columbo building and nearby apartments known as the “Fong Building.” At the time he was alone in leading this fight, which was later taken up by other groups and both buildings secured (the Fong Building is now owned by a community land-trust).

I strongly supported Peskin in his race for Supervisor in 2000, when he was clearly the outsider candidate. I then watched as he used his political skills to build alliances with the Chinatown groups with whom he once shared a mutual distrust. Peskin went from attacking Willie Brown to dining with him, and he appreciated his relationship with Rose Pak and other Chinatown leaders.

Peskin reveled in his new insider status. He relished talking to the media, and thrived on the perception during the Newsom years that he was the “go to” guy if you wanted something done in the city. His election as head of the San Francisco Democratic Party brought a onetime consummate outsider to the most “insider” job of all, as he now headed the San Francisco Democratic “machine.”

But after the November 2010 elections denied him the Board support he needed to become mayor, Peskin started attacking the world he once sought inclusion in. He disparaged Board members over the mayoral selection process, and treated Ed Lee’s selection as some sort of personal betrayal. Had Peskin instead backed Lee once his appointment was certain, he would have positioned himself to further his agendas by working closely with the Mayor.

But Peskin preferred returning to his early role as a maverick outsider. He spent 2011 criticizing his former Chinatown allies, and did little to even attempt to build a citywide oppositional political base.

The Aaron Peskin who initially tried to work constructively with Mayor Newsom only to be rebuffed now seems satisfied to take shots at the far more collaborative Mayor Lee, with the America’s Cup lawsuit only the latest salvo.

Peskin has skills, knowledge and insights that could have helped move the city forward. It’s too bad he’s decided to instead play the maverick, a strictly oppositional role.