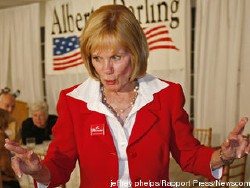 Every once in a while, Republicans get asked to define what is “rich” or “middle class” and are exposed for their hypocirsy. Back in 1996, Congressman Fred Heineman lost re-election because he said his $183,000 salary made him “lower middle-class.” Now, Alberta Darling – one of the six Wisconsin State Senators facing a recall challenge next week – is in the same company. Darling responded to a constituent who objected to her tax breaks for the wealthy, that a salary of $250,000 is “not wealthy” but instead “small business.” Of course, less than 1% of Wisconsin residents make over $250,000 – which shows just how out of touch she is. But while she won’t cut tax loopholes for those “not wealthy” people, Darling had no problem – as Co-Chair of the Joint Committee on Finance – slashing the salaries of public employees by seven percent, and taking away their rights to bargain collectively.

As Democrats like President Obama cave to right-wing extortion every day, some friends have asked me about why the Wisconsin recalls are so crucial – and whether we can truly trust the Democrats to stand up for working people, assuming they win back the State Senate. The answer is simple – politicians respond to fear. If we cost Republicans their majority in the Wisconsin State Senate, they will realize there are consequences to messing with the rights of working people – and it will embolden Democrats to stand up.

Alberta Darling seems to get that. As she told the Milwaukee Press Club recently, “she said the reason she’s being targeted is that her opponents believe that if they can oust her and the other GOP senators, others around the country will be afraid to make the same choices.”

That’s why the Koch Brothers are pouring resources into Wisconsin to defend right-wing extremists like Alberta Darling. They want to nip this uprising in the bud, before it spreads to other states – where power-hungry Republicans have also attacked workers. And that’s why it’s so crucial to call Wisconsin voters, send money to assist Democratic challengers, and help out any way you can.