Wisconsin Recall Results: Which Side Are You On? 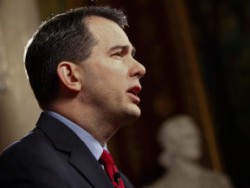 The results are in. Nearly half a year since labor went into revolt following Governor Scott Walker’s February announcement that he intended to bust Wisconsin’s public sector unions – prompting 14 Democrats to leave the state for a month in an attempt to block the legislation – voters went to the polls in six recall elections that unions and their supporters hoped would put the state senate in the hands of Democrats. Despite an absolutely obscene amount of money flowing into the state on behalf of Democrats and Republicans alike, the Cheddar Revolution fell one seat short of its goal. The state senate remains in the hands of the GOP for the time being while angry Wisconsinites set their sights on their primary target: Governor Scott Walker.

What should we make of these results? Why were the Democrats ultimately unsuccessful? John Nichols, an astute observer of Wisconsin state politics for many years, has been making the case that two seats, while disappointing and short of the total needed to take control, is actually a victory. After all, these districts were deliberately drawn to favor Republican incumbents in 2000. During the 2008 Obama landslide, all six of these districts elected Republican state senators, and in 2010 all six voted for Scott Walker. Wisconsin labor ought to take heart that two of the districts changed their minds about the GOP’s agenda. Nate Silver at 538 crunched the numbers and figures that if Walker were up for recall yesterday, he might have lost.

Additionally, Nichols notes that Sen. Dale Schultz, the lone Republican dissenter on the collective bargaining vote who represents a moderate to left-leaning district in southwestern Wisconsin, may find common cause with Democrats on other issues, occasionally giving Democrats the check on Walker’s power that they desired. Analyzing the recall results on Democracy Now!, Nichols ruled out the possibility that Schultz would consider switching parties or declaring independence, but it will certainly be easier for him to buck his party now that his vote is decisive.

Expectations gaming aside, the Democrats are at least as responsible for last night’s frustrating performance as gerrymandered Republican-friendly turf and underhanded voter suppression tactics are. Democrats expected to ride a tidal wave of anger back into power without speaking to the very issue that sparked Wisconsin’s political turmoil:

But most Democrats involved in recall elections have completely ignored the issue of reinstating collective bargaining, even though it is the unions who generated the activists going door-to-door to campaign for these candidates.

Mike Tate, chair of the Wisconsin state Democratic party, said in a press conference that only the media believe the elections are about collective bargaining.

As Jack Carver, on the Isthmus‘ Daily Page, wrote: “Democrats tacitly play into [Walker’s] game. Instead of articulating how unions benefit the general population, they speak in the vaguest terms about the importance of preserving the rights of public workers.”

While conventional wisdom dictates that it was good politics to de-emphasize collective bargaining, Democrats missed a crucial opportunity to change the terms of the public debate on organized labor. Walker and the GOP spent weeks demonizing public workers and the unions that represent them, and instead of hitting back on behalf of the very same people who worked tirelessly to help them seize the senate, the Democrats decided to accept the Republican’s terms. Even if Democrats eventually take both houses and the governor’s office, can labor really count on them to restore their rights?

Before the election, union-organizer-turned-journalist Josh Eidelson suggested that the Democrats were embracing a class-based populist message, and that the recalls would provide a test case for this strategy going forward. He notes that Democrats often “dabble in populism” without actually embracing it once elected, but seems to think that something is different this time; the Democrats may have had a genuine change of heart when it comes to speaking in stark terms of rich vs. poor or worker vs. boss. From my vantage point, it looks like they’re still dabbling. Their rhetoric is missing the fire and militancy of a genuine worker’s party, which ought to speak in terms of protests, occupations, and strikes and help workers understand and articulate an alternative vision of economic justice rather than emphasizing elections and accepting the terms of corporate capitalism as the limit of its vision. The Democrats channelled the movement’s best energies into electoral politics with the aim of increasing their own power. By abandoning the collective bargaining issue, the Democrats showed their true colors and proved once again that the Democratic Party exists solely to elect Democrats.

In retrospect, perhaps funneling all of that time, money and energy into the recalls was a mistake. The Democratic Party can certainly spin it as a victory and enhance its own political power, but it was working people, union and non-union alike, who occupied the Capitol for weeks and prompted the 14 Democrats to leave the state. Tens of thousands of people in the streets of Madison sent a message to the elite, Democrat and Republican alike, that they could not ignore. The protest movement, with spontaneous acts of civil disobedience, mass rallies, and a militant posture, genuinely empowered workers to take matters into their own hands. The Democratic Party co-opted that energy to serve its own political ends and did more to demobilize the protest movement than any Republican could have hoped for. But are their ends the same as ours?

This piece was first published at Andrew Cole’s blog.