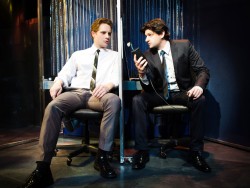 When I wrote for California Voice, The Original Sentinel Newspaper, City Magazine and the Sun Reporter, I kept the items in the short Three Dot Journalism style. Many of you have written that you miss the old Three Dots and a Dash. It’s a fast read. And hey … it worked for Herb Caen … So for old memories … its back.

WIREHEAD AT THE SF PLAYHOUSE is a knockout that pulsates with the thrill of discovery. Audacious and top drawer actors Scott Coopwood … Craig Marker … Gabriel Marin … Madeline H.D. Brown … Lauren Grace … and Cole Alexander Smith find new ways to make your hair stand on end and … sizzle your brain at the same time. Yep … it’s a brave new world.

The .98-minute play by Benjamin/Brown is brilliant. The time: Soon … The Place: America. The effect: Scary! You see … their brains have been wired to keep up the corporate workload. They don’t even need phones … the workers just twist a finger in their ear to turn the phone on or off. So much better than carrying a cell phone. Susi Damilano is A Tour De Force of Masterful Directing … A Groundbreaking JOLT of Genius. I might even say “Superb” … oh I just did. Keep you eye on the men’s shoes in this play. They all wear oversized shoes. And … you know what that implies … don’t you? Dot … Dot … Dot. Oh yes — Bill English has designed another amazing set. Now playing at the San Francisco Playhouse … on Sutter Street near Powell.

OVER AT THE CUTTING BALL THEATRE … the everyday becomes extraordinary. Storytelling is their specialty … and Playwright Will Eno seems to be the Patron Saint. Out of the three acts — “The intermission” (that’s the name of the play) … is the best of the three. We in our seats are looking at an audience who is looking at us … like we ARE the play. Yes, they are sitting in theatre seats.

The play has just ended – and during the intermission they talk about the play to each other. Oddly enough … the players have better chairs than we did. They actually have armrests. The talk from the four in the audience sitting on the stage — goes from being pompous … to pretension.

It’s a parody of course. But … you do get the feeling that they are somehow mocking us. Very interesting also is “Mr. Theatre” … he’s a man that rants and raves in a frightening way. Is Mr. Theatre … joking or is he on the edge of insanity? I would say both! My least favorite of the three would be … ”Lady Grey”. Well it might be a good monologue … but … she mumbles so under her breath, that you can’t catch most of the lines.

I think what is lost here is the lack of impact. It’s an intimate space … but the actress hardly spoke loudly enough for anyone to really get it. The plot of Lady Grey is about Lost Love … and they might add — lost words. The play is cleverly assembled by Rob Melrose. The splendid actors are … David Sinaiko, Gwyneth Richards, Galen Murphy-Hoffman and Danielle O’Hare. At The Cutting Ball Theatre … (Exit – on Taylor).

ABSOLUTELY SAN FRANCISCO will get the Tourists. This new musical by Anne Doherty is homage to San Francisco’s quirky ways. There is “Sunshine” – a 60’s homeless woman. She lives under the Cupid Arrow on the Embarcadero. And … she hears voices … most notably coming from Sutro Tower. There is the typical Cable Car Conductor, a Chinese shopkeeper a gay wine merchant and an Indian engineer plus an eccentric hippie billionaire. Now that’s a typical mix of SF personalities … most you have seen around town. Just take a walk down Market Street.

The set is quite amazing with the use of Rear and front projection screens. We see the Cable Cars running up and down Powell Street and other City Landmarks. When I first arrived in the City … I was asked to be in a play that revolved around the Cable Cars … I was the Conductor. The costume made me look like a Chekhovian Freedom fighter. My job … was to shout out the stops and make some inane jokes. It was so bad … that we had to beg the audience to stay.

This show (ABSF) is much better … after all … we get the astonishing talents of Darlene Popovic, who carries the entire show. As Sunshine and other characters she sings … she’s a tour guide … she’s homeless … she cares about people and always listens to ‘Coit Tower’. Now if that isn’t eccentric enough for you, then nothing is. I think I’ve seen her around U.N. Plaza with her shopping cart filled with junk.

This is a fun crazy show … but one that tourists will just relish. Not only does the show give you tips on what to see … it will be something that tourists can take back to their hometown. The musical review with songs like “I’ve Always Loved You” … and the touching “Home” will be something that they can take home with them. To make it even more fun … I would like to see them use the instruments on the stage instead of the recorded tracks. It would add a lot!

There are some interesting perks for tickets purchases: If you buy two tickets … you may get a bag of goodies that include passes to other events around town. Also … in the bag there is a bottle of fine wine … chocolates and other memories of San Francisco. At the Alcove Theatre on Mason Street (between Geary and Post St.) You can get additional info at: http://www.notquiteopera.org/. Absolutely San Francisco is VERY SF.

LOUISE PITRE AT THE RRAZZ ROOM

GOING TO THE RRAZZ ROOM IS LIKE GOING ON AN AMAZING CRUISE SHIP RIDE … and I have rarely been disappointed. The talent at the Rrazz … NEVER fails to get an enthusiastic audience. Just the other day … I went to hear Louise Pitre … who has appeared in Les Miz, Mama Mia and several other Broadway shows. Pitre spent a lot of time on the Orpheum stage in Mama Mia – and to hear her sing at the Rrazz fantastic treat. Her big and brash … “The Winner Takes it All” from Mama Mia was just dazzling. Pitre sings a lot of Piaf songs … some in French and some in English. She frequently says the words of the French songs in English so that we — who don’t know French language … know what the story is about. After All … all songs are short stories.

Pitre has tremendous heart, especially with songs like the stirring “Non, Je Ne Regrette Rien”. You won’t easily conquer her. She keeps a good balance of music … especially with the amusing “One Hundred Ways to Leave a Man.” Not sure that is really the title – but that’s the story of the song. “I Love songs about despair and breaking up” … she says. Pitre also said: “I hope before I’m too old to sing “Some People” on the stage in the musical “Gypsy”. Here’s Buzzins’ take: “She would be perfect!” Looking forward to seeing her again at the Rrazz Room … she’s one of the best this year!

THREE DOTS AND MAYBE A DASH

Liz Taylor. I interviewed her in the 80’s at the Sir Francis Drake Hotel. Took many pictures of her – which I have now lost. She said to me “You’re so cute.” Remember … this was in the 80’s – I might have been cute then.

Simon Cowell spoke: In London, where he told ‘Extra’ he wished he had met screen legend Elizabeth Taylor. “I was literally only a week ago talking to someone about who we would like to meet, and I said Elizabeth Taylor” – Cowell said. “Everyone who met her said she’s an absolute star. They just don’t make them like her anymore. She’s everything I used to love about old ‘Hollywood’ … the epitome of a star.” And Buzzin’ might add – “She was down to earth. Not pretentious.”

Las Vegas superstar Celine Dion … packing them in again in her tribute to Michael Jackson. Still looking in the height of fashion.

Didn’t know. Some people were shocked and outraged by Victoria Jackson’s recent tirade against the TV show “Glee”. Some say that she has been clawing her way onto the TV here and there. What do you think? Dash, Dash Dash.

AND THAT’S THREE DOTS AND A DASH FOR TODAY