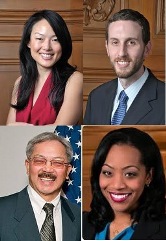 The Board of Supervisors’ 8-3 vote in favor of the “Big Tent” legislative approach to condo conversions left winners and losers in its wake. The biggest winners are TIC owners who can now bypass the condo lottery, and tenants living in small buildings who face reduced eviction threats from speculators. Mayor Lee comes out a big winner for getting $20 million for his reinvention of public housing, and newly seated Supervisor Norman Yee proved he could hit the ground running by playing a critical role in revising the original Wiener-Farrell proposal. Real estate speculators organized as “Plan C” were the biggest losers, having urged the Board to kill legislation that would enable over 2000 TIC owners—the group Plan C has long claimed to represent– to convert to condos. Here are other winners and losers in a struggle that left the San Francisco Chronicle completely confused, as it reported “thousands of San Franciscans could become first-time homeowners” when in fact TIC owners already are “homeowners,” not tenants.

Suspense and intrigue preceded the June 11 Supervisors vote on condo-conversion legislation, though much of the uncertainty was unfounded. For example, Supervisor Malia Cohen was never going to vote against a bill that will bring as much as $10 million in public housing funds for her district. Cohen has prioritized bringing jobs and resources into District 10’s low-income neighborhoods, and rumors that she would side with Plan C against public housing tenants were erroneous.

Also unfounded were reports that Mayor Lee would veto the condo legislation. Despite staying on the public sidelines in this long struggle, the mayor made sure the legislation was structured to get eight votes and to give him a projected $20 million (and potentially more) that his plan to reinvent public housing desperately needs.

The biggest winners are the estimated 2000 TIC owners who can bypass the condo lottery and now convert. This legislation increases their property values, and many worked for years to win this lottery bypass.

Supervisor Norman Yee is also a big winner. Soon after taking office, Yee had to respond to the original Wiener-Farrell condo legislation. This legislation was being falsely sold as addressing a non-existent TIC foreclosure crisis, but newcomer Yee was not fooled. Yee proved his ability to tenants and TIC owners alike and comes out of the condo battle a proven warrior less than six months into his term.

As noted above, Malia Cohen is a big winner for securing millions of desperately needed public housing funds for her district. Mayor Lee pushed the popular idea of directing condo conversion fee payments to the broadly backed public housing cause, and will soon have $20 million dollars more to fulfill his ambitious plans.

The city’s tenant movement is a big winner for coming off the canvas to turn a potential disaster into a victory. Like many before him, Supervisor Wiener underestimated tenant power. He misread the November 2012 election results, believing tenants were too weak to prevent his gutting of the three decade old condo conversion law.

I’ve been involved with San Francisco tenant legislative campaigns for over thirty years, and the strategic savvy, racial and ethnic diversity, and grassroots strength of tenant activists has rarely been better demonstrated. This legislation will not stop all Ellis evictions or slow steadily rising rents, but by reducing incentives for future evictions by imposing a decade long moratorium on new conversions, it was the best result possible under the circumstances.

Supervisors Avalos, Campos and Mar are now in their second terms as reliable tenant votes. They stood by tenants from the darkest times back in February through the June victory.

I questioned David Chiu’s commitment to fighting for the tenant cause early in the legislative process, but he stayed the course and his legislative expertise boosted the tenants’ cause.

Jane Kim was also solidly in the tenant camp from the start, and used her position on the Land Use Committee to help tenants turn the tide. Kim’s disposing of opposition arguments in her comments prior to the Board vote was widely hailed by tenant advocates. As much as many of us miss Kim’s Budget Committee expertise, tenants were fortunate over the past months that she was serving on Land Use.

London Breed avoided what would have been a very controversial “No” vote, and also brought home millions in condo conversion fees for public housing tenants in her district. Breed long appeared aligned with speculator interests, but when push came to shove she cast the vote that her constituents overwhelmingly supported.

Scott Wiener would be in my winners’ column had he not engaged in parliamentary tactics in the past week that alienated many of his colleagues. Wiener’s relationships with fellow supervisors was already strained over other matters, and his tactics in getting his version of the condo law out of Land Use and to the full Board have increased his colleagues’ distrust. While Wiener ultimately voted against a bill he initiated, he can and will tell TIC owners that he started the process that finally led to their bypassing the lottery.

Plan C and the real estate speculation wing of the Board of Realtors lost big from the 8-3 vote. They not only failed to keep London Breed on their side, but their poor advocacy efforts turned a likely victory into a defeat.

Plan C lost big because the group was exposed as using the cause of TIC owners as a front for their own profiteering from speculative evictions. The group opposed legislation helping the very TIC owners whose interests they claimed to represent. Meanwhile, the legislation backed by tenant groups—who Plan C has accused of opposing homeowners—enabled an estimated 2000 TIC owners to bypass the lottery.