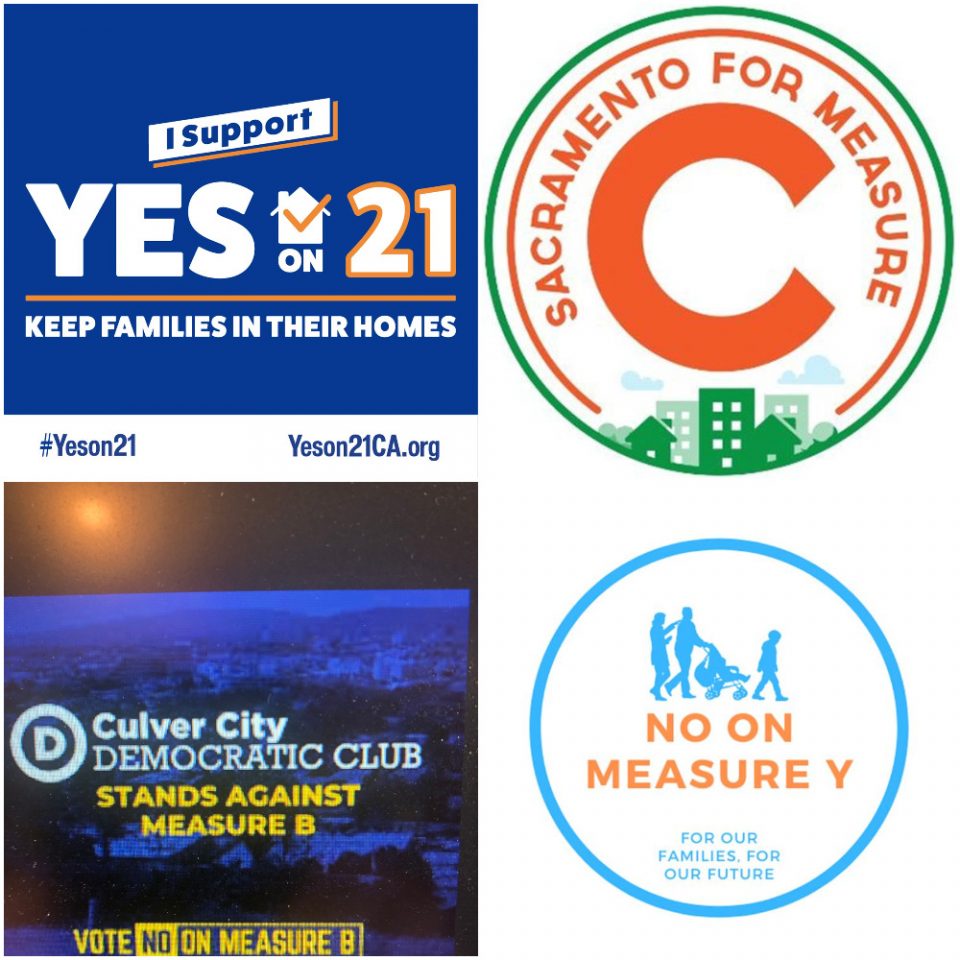 California voters will decide one state measure (Prop 21) and several local ones impacting the state’s  affordability crisis. There are initiatives that strengthen or repeal rent control laws, raise real estate transfer taxes, increase funding for affordable housing and open up cities to new apartments. Here’s our assessment of their prospects.

I strongly support Prop 21. I am disappointed but not surprised that recent polls have it heading for a crushing defeat. Prop 21 repeals some of the worst portions of the 1995 Costa-Hawkins Act, particularly the state preemption of local laws imposing rent control on vacant apartments (vacancy control).

As I describe in Generation Priced Out, Costa-Hawkins has worsened the state’s affordability. It deprives cities of a critical tool to reduce skyrocketing rents. Landlord claims that Costa-Hawkins would increase affordability and housing production have been completely disproved. Instead, as tenant advocates predicted when it passed, all Costa-Hawkins has done is incentivize no-fault evictions and boost landlord profits.

Costa-Hawkins worsens California’s housing crisis. It should be repealed. But it was never going to happen with Prop 21.

Rent control only wins when grassroots activism outdoes big money opposition. Winning statewide in California requires keeping margins close among voters who do not live in high housing cost cities. That requires paying fulltime organizers to go out to those areas.

The AIDS Healthcare Foundation (AHF), backer of Prop 21, has this funding. It has already spent over $40 million to pass Prop 21 (opponents have spent over $80 million). But where has that money gone? To slate cards and advertising rather than the on the ground organizers that even during a pandemic can make a big difference.

Prop 21 has also led me to add a new rule to my Five Rules for Successful Ballot Initiatives that I discuss in The Activist’s Handbook. I will call it the Weinstein Rule, named after AHF leader, Michael Weinstein. The Weinstein Rule is that if you are planning on winning a ballot measure you don’t spend that year and the preceding years alienating allies you need to win. Weinstein’s vicious attacks on his political opponents and extreme anti-development agenda have turned potential supporters into hardened enemies (this is a guy who even got into legal fight in 2019 with the beloved Amoeba Music).

Virtually all of the progressive and labor activism in California is going toward passing Prop 15 and defeating Prop 22. These are the type of grassroots campaigns that Prop 21 needed to win.

Weinstein and AHF have too much baggage to win a state campaign. Better for their money to back a true labor/tenant led grassroots campaign to reform Costa-Hawkins that they do not control; few believe they would allow this to happen.

Sacramento’s Measure C seeks to strengthen the city’s weak rent control law. This is an essential measure to preserve the city’s historic affordability, which is now at risk as workers leave the Bay Area for homes they can afford (prior to the pandemic 120,000 drivers were commuting from Sacramento to the Bay Area).

Will Measure C pass? Mayor Steinberg and the City Council have lined up against it, and the No on C forces are greatly outspending the Yes side. But recent Sacramento elections have seen grassroots activists prevail over establishment interests. Don’t bet against this happening again.

Culver City’s Measure B would repeal the city’s rent control protections. It’s chief backer is a big Trump supporter, which doesn’t play well in a city that backed Clinton over Trump in 2016 by a 5.6-1 margin. Culver City is building one of the state’s most powerful local progressive movements—I see Measure B losing big.

Culver City, like San Francisco, is seeking to increase its real estate transfer tax. It’s Measure RE only applies to transactions over $1.5 million and is projected to raise $6 million a year. San Francisco’s Prop I raises taxes on deals starting at $10 million, and is estimated on generating an estimated $196 million per year.

This seems like the perfect political climate to raise taxes on what most voters will perceive as wealthy property owners (San Francisco would not raise transfer taxes over only $1.5 million because that’s less than the median price of a home).

Defeating these measures requires convincing voters that they are personally negatively impacted and/or that raising transfer taxes will stop housing construction or otherwise hurt the city. The No on I campaign in San Francisco has spent over $5 million, an extraordinary spending differential over proponents. We’ll soon learn if this massive spending succeeded. I think it fails. I see both transfer taxes passing (San Francisco’s transfer tax hike would fund  a companion measure, Prop K, which promotes “social housing.” Prop K is certain to pass).

California cities have had great recent success in passing housing bonds. In Generation Priced Out I urge cities to create local affordable housing funding streams and San Diego’s $900 million housing bond is the type of bold action to be applauded. The measure funds an estimate 7,500 subsidized apartments. It has such broad support that even the San Diego County Taxpayers Association has endorsed it.

But strong support for housing bonds doesn’t automatically translate into a 2/3 yes vote. An August poll found Prop A leading only 36-32%.

The housing bond was initially planned for the November 2018 ballot, but “supporters decided to hold it for 2020 to avoid having to compete with another tax measure.” This made sense, also because the larger presidential year turnout would help passage.

But the pandemic changed the political climate. Even though the bond’s tax impact on a $600,000 home is less than $20 annually—a mere pittance—the current economic crisis makes homeowners more susceptible to scare tactics about tax hikes (the tax does rise to over $100 annually over time but this is still less than a dinner out for San Diego homeowners).

Activists can sometimes do everything right but still not win. Prop A may become an example. If it does fail San Diego activists might consider raising affordable housing funding via a petition drive so that only majority approval rather than 2/3 is required.

The city of Alameda, bordering multi-racial Oakland, bans the construction of new apartment buildings. Its charter (Article 26) also limits citywide housing density to one housing unit per 2,000 square feet. As the Greenbelt Alliance puts it, “Article 26 is a relic of racist land-use and discriminatory housing policies that have denied the dream of homeownership to families who deserved better.”

In 1991 the Silicon Valley city of San Mateo passed a measure imposing a strict height and density rule of 55 feet tall and 50 dwelling units per acre on every parcel in San Mateo, including areas adjacent to the three Caltrain stations. It was renewed in 2005 and would be renewed again this year as Measure Y.

But the price of housing has increased dramatically in San Mateo. A broad coalition is now battling to end thirty years of anti-housing policies. Measure Y and its predecessors have prevented affordable housing from being built in the city. These measures have also encouraged private developers to build larger, luxury units due to the limits on the number of housing units per parcel.

According to Habitat for Humanity Greater San Francisco CEO Maureen Sedonaen, “A no vote will take away some of the most serious obstacles to building homes for working families while also concentrating higher heights and densities near public transit where they cause the least community impact. Habitat is proud to be part of a coalition of affordable housing advocates, civic leaders, labor unions, small businesses and neighborhood associations campaigning for a vote against this measure.”

Like Alameda, San Mateo has a chance to reverse decades of elitist, racist and climate destructive housing policies. The eyes of the nation are on San Mateo to do the right thing.

Don’t miss our predictions on national, California and local ballot measures in our Monday, November 2 edition.