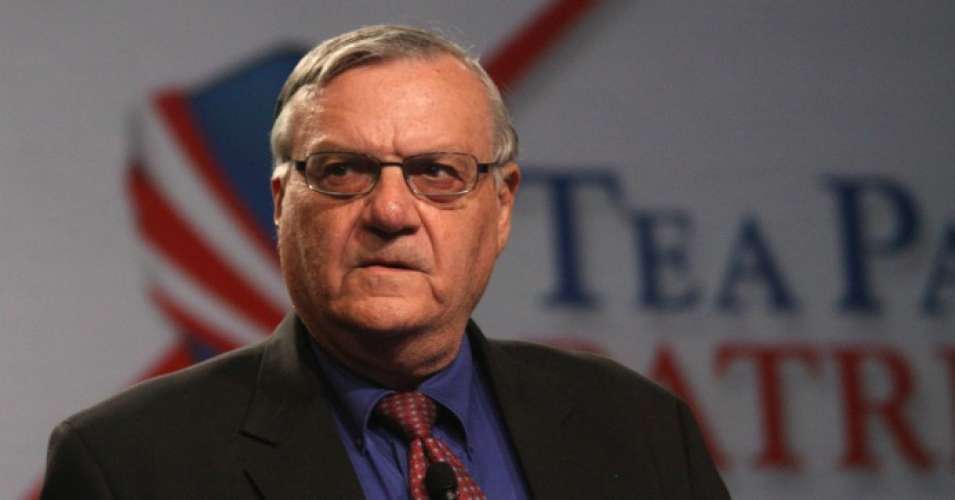 “Trump pardoning Arpaio would be an official presidential endorsement of racism,” says the ACLU.

The people of Phoenix, Arizona are mobilizing ahead of President Donald Trump’s visit to the city on Tuesday—a week after he defended white supremacists—amid speculation over whether he will announce at the rally a presidential pardon for Joe Arpaio, the notorious former sheriff of Maricopa County.

Thousands are expected to show up to protest the president’s visit, with a number of events planned including the Puente-organized “White Supremacy Will Not Be Pardoned” evening rally. The local human rights group said on its Facebook page: “we want to send a very clear message that we will not pardon white supremacy the way [Trump] has done so with #Charlottesville and now with Joe #Arpaio.”

Trump told Fox News last week that he is “seriously considering a pardon” for 85-year-old Arpaio, who was convicted last month by a federal judge of criminal contempt for violating a 2011 court order requiring him to stop racially profiling Latinos with traffic stops and detentions.

Among the other acts of his reign as sheriff that garnered widespread criticism from civil rights advocates was establishing the Tent City jail, where, as the Washington Post explained,

‘America’s toughest sheriff’ forced his inmates to wear pink underwear, shower with pink towels, and sleep on pink sheets. Their meals were meatless and their jumpsuits striped in wide black and white. The only barrier between their bodies and the scorching summer sun was the weathered green canvas of surplus Korean War military tents.

Trump, however, declared Sunday that Arpaio is “a great American patriot” who “has done a lot in the fight against illegal immigration.”

But according to the ACLU, if Trump pardons Arpaio it would be “an official presidential endorsement of racism.”

In a petition that describes Arpaio “a criminal,” the ACLU is urging supporters to call on the White House reject the possibility of a pardon.

“As Sheriff of Maricopa County, Arizona, Arpaio and his deputies systematically terrorized communities of color with unlawful detentions,” the petition reads. It continues:

Federal prosecutors secured a criminal contempt conviction against Arpaio after it was proven his office profiled and illegally detained Latinos, violating their constitutional rights.

A pardon by Trump would absolve Arpaio’s flagrant violation of federal court orders and his racism and bigotry.

A group of Arizona Democrats—Reps. Ruben Gallego, Raul Grijalva, and Tom O’Hallera—wrote to Trump to warn that a pardon would send a “clear message that your allies are immune from prosecution.”

“I absolutely think it’s inappropriate to be holding a political rally a few days after an innocent woman was mowed down by a neo-Nazi,” said Gallego. “It’s throwing tinder onto an ongoing fire.”

Phoenix Mayor Greg Stanton similarly cautioned against a pardon and further urged Trump not come to Phoenix at all.

He said last week: “I am disappointed that President Trump has chosen to hold a campaign rally as our nation is still healing from the tragic events in Charlottesville. If President Trump is coming to Phoenix to announce a pardon for former Sheriff Joe Arpaio, then it will be clear that his true intent is to enflame emotions and further divide our nation.”

According to Rep. Michelle Lujan Grisham (D-N.M.),chair of the Congressional Hispanic Caucus Chair, issuing Arpaio a pardon “would signal that Trump’s allies are above the law, affirm that anti-immigrant bigotry will be rewarded by the Trump administration, and make clear that the President condones Arpaio’s shameful record of racism and reckless policing.”

“Unfortunately, through the deportation of parents and breadwinners,” she added, “it has already become clear that President Trump is seeking to nationalize Arpaio’s indiscriminate and unconstitutional approach to immigration enforcement.”

Arpaio, for his part, said last week that he’d be “honored ” to receive a pardon from Trump.

“It makes me feel good that at least someone is backing me up. And how much better can you get than President of the United States?” Arpaio said. “This president understands what I’ve been going through. I’ll tell you one thing he’s got guts and courage and that’s what this country needs.”

Yet “[e]ven without an announcement of a pardon,” the New York Times reports, “the visit could roil grievances and rallying cries after a week of protests in major cities across the United States.”