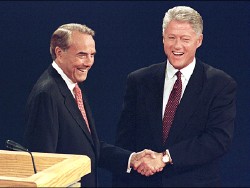 With right-wing ideologues in Congress hell-bent on a federal government shutdown, it’s looking like 1995 all over again. Which raises the question, will the 2012 election be a repeat of 1996? If so, progressives are in deep trouble – and it’s our job to stand up to this President and demand history not repeat itself. Like Bill Clinton, Barack Obama will win re-election handily – as polls show the crop of Republican candidates far outside the mainstream. But like Clinton, Obama has repeatedly snubbed his progressive base – and continues to disillusion Democratic voters. While 2012 should be a repudiation of the 2010 election, we could see – like 1996 – Republicans keeping the House (and even taking the Senate), because a triangulating President co-opted a right-wing agenda to save his own hide. And in a must-read article for The Nation, Obama’s choice for re-election campaign manager – Jim Messina – only confirms the worst fears we should have about 2012.

1996 was a very formative year for me personally. In March, I turned 18 years old. In May, I had my first political campaign experience. In September, I became a naturalized U.S. citizen. And in November, I voted for the very first time. But it was also the year Bill Clinton signed the Defense of Marriage Act, the Telecommunications Act, the Freedom to Farm Act, a harsh Immigration Bill, the Helms-Burton Act and – of course – Welfare Repeal. By the time I finally got the chance to vote, I felt like a total chump for supporting Bill Clinton. The guy gave me absolutely nothing to hope for.

I was not alone. At the Democratic National Convention (a mere week after Clinton signed the Welfare Bill), Tom Hayden was left mumbling on PBS that progressives would just have to “submerge” their frustration with the President until after the election. The alternative news site Common Dreams was launched in early 1997, because its founders said progressives had felt “robbed” by the 1996 election. In fact, the only presidential candidate that year who even pretended to care about working-class Americans in this economy was … Pat Buchanan.

And now, I’m afraid the same thing could happen all over again. Bill Clinton sealed his re-election when Republicans shut down the federal government, but he never used that political capital to help Democrats win back Congress. By co-opting Republican pieces of legislation and leaving his Democratic colleagues out in the cold, he gave the House Republicans tangible legislative proposals that they could go back to their home districts – and argue they were not a “do-nothing” bunch of right-wing ideologues. In the end, Republicans not only kept the House – but actually picked up two seats in the Senate.

Even if Obama comes out of a looming federal shutdown looking good, do you honestly expect him to help Democrats re-take Congress? The guy wouldn’t even go to Wisconsin to rally against Scott Walker’s attempt to annihilate state workers. And just like in 2010, we won’t see the same energy like we saw back in 2008.

But there’s no reason why it has to be this way. For starters, Bill Clinton – unlike Obama – was never a progressive. Democrats were so tired of being in the political wilderness after 12 years of Reagan-Bush, they were willing to support a Southern moderate who flew back to Arkansas in the middle of the campaign to execute a mentally retarded man. It was disheartening, but not surprising, to see him sell out progressives later – because in the end, Bill Clinton just wanted to be President. Obama, on the other hand, took on the Clinton dynasty to win the nomination. His background as a community organizer, and his very progressive campaign about engaging the grassroots, signaled a genuine change.

More importantly, though, America is far more progressive than 16 years ago. While 2010 was a Republican rout like 1994, Democrats kept the Senate – and what the election proved more than anything is how much Tea Party extremists have taken over the GOP nomination process. In the eyes of Middle America, however, Republicans are clearly out of step with the mainstream. Democrats lost because of a huge “enthusiasm gap” from 2008 – a gap that Obama and the Democrats have done nothing at all to address.

So how are we more progressive today? Demographics. Latinos (who vote Democratic) are the fastest growing ethnic group, there’s a rise of the secular “creative class” among white suburban voters and we have a younger electorate. As Chris Bowers has persuasively written, Michael Dukakis would have won the 2008 race on demographics alone – and, when you factor in demographics, was a stronger candidate than John Kerry.

In other words, there is no inherent reason why history has to repeat itself again.

But what about the myth that we are a “center-right” country? Political pundits who say that are confusing the nation’s electorate with political discourse in Washington. Without a doubt, Beltway politics has a “center-right” bias – because driving the discussion that way benefits the rich and powerful. Which is why you see Keith Olbermann get fired, while buffoons like Glenn Beck and Sean Hannity still get their shows on Fox News.

Nowhere was this more obvious than the public option fight on health care reform – where polls showed it popular (even in Blue Dog districts), but we were told that Democrats in Congress “don’t have the votes.” We saw that again in December 2010, when Obama admitted the American people don’t want to keep Bush tax cuts for the wealthy – but the Republican minority in the U.S. Senate wouldn’t budge. It didn’t matter that Washington DC was clearly out of touch with America. We were going to let conservatives win anyway.

But Obama – and most Democrats in Washington – haven’t learned from this. They are too cowed into submission, too afraid from what happened in the 1990’s, that they still believe we are a “center-right” nation – assuming, of course, that they even want to push a more progressive politics. And as the President mobilizes for his re-election in 2012, he has appointed a truly awful person as his campaign manager – Jim Messina.

In a must-read article for The Nation, Ari Berman breaks down who is Jim Messina. He was Rahm Emanuel’s deputy, who chastised the Campaign for America’s Future efforts to “dog the Blue Dogs” on health care reform – threatening them with a loss of access if they didn’t back off. “We know how to handle the Blue Dogs better than you do,” said Messina. The guy has open contempt for outside lobbying activities that empower the Democratic base – although that goes against everything Obama’s campaign was about.

Make no mistake about it – what Obama accomplished in 2008 by unseating Democratic heir apparent Hillary Clinton was remarkable, because the establishment “always wins” in primaries. And it could never have been accomplished without the movement power of his supporters – or the reforms that Howard Dean had put in place at the Democratic National Committee. “[Messina] is not of the Obama movement,” Berman quotes a top Democratic strategist. “There is not a bone in his body that speaks to or comprehends the idea of a movement and that grassroots energy. To me, that’s bothersome.”

Oh, and he was a long-time aide to Montana Senator Max Baucus – who bungled health care reform by arresting single-payer advocates and kowtowing to private insurance (while Messina shielded all public pressure on Baucus from advocates.)

So how will Messina engineer Obama’s re-election? By placing the President “above the fray” in our partisan battles – painting Republicans as the right-wing extremists that they are. But that will do nothing to help Democrats re-gain Congress, because it triangulates against the base. With the 2012 Democratic National Convention in anti-union Charlotte, North Carolina, it’s further proof that the Obama re-election campaign is more interested in chasing conservative voters in the South – than reaching swing voters out in the West.

Would Obama’s re-election be a good thing for the country? Just like it was preferable for Bill Clinton and not Bob Dole to win in 1996, the answer is “yes.” But it will do nothing for progressive change – and further demoralize us after Obama’s promise.

Those words are even more prescient today.

EDITOR’S NOTE: Paul Hogarth is currently on vacation, and has a reservation to the Grand Canyon from April 12-14. Unless there is progress in budget talks, the federal government will shut down on April 8th – which would close all national parks.