Will SNA Chart a New Course? 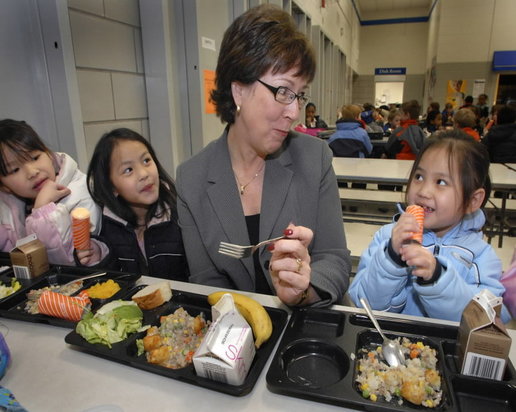 Meet Jean Ronnei, whose position as incoming President of the School Nutrition Association (SNA) puts her in a tough spot. She must tread a fine line between the interests of America’s “lunch ladies” and the children they serve, and the interests of the processed food companies that sell their wares to school cafeterias and provide about half of SNA’s operating budget.

The 55,000 member organization of school food professionals has come under fire during the past couple of years for demanding rollbacks to new federal rules mandating healthier meals for students. Critics say the group’s ties to processed food manufacturers tarnish its reputation, and raise questions about whose interests they really represent.

As President, will Ronnei continue to prioritize the needs of SNA’s Big Food sponsors, or will she once again put kids’ health at the top of the organization’s agenda?

Jean Ronnei is already well known to those who follow school food news. Her St. Paul (MN) school district has long been a leader in serving healthy food to kids, and has often been cited as an example that other school districts should emulate.

She has been lauded for her involvement in Farm to School efforts, and for her outreach to St. Paul’s immigrant families, to help them feel comfortable with the food served in her schools. She has even used recipes, like Hmong beef fried rice, suggested by parents of her students. “The kids love that their moms helped to create the dishes,” Ronnei told USA Today.

In 2012, Ronnei won the grand prize in the Physicians Committee for Responsible Medicine’s “Golden Carrot Awards” that honor schools “doing an exceptional job of improving the healthfulness of school lunches” with a particular emphasis on encouraging students to eat lots of fresh fruits and vegetables, according to the PCRM website.

Ronnei attracted national attention as an early adopter of the 2010 Healthy Hunger Free Kids Act (HHFKA) nutrition standards that have been rolling out in schools since 2012. By 2013, her school meal program was already meeting HHFKA sodium reduction targets that would not kick in until 2015.

She’s been ahead of the curve on whole grains, too. St. Paul Public Schools began searching for a 51% whole grain (called “whole grain rich”) sandwich roll as long ago as 2009, achieving success by 2011. Schools were not required to serve exclusively “whole grain rich” products until 2014.

In 2013, Ronnei conducted a taste testing for students of two different focaccias – one made with refined white flour, the other “baked in district ovens from a new recipe that uses heart-healthy whole grain flour that looks as white, fluffy, and familiar as Wonder Bread.” As Pro Bono Press further reported:

“The notion that kids will reject healthy food is commonly held, often by parents as we’re trying to rationalize another trip to a McDonalds drive-thru. But Ronnei, who was recently named food service director of the year by the School Nutrition Association, believes that kids could develop a taste for what’s good for them if we regularly put good stuff in front of them. ‘They like green beans—I’ve seen it myself,’ she says. As if to demonstrate her point, two girls sitting at the next table sniff suspiciously at the focaccia before taking tentative bites from each piece. After a couple of mouthfuls, the wrinkles in their noses smooth out.

All of which makes Ronnei an eyebrow-raising choice to assume the leadership of an organization that includes in its 2015 Position Paper the demand that Congress roll back many of the nutrition standards of the 2010 HHFKA, in particular seeking to block implementation of any further sodium reduction, as well as gutting requirements that every student take a fruit or vegetable with their meal, and that all grains be “whole grain rich.”

SNA claims that these regulations, that guarantee kids are getting a healthier school lunch than just a few years ago, are causing students to reject school food.

Yet as far back as 2007, Ronnei told the Washington Post that she agreed with the conclusions of a study that had just come out of the University of Minnesota showing that kids did not reject healthier school meals. Ronnei told the Post that the percentage of St. Paul kids eating school lunches increased during the same time the district had been offering more fruits and vegetables.

But by 2014, when she became Vice President of SNA, the woman who just the year before had insisted that kids “like green beans – I’ve seen it myself,” and who advocated for changing kids’ tastes by repeated exposure to healthier foods, had changed her tune.

In May 2014, NPR reported “[Ronnei] says there’s another problem with the current rules — kids just don’t want to eat their vegetables. But now, schools are required to make students take at least one serving of fruits or vegetables.”

She complained to the Minneapolis Star tribune that her district was no longer able to serve “familiar foods” like white rice or all-white-flour biscuits because of the “whole grain rich” requirement.

But as someone with a School Nutrition Specialist credential, Ronnei understands that refined white rice contains little nutritional value as compared to brown (whole grain) rice.

As for those biscuits, maybe they are using the wrong kind of flour. Naturally students are going to reject a biscuit that is dark brown when they are used to a golden color – who wouldn’t? But why not make biscuits using the lighter-colored whole grain flour made from hard white wheat, which is exactly what Ronnei did during that 2013 focaccia taste test?

Has Jean Ronnei pivoted from being one of the leaders of the healthier school lunch movement to being just another shill for SNA’s Big Food sponsors?

Some at SNA must have wanted her as their President pretty badly, as the post traditionally is filled by a current food service director. In 2013, Ronnei was promoted from food services director for St. Paul Public Schools to Chief Operating Officer for the district.

As COO, she “oversees Transportation, Facilities, Information Technology, Nutritional Services, and Security and Emergency Management,” according to the SPPS website, which also stated that “a new leader will be appointed to fill Ronnei’s former position as Nutrition Services leader.” The SPPS website now lists Stacy Koppen, MS, RD, as director of SPPS Nutrition Services.

Despite no longer serving as food service director for her school district, there is no doubt that Ronnei is qualified to lead SNA. The question is, where will she lead them?

Maybe SNA will become more responsive to what some of their members are saying about the organization, both openly and in private. Beyond Chron recently ran a series of articles written by two members of the Union of Concerned Scientists, highlighting some of the many silly excuses SNA has put forward to explain their efforts to gut the HHFKA nutrition regulations.

After reading the series, one longtime Northern California school food service director and SNA member, who wished to remain anonymous, told me:

“I once again chose not to attend SNA’s annual conference for all the reasons given in all these articles.  I do not need vendors shoving junk food propaganda down my throat. That is not the reason I am a member of this association.

“I truly value many of the people around the country who are doing a great job attempting to  provide REAL FOOD to  the children in their area of responsibility. I miss not attending SNA’ Annual National Conference and networking with all these great people from food service and industry. Not all of them have sold their souls to the devil.

“SNA does not speak for me, nor I for them.  At the same time, I do not believe that we need to start all over with SNA. The membership at large should speak up, but they don’t because of their close affiliations with the people who represent Big Junk Food.”

Even newly retired Iowa Senator Tom Harkin, in addressing attendees at a recent conference on child obesity, called SNA a mouthpiece for Big Food. When a 30-year veteran of the Senate Agriculture Committee calls out an organization that is supposed to be focused on better nutrition for kids, as merely shills for agribusiness, it’s clearly time for a change of course.

What’s more, although some wealthier students who pay full price for their school meals did stop eating in the cafeteria beginning as long ago as 2008 (well before the HHFKA rules took effect), the most recent preliminary data from the USDA reports a .6% increase in the number of kids eating school lunch between April 2014 and April 2015. That increase represents nearly 200,000 more kids choosing a healthy school lunch.

So the SNA mantra that healthy food is driving kids away from school meals isn’t backed up by facts.

It’s time for SNA to abandon that claim, as well as the ill-advised strategies of insisting that the HHFKA nutrition standards put children at risk for too little (rather than too much) sodium in their diets, or that it is impossible to produce bakery items kids love using 51% whole grains, or that kids don’t like fruits and vegetables – all myths that Ronnei herself has disproved in her own district.

Jean Ronnei would certainly be the woman to get that job done. During her long career in food service, including more than 20 years in charge of St. Paul’s school meal programs, and now as COO of her district, she has displayed the kind of diplomatic but uncompromising leadership and innovative thinking, as well as concern for the children she serves, that is just what is needed to get SNA back on a productive path to healthier child nutrition.

As Jessica Donze Black, a child nutrition expert with The Pew Charitable Trusts and a longtime observer of the school food landscape, recently told me:

“It’s time for us to focus all of the amazing energy and drive that child nutrition professionals exhibit toward moving forward and finding solutions that will be best for kids while doable for schools. The goal should not be to make fruits and vegetables optional, but to figure out how to get more kids to eat them. Not to serve less whole grains and more sodium, but to fix the distribution channel issues that sometimes make better products less accessible.  And not to strive for waivers, but to advocate for the additional resources needed to invest in our kids and make a great program even better.”