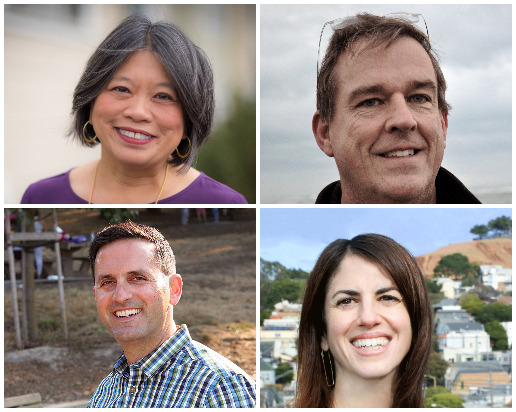 Today launches the supervisor careers of Sandy Fewer, Hillary Ronen, and Ahsha Safai and District 8 appointee Jeff Sheehy. Due to the difficulty of defeating elected incumbents, the three supervisors will likely have eight years to make a difference for their districts and the city.

Will they do so? Here’ s my opening assessment.

Sandy Fewer has the same progressive politics as the departing Eric Mar, but a far more outgoing personality. Her likeability has won terms on the School Board before being elected supervisor.

For all of Mar’s visionary policy ideas—and his image was unfairly tarnished by his principled opposition to McDonald’s using toys to attract kids to unhealthy foods, a stance that is now commonly accepted—he was not a player in City Hall policy debates. Fewer will be an equally reliable progressive vote and labor ally on key issues but I foresee her taking a more active role in the deal making around legislation at City Hall.

Will Fewer simply continue Mar’s voting pattern? I certainly hope she more aggressively embraces more housing opportunities for all income levels in her district. San Francisco cannot solve its housing crisis by ignoring new development in District One;  Fewer’s predecessors have not wanted to touch this political third rail, and it is now her chance.

I thought Alex Randolph would be the mayor’s choice, but he was edged out in a close decision by Sheehy. After reading of Sheehy’s formidable policy record, that he is the first HIV-positive supervisor, and is the parent of a child in public schools, his selection is understandable. The Mayor’s camp badly wants this appointee to win election. Sheehy is a public school parent with a long record of civic accomplishments; this likely makes him a stronger candidate against expected challenger Rafael Mandelman than Randolph.

Given that Sheehy ran no election campaign I’ll defer discussion of his future agenda.

I always saw Ronen winning the D9 Supervisor’s race because she was backed by the district’s two prior and still popular supervisors. So after serving as David Campos’ top aide, will Ronen chart a political career any different from her former boss?

Ronen will remain a solid progressive vote. She will also follow Campos in prioritizing immigrants, as her husband is coordinating the Public Defender’s funding request for undocumented immigrant representation.

But here is to hoping that she breaks from Campos by offering sites in progressive Bernal Heights for homeless services. There is nothing “progressive” about politicians targeting these services to low-income communities that already have more than their share while keeping them out of their own neighborhoods. This has gone on for too long in San Francisco.

Safai represents the biggest change from his predecessor, John Avalos. Avalos spent more energy in the last four years whining about Mayor Lee than he did serving his constituents, as was clear in Chronicle columnist David Talbot’s softball exit interview with Avalos last week. I still think Talbot’s selection was a good idea but his unquestioning promotion of Avalos’ slanders against the Mayor reminded me that I wrote upon his hiring, “Talbot will have to decide whether he wants to continue to write to his core base or try to influence those who do not share his fervent opposition to the mayor.”

He has thus far chosen the former.

Safai will become the first D11 supervisor to prioritize bringing resources and concrete benefits to the district. During the campaign he arranged an affordable housing project to be built at 915- 917Cayuga in D11, only for Avalos to file ethics charges against him for doing so. Safai’s background is in providing neighborhood services. Helping small businesses and promoting neighborhood revitalization will top his priority list, in addition to securing affordable housing.

D11 should be full of affordable housing developments for families. It has great neighborhoods for kids and land is cheaper and more available than in the Mission.  D11 has needed a supervisor who can work collaboratively with developers and small businesses, and Ahsha Safai aspires to do this.

All in all, I think the four new supervisors bring impressive talents to the Board and San Francisco will be well served by their enthusiasm and commitment.  Let their honeymoon period begin….