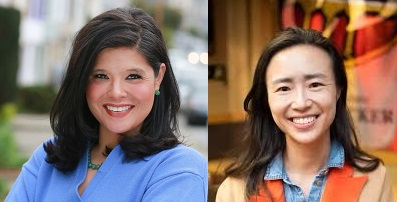 Philhour and Chan Divided Over Housing

San Francisco’s D1 voters have elected the “progressive” supervisor candidate in every election since district elections resumed in 2000. Will 2020 be different?

Marjan Philhour, who lost a close race to Sandy Lee Fewer in 2016, certainly hopes so. Connie Chan, the rival candidate backed by “progressives,” wants D1 voters to stay the course.

Since 2000 D1 (which primarily includes the Richmond District) has elected Jake McGoldrick, Eric Mar and Sandy Lee Fewer. All three were in the city’s “progressive” camp. All three also had a name recognition edge on their opponents which Connie Chan lacks against Marjan Philhour.

In 2000 McGoldrick ran against Michael Yaki, a Willie Brown appointee to a citywide Board. McGoldrick was a Richmond District tenant leader since the late 1980’s and was appointed to the Rent Board by Mayor Agnos. He had a far deeper connection to D1 voters than Yaki and was likely better known to district voters.

In 2008, progressive Eric Mar ran for supervisor following eight years on the School Board. He had a huge name recognition edge over chief rival Sue Lee, who had never been elected to local office.

In 2016, progressive Sandy Lee Fewer also ran for supervisor after eight years on the School Board. This name recognition edge helped her defeat Marjan Philhour by a 39%-34% margin.

Mar and Fewer were highly regarded for their progressive stands. Their victories were not simply about superior name recognition. But when you look at all the district supervisor races, greater name recognition is a key factor in victories.

Philhour is running against a rival who has not previously appeared on a San Francisco ballot. Will this and other factors make a difference?

Here’s our take on what should be a very close race.

The mother of three kids, Marjan Philhour was born in the French Hospital at 6th and Geary in the Richmond. She ran for supervisor in 2016 and runs a small business in the community. Philhour was a senior advisor to Mayor Breed prior to launching her current campaign.

Philhour would be the most pro-housing supervisor elected in D1. Her victory would increase chances for new apartments to be built on the Richmond’s traffic corridors and help get housing built throughout the under-developed Westside.

Chan is backed by the same forces who agreed with Fewer’s housing agenda. Philhour offers a very different housing strategy. She also expressly links housing policy to climate change, which Chan has not (as I describe in Generation Priced Out, San Francisco’s “progressive” supervisors have not supported infill housing as a strategy for reducing climate change).

Do D1 voters favor new housing? Or are they content with limiting new affordable and market rate housing to the handful of San Francisco neighborhoods that allow it?

This election will help answer that question.

Philhour’s chief disadvantage is that Chan won the coveted San Francisco Democratic Party endorsement. Unlike D7’s Myrna Melgar, who got that endorsement while losing at progressive clubs, Philhour has few allies in the city’s “progressive”  camp.

2020 sure fits the bill. And the value of the Party endorsement this November is even greater considering 1. Voters are focused far more on national issues 2. Door to door talks to voters is prevented by COVID and 3. Trump and McConnell have made San Francisco voters even more loyal to the Democratic Party.

On the other hand, the D1 supervisor’s race is nonpartisan. The San Francisco Democratic Party went years without making supervisor endorsements for that reason.

Philhour’s higher name recognition, deep community roots, and strong activist campaign can overcome the power of the Democratic Party slate card. It may also help that many will vote by mail; slate cards are most effective because they are easily taken to the polls while those voting at home have access to ballot handbooks and other materials.

A mother of a young boy, Connie Chan moved to the Richmond in 2011. She was aide to D10 Supervisor Maxwell in 2006 and joined Supervisor Aaron Peskin’s staff when he returned to the Board in 2016.

I was unfamiliar with Chan outside of her role as Board aide when she announced her candidacy. But she has secured the endorsement of nine supervisors and major clubs. Chan has won support from the groups and individuals that expected to be backing Sandy Lee Fewer’s re-election campaign.

Chan’s message to voters is clear: if you liked how you were represented by Eric Mar and Sandy Fewer, I am your choice.

That may be all she needs to win.

But I have my doubts. I see Chan as a much weaker candidate than her winning predecessors.

First, she has less name recognition than her opponent.

Second, she enters the race without having a strong political identity of her own.

Third, her endorsements from 9 of the 11 on the current Board of Supervisors may cause some undecided voters to ask why her voice is needed on the board. Her ideological perspective is already amply covered.

I’ve long seen the Richmond as a bellwether for San Francisco. Based on David Binder’s polling for our 1992 Prop H rent relief campaign we made the Richmond our top neighborhood priority. We believed that if we won the Richmond we would win the first ballot measure victory for tenants—and we did.

A lot has changed in San Francisco not only since 1992 but since 2016. We’ll know a lot more about the city’s values by the winner of this race.