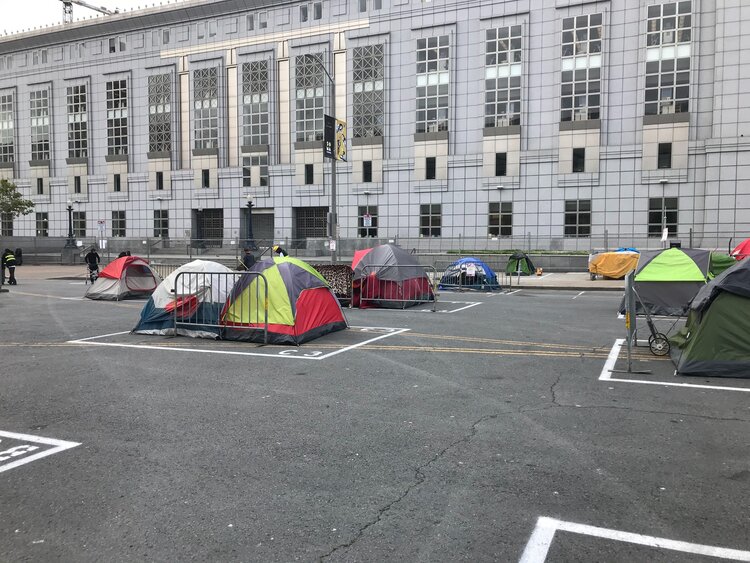 The question then emerges: will San Francisco use these new funds to house the unhoused or only seek band aid solutions?

The answer should not be a mystery: city officials have long said that the lack of funds was the only major obstacle to solving widespread homelessness. Now a lot of the necessary funding is here.

But take a step back.

San Francisco has maintained tens of millions of dollars in Prop C funds since September. In the past six months it has only acquired two new supportive housing hotels — both helped by state money. Meanwhile, the San Francisco Chronicle reported last week that San Francisco is spending $61,000 annually for each of the 262 persons in the city’s “safe sleeping villages.”

That’s a lot to pay when the city could have spent much less and better served tent dwellers by referring them to permanent supportive housing. Rooms were available in the city’s master leasing program at a small fraction of the cost. Further, the city has long had a formal list  of over 70 hotels interested in selling or leasing for homeless housing. Yet no offers to any of them have been made through today.

It’s so much cheaper for the city to house people rather than keep them in tents that the city would have saved money even if the housing were rent-free. And as I recently wrote (“San Francisco’s Failed Homeless Strategy,” Feb 23), the city has given few tent dwellers  the option to pay rent in master lease hotels. This is set to change this week, but does not explain why for months San Francisco has spent more to keep people in tents than to house them in homes.

Don’t blame the pandemic for this skewed policy. Many of those displaced when the city’s large shelters shut down due to COVID moved to SIP hotels funded 100% by FEMA. San Francisco had the resources to increase SIP hotel rooms but refused. Instead, the city created safe sleeping villages at $61,000 per person, the most costly and least effective anti-homelessness strategy of all.

San Francisco has never been exclusively dependent on FEMA funding to house the unhoused during the pandemic. Since the California Supreme Court’s September 9, 2020 denial of the final appeal of the city’s November 2018 Prop C ballot measure, San Francisco has had sufficient Proc C funds to acquire nearly 2000 hotel rooms.

But it has still not used those Prop C funds. Tens of millions of dollars that could house the unhoused still remains unspent, all while the city pays $61,000 per tent.

Why is this Happening?

Everyone who cares about San Francisco solving its multi-decade homeless crisis must be asking: why are we spending so lavishly on tents when permanent supportive housing is a cheaper and more effective alternative?

Where is our government’s sense of urgency? Why has securing permanent housing for the unhoused not been the driving force behind city homeless policy?

San Francisco’s Prop C funds have now been joined by nearly $19 million in federal homeless funding. Will this finally push the city to aggressively reduce homelessness?

But we cannot declare any progress or any victory until the city actually starts acquiring and opening new hotels.The longer San Francisco delays, the more cynicism about the city’s homeless strategy grows.

And a truly creative city would combine hotel purchases and leases with step-up rent subsidy programs for apartments. A very small program has been launched but it could be greatly expanded to landlords finding themselves in the rare position of needing to lower rents to attract tenants.

There is so much that San Francisco can creatively do to end homelessness for thousands. In contrast, inaction and bad policies come at a cost.

People lose confidence in government’s ability to sharply reduce homelessness when they learn that the city is paying $61,000 for people to live in a tent in a parking lot. People sleeping on sidewalks are not  given a housing option—despite San Francisco sitting on tens of millions of dollars that could house them.

Many of us have had to repeatedly challenge the completely false view that a lack of funding is not the chief obstacle to slashing homelessness. But San Francisco is in a new place. For the first time ever it has the resources to meaningfully reduce homelessness among single adults.

It really comes down to the public and political will. And that will decide whether San Francisco uses its new resources for tents, shelters, or homes.