Will Voters Back Housing on Nov. 2? 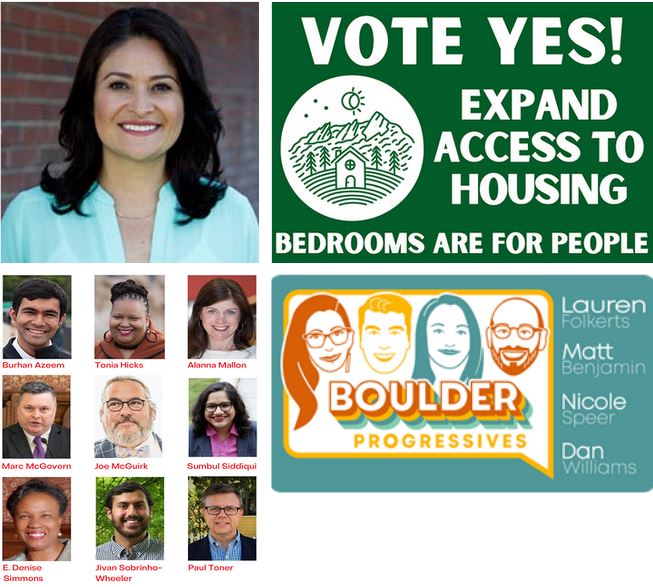 Next Tuesday is Election Day. Voters in Boulder, Cambridge and Seattle—three cities I write about in Generation Priced Out: Who Gets to Live in the New Urban America  — —will decide whether to pursue more inclusionary housing policies. In addition, New York City is headed toward electing a mayor (Eric Adams) who supports upzoning affluent neighborhoods for affordable housing. Boston’s mayoral favorite Boston (Michelle Wu) publicly supports rent control.

So there’s certain to be some good news. How will the other election results play out?

Here’s our take on these races and others.

I have been blown away by the powerful campaign waged by Boulder’s Bedrooms Are For People campaign (Vote Yes on 300!). Its social media campaign combines humor, clever framing and powerful messaging. Encouraging Yes on 300 letters to the local papers is also a savvy move. The initiative simply allows Boulder residents to do what people in most cities take for granted:  live in a household with more than three unrelated people so long as each has their own bedroom.

Boulder’s council currently bans four unrelated people from living together in a five bedroom house. This particularly makes no sense in a city that is home to a major university. I learned in writing my book that Boulder’s progressive, new age reputation conceals the city’s larger anti-tenant, anti-density agenda. Boulder risked heading down the exclusionary path of Palo Alto until activists won major council victories in 2019. Boulder housing activists never gave up fighting for their city’s future.

Next week’s election offers Boulder a chance to continue its momentum toward change. Boulder’s council campaigns are linked to two slates divided by views on development. Matt Benjamin, Lauren Folkerts, Nicole Speer and Dan Williams are the strong pro-housing, pro-inclusion candidates. I believe that the wonderful campaign run by Yes on 300 will carry it to victory and hope the pro-housing feeling  carries over to the council races.

We’ll let you know how they did.

No American city is more politically divided over housing policy than Cambridge, Massachusetts. Two competing slates vie for power, with the winner deciding what if anything gets built in the high-housing cost city.

Generation Priced Out discusses Cambridge’s housing politics and describes how one incumbent councilmember described allowing new apartments in single-family home districts as akin to the bombing of Pearl Harbor. And he won with that message! The pro-housing slate won a large enough majority in 2019 to pass the historic Citywide Affordable Housing Overlay in October 2020. The Overlay is a national model for all “blue” cities.

Cambridge has all of its seats up for re-election each cycle. This year’s pro-housing slate, backed by A Better Cambridge, includes Burhan Azeem, Tonia Hicks, Alanna Mallon, Marc McGovern, Joe McGuirk, Sumbul Siddiqui, Denise Simmons, Jivan Sobrinho-Wheeler, and Paul Toner. Mallon, McGovern, Siddiqui, Sobrinho-Wheeler and Simmons are incumbents. This means that at least one newcomer will have to be elected for Cambridge to maintain its pro-housing supermajority.

The nation’s single most important race for progressive housing policies is Seattle’s mayoral contest between Lorena González and Bruce Harrell.

I describe in Generation Priced Out how Seattle was years ahead of other cities in promoting infill housing, housing density and connecting both to increased affordability. Seattle’s former mayor Ed Murray pushed progressive housing reforms to help address skyrocketing housing prices triggered by the rapid expansion of Amazon and other corporations.

But pressure from the Seattle Times caused Murray to back off from legalizing apartments in all  single family neighborhoods. Jenny Durkan’s victory in 2017’s mayor’s race over progressive housing activist Cary Moon solidified the exclusionary housing status quo.

Lorena González supports making Seattle a more inclusive city. She is backed by labor, tenants and the city’s progressive forces. Yet polls have her trailing or at best tied with Bruce Harrell, a former councilmember who will continue Durkan’s policies.

Homelessness is the top election issue. As Mayor, Durkan runs the city’s homeless program but some voters wrongly blame the more progressive city council—which includes González—for the problem. Seattle is also divided over views of the police.

The younger, renter households that back González are less likely to vote in off year local elections. The all-mail ballot election will boost turnout, and labor and other progressive activists are waging a huge GOTV campaign. Nevertheless, these off year local elections typically slant turnout to older white homeowners who are the backbone for exclusionary zoning. Should Harrell win, Seattle progressives must make aligning local elections with state and national a top priority.

My sources in Seattle feel the race could go either way. Final results will not be know for days if a close race; we will keep readers posted.

New York City’s Eric Adams effectively won the mayor’s race with his Democratic primary victory. It’s premature to predict his housing agenda but he has to be better than Bill de Blasio.

Boston’s mayoral runoff  may have been eclipsed by the Red Sox’ unexpected run. The race has gotten little national attention despite Michelle Wu being in a strong position to become the city’s first elected woman mayor and first of Asian-American ancestry. A lot of voters have been eager to jump on the “Wu Train.”

I’m impressed that Wu is an outspoken supporter of rent control. oston desperately needs this affordability and tenant protection but a November 1994 ballot measure bars rent control in Massachusetts. Considering the anti-rent control measure only passed 51-49% in one of the most historically conservative national election cycles (it made Newt Gingrich House Speaker), a Mayor Wu can hopefully lead for a new ballot measure ending the ban.

Boston’s former mayor Marty Walsh was pro-housing in an old-school way. Wu could be just what Boston needs to increase inclusion, and she is heavily favored to win.