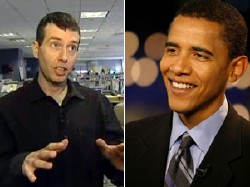 After Barack Obama’s presidential campaign built the organizing skills of thousands of young activists, many hoped that his organization would spawn a new entity to keep many of these folks working fulltime for change. The Obama campaign was the best incubator for activists since the UFW of the 1960’s and 70’s, and created a great opportunity — which I describe here— to build a network of experienced organizers that could boost progressive change for decades. Late last week, Obama campaign manager David Plouffe finally unveiled plans for “Organizing for America” (OFA), appointing veteran campaign organizer Mitch Stewart as Executive Director. Plouffe did not indicate how many fulltime organizers would be hired, but did reveal two critical facts that could hamper OFA’s effectiveness: OFA will operate under the auspices of the Democratic Party, and will not be used to pressure congressional Democrats to back Obama’s agenda. While OFA is committed toward mobilizing grassroots action for universal health care and other Obama priorities, its impact will be limited if targeting moderate to conservative Dems — whose votes will be needed to enact the President’s agenda — is off-limits.

Since Barack Obama’s election, there has been overwhelming support for a new organization that would allow the Obama organizing efforts to continue. Support for building a post-election field campaign to implement the president’s agenda was voiced at 4,800 house meetings held in December, in a campaign organizers meeting in Chicago, and in 500,000 surveys in response to Plouffe’s request for input.

Notwithstanding this clear signal of support, the New York Times began its January 26 story describing a former Obama organizer who was uncertain about continuing his involvement. The uncertainty of this single person is then said to reflect the type of “obstacles” to such a new organization — even though the Times notes in paragraph fourteen that demand for such an entity is high.

So let’s be clear: there is no shortage of Obama organizers eager to keep working for change. The only question is whether an effective vehicle will be created to give them this opportunity.

Although many felt strongly that the new organization needed to be independent of the Democratic Party, OFA will work out of the Democratic National Committee’s headquarters and Jennifer O’Malley Dillon, the DNC’s new Executive Director, will play an important role.

Given DNC’s control of OFA, it is not surprising that Plouffe insists that the new group would not “pressure members of Congress to support Mr. Obama’s programs.” He told the Times that “this is not a ‘call or e-mail your member of Congress’ organization.

The reason most saw DNC control of OFA as problematic is that the biggest obstacle to Obama’s agenda is fellow Democrats. If OFA will not support grassroots mobilizing campaigns against such officials, then its effectiveness is clearly going to be limited.

To be sure, issue-based organizing can build political momentum without targeting specific politicians. And Plouffe is correct in emphasizing the value of getting Obama’s key talking points out to independents and even some Republicans.

But imposing such limitations on OFA’s work will likely make the organization less attractive to potential organizers. And what do such organizers do when moderate to conservative Democrats are the obstacle? Once OFA declares that it won’t pressure Democrats, it essentially renders itself useless in such situations, leaving activists to work with groups that lack such a self-imposed limitation.

The creation of OFA, and its hiring of fulltime organizers to mobilize for change, could be seen as a good first step. Although Plouffe claims that serious fund-raising has not begun, that the staff will be relatively small (less than fifty), and that the lack of staff will be addressed through technology, one could argue that the groundwork has been laid for an entity that can ramp up personnel as needed and ultimately recreate the organizing culture that permeated Obama’s campaign.

But OFA’s design could also be seen as a missed opportunity to create a large cadre of social change organizers who could build progressive movements for decades, as occurred with Cesar Chavez’s UFW.

This requires an independent organization free to mobilize public pressure against congressional Democrats who oppose such Obama priorities as universal health care or the Employee Free Choice Act. If OFA organizers are prevented from building grassroots pressure against these officials, such organizers are unlikely to remain in their jobs.

Since hearing from someone who attended the Chicago organizers meeting, I have been concerned that the new entity would put too much faith in technology at the expense of additional organizers in the field. My concern appears to have been justified.

For all of its technological innovations, the Obama campaign was effective because of its field operation. As MoveOn.org and other groups barrage people with email alerts, OFA risks becoming just another message in the junk mailbox, rather than a physical presence in local communities.

OFA Director Mitch Stewart has the skills to make the group a landmark training ground for organizers, and to build grassroots support for the Obama agenda; let’s hope that Plouffe gives him and OFA the chance.