Will Minneapolis 2040 Live Up to its Promise? 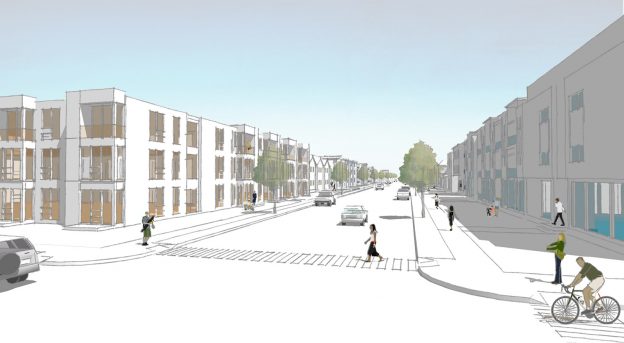 The City of Minneapolis invites comment on the Built Form Rezoning Study through October 19th.

Minneapolis spent 2018 discussing the merits of the Minneapolis 2040 plan. As a city, there is wide consensus that we face three critical and interconnected challenges:

No one policy or action created these challenges, and there is no silver bullet. The adopted Minneapolis 2040 plan includes a 10-year workplan of 100 unique policies aiming at these challenges. The City Council paired the plan with ordinances or inclusionary zoning and tenants rights, and more affordable housing investment. Another critical solution is reforming our zoning code. This will allow affordable homes in historically exclusionary neighborhoods, and add more homes to every neighborhood in the city – especially those closest to transit. We need all the solutions!

To achieve the goals in the plan, the implementation must be as ambitious as the plan itself. The built form recommendations are one key part of charting a different future. The Interior zone recommendations in the Built Form Rezoning Study do not implement the commitments made in the Minneapolis 2040 plan. They are a status quo recommendation. The status quo preserves our racial disparities, our worsening housing affordability, and makes it hard to achieve our climate mitigation goals.

2040 plan promised a mix of land use solutions:

Minneapolis 2040 promised a return to an older pattern of development. That’s the pattern that shaped most Minneapolis neighborhoods, before we imposed suburban-style single-use zoning in the last major zoning code revision in 1963. That code segregated uses, segregated building types, and segregated people by income and race.

While the plan didn’t include much detail, there were helpful images in the plan. The three Interior designations recognize that our neighborhoods have dramatically different characters. If we want new additions to them to fit in, Lowry Hill needs different rules than Waite Park or Howe or Stevens Square.

These Minneapolis 2040 graphics illustrate the intent for Interior 1. This includes the parts of Minneapolis furthest from Downtown, like Camden or Nokomis.

These Interior 2 images show what to allow in “parts of the city that developed during the era when streetcars were a primary mode of transportation, in the areas in between transit routes, and on select streets with intermittent local transit service.” 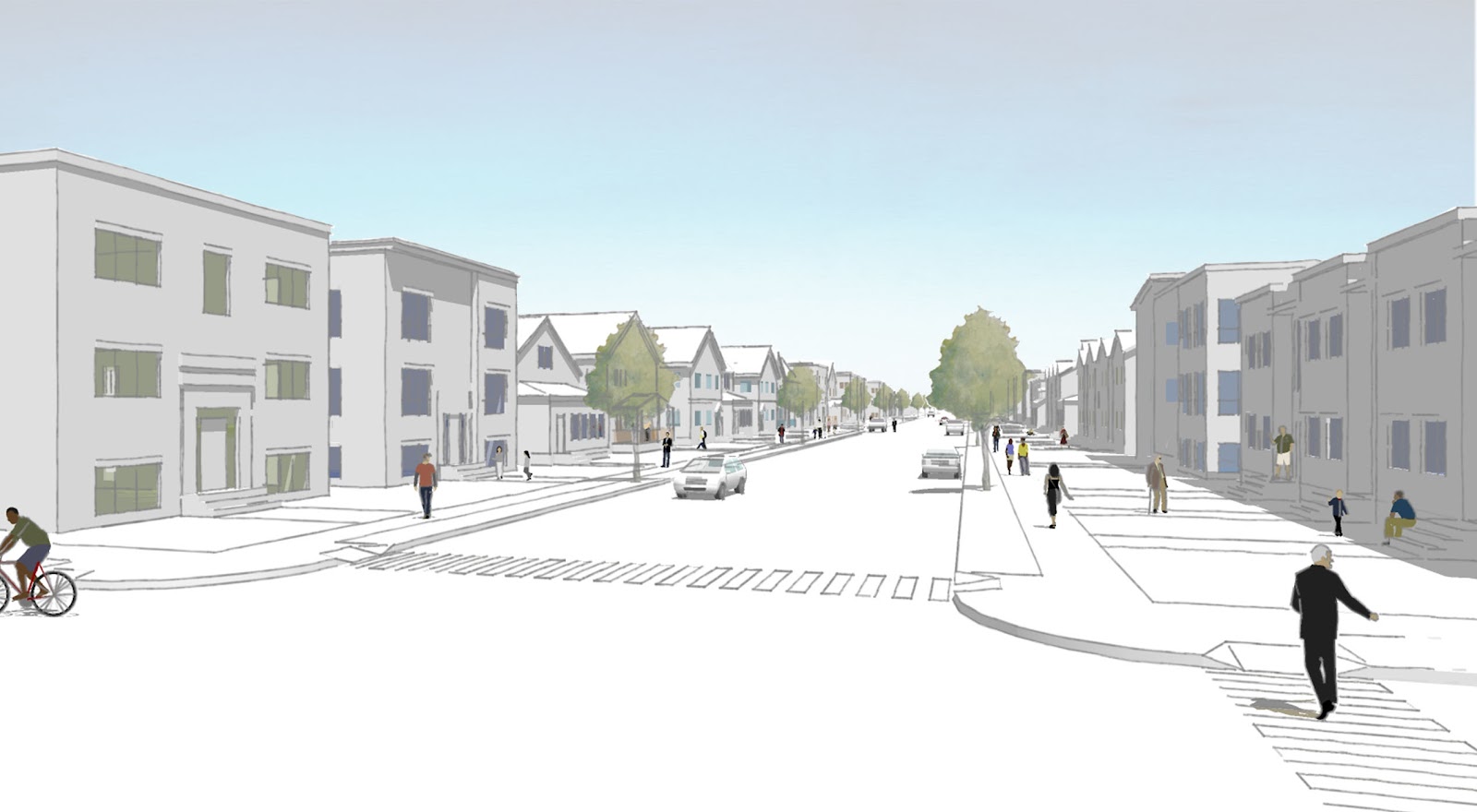 Interior 3 is “city closest to downtown, in the areas in between transit routes.” These images show what Minneapolis 2040 will allow in neighborhoods like Whittier, Stevens Square, or Marcy Holmes.

The Built Form Rezoning Study translates the 2040 plan into detailed ordinance language. It has two core goals, to align the plan and the code, and to create predictability for people building in Minneapolis. Our zoning code hasn’t been significantly updated since the 2000 comprehensive plan. The inconsistencies between the zoning and the 2010 comprehensive plan (thanks to Section 437.585 of Minnesota State Law that states the comp plan takes precedence over zoning if there is a conflict), meant that nearly every project required a variance.

So, how does this recommendation rate?

I give the Corridor and Transit area recommendations a positive review. They work for new construction, and the premium system is a smart way to incentivize what we as a city agreed we need in Minneapolis 2040. I dislike the specific premium that encourages building enclosed parking. If you are allowed more building with enclosed parking than without it, that’s an incentive for more expensive rents and parking, even while we know more parking encourages driving and what we want is less driving.

The Interior recommendations, however, miss the mark. In particular, Interior 2 and Interior 3 are status quo recommendations. They won’t allow us to build more homes that match the older pattern of development that shaped most of the neighborhoods.

On the other hand, Interior zone neighborhoods are where we implemented exclusionary zoning. It’s where we face the challenges with McMansions and teardowns. Those Interior zones are where we most need change to undo our past mistakes. These neighborhoods have been encased in amber for decades, with development limited to McMansion construction, because by definition they had exclusionary single-family zoning. Whether you dislike McMansions or crave Missing Middle homes, it’s clear that the zoning in our residential neighborhoods failed to get the outcomes we want and need. Undoing failed zoning by basing new rules on the development that occurred under that failed zoning is a cycle doomed to repeat past failures. If you want to get the diversity of buildings we used to have, you have to work back from what you want.

The City Planners and the Planning Commission need to press “Pause” on the current Interior recommendations. The City needs to take two next steps. First, review what was adopted in Minneapolis 2040. Second, restart the research for Interior neighborhoods.

It is unquestionably disappointing to delay adoption of these changes. But, getting this right is the only way we can allow enough additional homes in exclusionary areas that we can begin to undo the harms of exclusion. Exclusion drives racial disparities, boosts housing costs, and grows climate-changing emissions from car-dependent neighborhoods and large energy-hogging homes.

This is an incredibly complex shift that we are taking on. We must leave behind a prescriptive 1963 zoning code that imposed suburban values of homogeneity and too-big lots onto our historically diverse and affordable neighborhoods.

There may not be enough in-house staff capacity to take on this large shift. I suspect that the reason the process worked from recently approved projects is that the data is accessible. I suggest we budget to hire Opticos or another experienced form-based zoning code expert to evaluate our existing neighborhoods and develop recommendations. Beyond the question of capacity, Minneapolis is a national model. If we don’t get it right, we may make it more difficult for other cities to reform their zoning.

I hope this revision will eliminate (or dramatically reduce) minimum lot sizes. 10-15% of homes in Minneapolis are on lots that are below the current minimum lot size of 5,000 square feet – my spouse’s home is one of six in a row of 3,100 sqf lots. There are nine homes on his side of that block. All the homes are 100+ years old, and they are the definition of what is typical — and most affordable — in the neighborhood.

These are buildings common in Interior 2 neighborhoods, photographed walking around my neighborhood. They provide disproportionately more homes than other buildings nearby. The walk-up apartments are an important part of the mix with duplexes or triplexes, single family homes, with a mansion tossed in here and there. Some are 3½ stories with four levels of apartments and flat roof nearly filling the lot. Let’s make sure our soon-to-be-adopted floor-area-ratio (FAR), set backs, and lot coverage allow us to build more of them.

The below buildings are common in Interior 3. Again, let’s make sure we can add more where we have our best transit, most walkable streets, and easy access to groceries and a host of other services.

I hope we’ll add a “Premium” to all Interior neighborhoods, specifically for building affordable homes. Set the standard high, with the premium of an increased FAR if half of the units built are deeply affordable. That model, recently passed by Portland, promises to offer greater affordability in every neighborhood with reduced subsidies.

The Time is Now!

To get this right, we need to start by evaluating existing buildings, the ones that feel right to us as we wander our neighborhoods. Assess the whole mix, the walk-ups, the duplexes and triplexes (and even fourplexes!), and don’t forget the subdivided mansions. We need to assess typical building widths and heights, set-backs, and floor area ratios. Then, working backwards from what’s already in the neighborhoods that we love, work out what rules we need.

So, let’s get this right. If we do, we can both welcome more people in our city and renting or buying a home will be more affordable. If we get it wrong, we’ll make it cost-prohibitive to build more homes, low income renters and homeowners will continue to be displaced, our racial disparities won’t budge, and people who can’t afford our city will drive even more sprawl. The last time we made a revision to our zoning code this major was 1963. If we don’t get it right now, we may have to wait for 2087.

Share your thoughts on the draft built form regulations in the rezoning study here. You have until October 19th. If you like the goals of Minneapolis 2040, if you want to end racial disparities, if you want more affordable homes, if you are all in on mitigating climate change, it’s time to show up and comment and contact your city council member again.

Janne Flisrand spends her time thinking about how people interact with the space around them. Can everyone afford a home, in the neighborhood they choose? She’s a co-founder and active volunteer with Neighbors for More Neighbors. @janneformpls @MoreNeighbors

This piece first appeared in Streets.MN